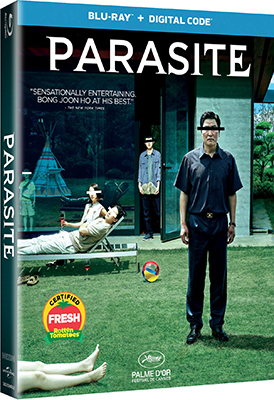 Writer-director Bong Joon Ho’s Parasite became something of a media darling for its clever satire of economic class disparities.

The story follows the impoverished Kim family, barely earning a living doing odd jobs in a slum in South Korea. When the eldest son gets an opportunity to take on a tutoring job for the daughter of the wealthy Park family, he quickly devises a plan for the rest of his family to be hired for household positions, though without the Parks knowing they are all related.

In some cases, this involves forging documents to support false backstories, not to mention setting up the current servants into getting fired without raising a fuss.

The Kims begin enjoying their newfound income stream when the former housekeeper returns and introduces a new twist to the story that the Kims couldn’t have anticipated in their scheming. The sudden subversion of expectations brings a much darker tone to the film.

The film is dazzlingly directed and visually enticing thanks to some excellent set designs, particularly the spacious Park household and the filthy basement apartment of the Kims. The details of each location become vitally important to the story and serve almost as secondary characters unto themselves.

A lot of the praise and awards heaped upon the film, however, seem to be a reaction to the economic motifs at the heart of the story, the effectiveness of which depend largely on the preconceptions of the viewer. The characters are largely defined by their social status, and the film does little to provide much context as to why they are in the position they are to begin with. This might otherwise be an issue when the film wants us to sympathize with a family of criminals simply because it expects us to feel sorry for them for not being rich.

The only genuine moments of character development don’t occur until after the plot contrivance of the third act is introduced, leading to a string of events that might not always ring true beyond the film’s superficial messaging.

The Blu-ray includes a 20-minute bonus Q&A with Bong who, speaking through a translator, discusses the crafting of the film and the subtexts of his story, though a lot of his motivations come across more as platitudes than a fundamental understanding of the issues he’s trying to explore.

The lessons presented by the film are rather obvious ones, but that doesn’t mean they couldn’t use a bit more scrutiny.