The two platforms combined for 42 million subscribers during the most-recent fiscal period. 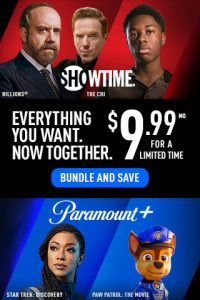 The ad-supported Essential Plan combines marquee sports, including NFL games and more than 2,000 soccer matches each year, with on-demand entertainment options spanning the full suite of current and upcoming shows and movies, as well as breaking news through CBSN. The Premium Plan features commercial-free, on-demand entertainment with 4K, HDR and Dolby Vision and mobile downloads; an extended roster of must-watch sports; and live streams of local affiliates in over 200 markets across the United States.

“Paramount+ and Showtime are both experiencing tremendous growth and momentum, and we expect this competitively priced bundle to only further expand the reach of both services,” Tom Ryan, CEO of ViacomCBS Streaming, said in a statement.

Showtime, which launched in 1976 as a movie distribution channel along with HBO and Cinemax, continues to make its mark across the cultural landscape with lineups in original television programming, including series “Billions,” “Your Honor,” “The Chi,” “Dexter,” “The L Word: Generation Q,” “City on a Hill,” “Work in Progress,” “Flatbush Misdemeanors”, “American Trust” and “Back to Life,” along with limited series “The Good Love Bird” and “The Comey Rule.”