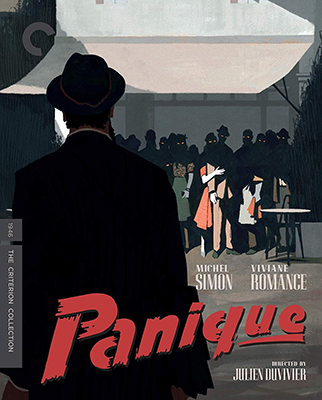 Director Julien Duvivier’s Panique, a French-language adaptation of a Georges Simenon novel just after the end of World War II, features Michel Simon playing an anti-social man of mystery residing in a Paris suburb and rendered a target of mob-rule suspicions after a woman’s body is discovered following her outdoor murder. Dialogue and performances are top-rung, but this is one exciting movie to watch as well.

Every time I’m jolted by a personal movie “discovery” these days, it’s usually via some Criterion release of a foreign-language film I hadn’t previously seen. Relatively recently, we’re talking Il Sorpasso, I Knew Her Well and El Sur — and now it’s Julien Duvivier’s Panique, which Rialto Pictures (pause here for a bow and curtsy to them, and I’m not kidding) previously re-issued for theatrical re-release. Of course, maybe this one shouldn’t have been as much of a surprise to me.

Panique was Charles Spaak and Duvivier adapting a Georges Simenon novel just after the end of World War II in 1946 — and not just any Simenon (whose book-to-screen incarnations were endless) but one subsequently made into a second movie that I also like a lot. This would be 1989’s different-in-particulars Monsieur Hire, which made my annual USA Today runner-up 10 following its U.S. release a year later and still holds up. Even so, and despite Hire lead Sandrine Bonnaire’s familiar Dimples-to-Die-For, I think Panique is the better film — and this despite the fact (per critics Guillemette Odicino and Eric Libiot on the Criterion bonus interview) that it’s less faithful to the source novel. To no small extent, male lead Michel Simon gives Panique an added edge, and so does its more kinetic stylization.

Sticking strictly to Blu-ray over standard DVD, the advanced format allows one to trace the arc of this bear-like actor’s career trajectory, from the all-region import of Jean Renoir’s 1932 Boudu Saved From Drowning through Cohen Media’s issue of 1967’s The Two of Us, which was such a popular arthouse hit when I was in college that even the so-called one on my Midwest campus took a break from its substantial diet of Radley Metzger and Isabel Sarli features to show it. “Underplaying” wasn’t exactly Simon’s middle name, but in Panique’s case, he’s remarkably subdued playing an anti-social man of mystery residing in a Paris suburb and rendered a target of mob-rule suspicions after a woman’s body is discovered following her outdoor murder. The guy is kind of weird — just for starters, he snaps photos of just about everything that happens in he neighborhood — but he’s kind to children (though this adds to suspicions), and the automatic leap to suspected murderer isn’t any forgone conclusion. Particularly since …

… the new kids in town (Viviane Romance and Paul Bernard — who, actually, are both past the spring-chicken stage in appearance) are not the types to whom you’d entrust your last franc. Nor probably even, if you’re the town’s bigoted butcher (Max Dalban) — though this admittedly colorful supporting character is all too willing to dump hastily-reasoned vitriol on Simon when push finally comes to shove. Romance (has any actress who exuded carnality ever had a greater name?) is newly sprung from prison after having taken a rap and resulting incarceration for guilty squeeze Bernard, who responds by faking insolvency when she requests a little stipend to bankroll some needed (i.e. non-luxurious) clothes. By contrast, Simon is far more sincere in his mostly unrewarded affection (Romance puts on a good act of bogus sincerity) and comes out of his shell to such a degree in revealing a soul of some depth that even she’s a tad moved in the later going. It doesn’t hurt that Simon has seen her only half-dressed and languishing in her room in her apartment across the courtyard — though, as in the book (I’m told), Patrice Leconte’s 1989 version plays up the voyeuristic angle far more prominently. What’s more, Michel Blanc, who has the Simon role, may even be less ingratiating than he is as conceived on paper. Which doesn’t make him a murderer.

ialogue and performances are top-rung, but this is one exciting movie to watch as well. Duvivier, who had just returned to France from a Hollywood he didn’t like, employs tight closeups with the shady lovers early on, but goes fully panoramic when he wants to put the business district’s hustle-bustle on full display or to show in a long shot how isolated Simon is from the rest of the town. And though “Hitchcockian” long ago exhausted its tenure as an overused adjective, critic Libiot makes a good case for the degree to which Panique almost had to have been an influence on three of Sir Alfred’s subsequent features. (Of course, a Vertigo lookalike here hits like a full-barreled shot between the eyes.)

As usual, Criterion is imaginative in its choice of bonus extras — though I didn’t expect the great Bruce Goldstein of Rialto and New York’s rep-house cathedral The Film Forum to appear in a wonderful primer he personally put together on the do’s and don’ts of subtitling, a total delight that’s all but amazing in its explanation of issues that wouldn’t occur to most people. (Lenny Borger did the new translation here, and we can see how superior it is to pitiful attempts that shortchanged audiences at the time). Son Pierre Simenon, also an author, is personable with blood-engendered insights both personal and professional, and there are separate print essays by Borger and James Quandt, each well versed in French cinema and in Duvivier explicitly. Both make the point that the film wasn’t well received at the time, though many now think it’s the high point of Duvivier’s career. And though there few or no specific head-on references to World War II, they both note the degree to which a fallout undercurrent (French guilt, mob rule) runs through much of what we see.