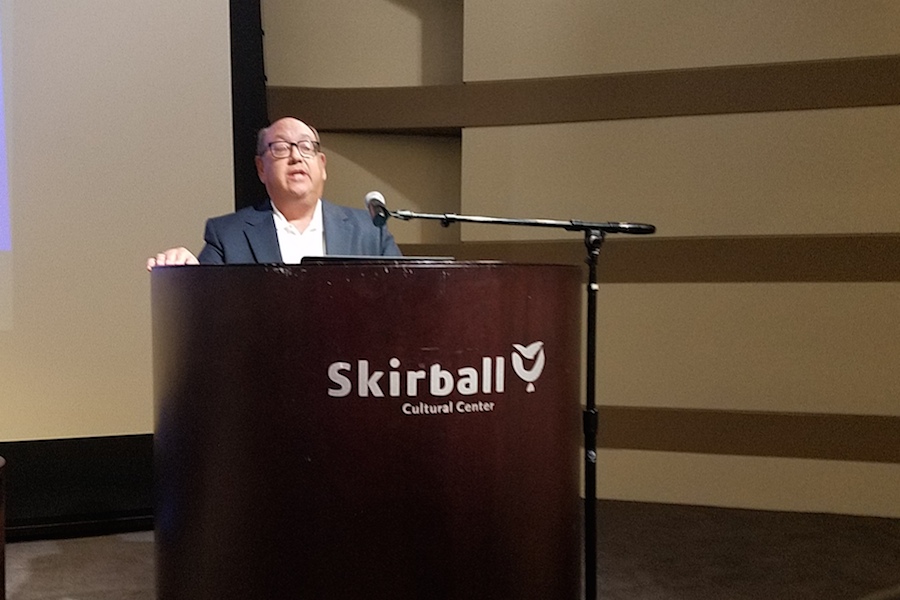 President and CEO Mark Fisher speaks at the OTT_X Pipeline conference in 2019.

A little more than a month before the start of a launch of a wave of big-name SVOD services, panelists contemplated the effect that the new, deep-pocketed players would have on the OTT marketplace at a Sept. 25 conference in Los Angeles produced by the Entertainment Merchants Association.

EMA president and CEO Mark Fisher noted a change in the title of the annual event from Digital Media Pipeline to OTT_X@ Pipeline.

“That’s our leaning in and supporting all over-the-top distribution, embracing SVOD [subscription] and AVOD [ad-supported] as well as TVOD [transactional], which we had primarily been supporting in the past,” he said.

In opening remarks, he noted the shifting landscape.

“While SVOD continues to have runaway growth and EST continues to reinvent itself and to promote consumer ownership, AVOD, a format that an industry sage used to refer to as ‘where titles go to die,’ has become all the buzz,” he said. “Frankly, with the launch of WarnerMedia’s subscription service, Disney’s subscription service, Apple’s subscription service, Universal’s service, and Hulu and Netflix and Amazon Prime as well as Britbox, CBS All Access and so many others, I believe even more consumers are going to be driven to cut their cable subscriptions and get all their content either through OTA or OTT and there is likely going to be a limit to what most customers are going to be willing to spend. And when they hit that limit, they’re probably still not going to have enough content available compared to what they’re used to with the hundreds of channels on cable, and they’ll end up supplementing that with AVOD channels. So I think many of us believe that next year will not only bring growth in migration in SVOD services but also unprecedented growth in AVOD.”

That theme of how the market would change with an explosion of new OTT entrants was echoed by panelists throughout the day.

“The entertainment industry has become as susceptible to change and as volatile with change as the broader technology industry itself,” said Cinedigm Networks president Erick Opeka, who moderated the “Future Evolution of OTT” panel. “Gone are the days of the stability that many of us in this room became accustomed to, where you had 10, 12, 15 years between cycles of technology adoption.”

Mining a niche is a good way to compete with the big guys, panelists said.

“I believe there’s a lot of white space for passion-driven verticals that are underserviced,” said Natalie Farsi, founder and CEO of upcoming lifestyle channel SMART.

Ed Laczynski, CEO of Zype, added a niche OTT player can succeed “where there’s a high level of affinity and or passion and there’s a scarcity of content within that group.”

“I think there are many companies not necessarily asking, ‘Why are we launching an OTT or why do we need to be present on OTT?’” she said.

As SVOD services proliferate, AVOD may be a strategic move for smaller players.

“It seems to me that a lot of players that had started as subscription are going to be making a pivot to an ad-supported model,” said Opeka.

“With AVOD, we’ve still got about 82 percent of the U.S. that’s gonna want to watch ad-based content because they don’t want to have to pay for all of these services,” added Jeffrey Goldman of Premiere Digital Services.

Transitioning to AVOD “hopefully will be a better business model for us,” said the Africa Channel’s Sheila Cole on another panel, “Managing the Business of OTT.”

“The ad-supported space is growing very, very quickly,” said ComScore’s Vince Muscarella. Recent ComScore research showed that the growth in hours viewed per household for ad-supported services is outpacing even subscription viewing. Ad-supported hours were up 60% in May-July 2019 from May-July 2018, while subscription hours grew 44% during the same time period.

David Sidebottom of Futuresource reported that AVOD is a “very U.S. phenomenon,” with one in five Americans having used one of these services in the last month, according to his research.

Still, internationally, as in the United States, “what we see more than anything is fragmentation in the marketplace” with consumers offered “huge choice,” he said. But every international territory is not the same. Netflix is driving SVOD growth in France and Germany, for instance, with TVOD starting to pick up in Nordic region.

Other changes noted at the conference were the impending launch of a new website and OTT newsletter from the trade association, as well as a push for diversity. Indeed, the conference included a panel on the subject and featured a diverse group on the dais.

“This is the first conference that it’s not just a bunch of us old white guys up on stage,” said the EMA’s Fisher. “We have 48% of our speakers being female and at least the start of integrating more underrepresented minorities and people of color into our program.”

He credited Parrot Analytics’ Alejandro Rojas, who presented research on OTT profitability, for pushing the organization to embrace more diversity.