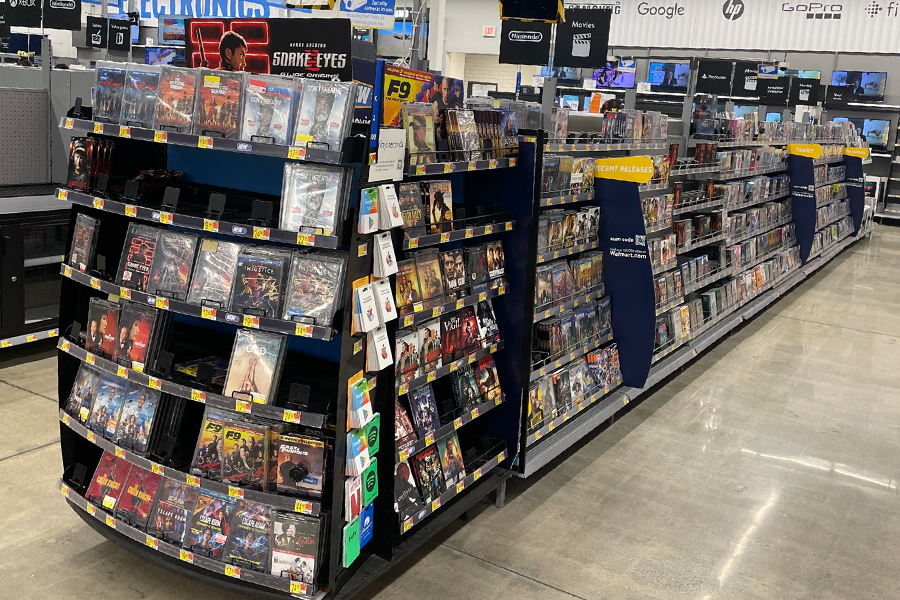 Blu-ray and DVD section at Walmart in Santa Ana, Calif., in October 2021.

Fewer titles, empty new-release shelves and understaffed departments are just a few of the issues still affecting packaged-media retailers due to the pandemic, based on observations from weekly store visits in Southern California by Media Play News.

Over the past few months, many Target stores, a number of which have been redesigning their layouts and specialty departments in general, have seemingly cut in half the amount of shelf space in their electronics departments devoted to packaged-media movies and TV shows.

A typical Target layout now involves a new-release display up front, with a single aisle of high-profile catalog and recent releases. Aisles dedicated to 4K Ultra HD discs and boxed sets have largely disappeared, as more shelf space is being devoted to collectibles such as Funko Pops, increasingly popular manga comics, and more books and vinyl records (the latter, ironically, as CD shelf space decreases).

The story is similar at Best Buy locations, many of which now have just a new-release display near the front entrance, and a single aisle of recent discs toward the middle or back of the store closer to the HDTVs. Best Buy locations had been shrinking their DVD and Blu-ray sections for years to make room for a larger mobile phone footprint, a trend seemingly accelerated by the pandemic. A store in Costa Mesa, Calif., converted the area in the center of the store once dominated by DVDs and Blu-rays into a staging area for online order pickups.

“I think a lot of the shelf space issues have to do with COVID,” said Bill Hunt of packaged-media enthusiast site TheDigitalBits.com. “Retailers had been stocking less physical media even before the pandemic.”

One casualty of Target’s reduction in shelf space for discs is the removal of an area dedicated to promoting the 4K Ultra HD Blu-ray format. In fact, aside from new releases, 4K copies of movies are hard to come by at Target and Walmart physical stores. Likewise, bulkier TV boxed sets and movie collections are now mostly absent from physical locations. Most chains now prefer to make 4K discs, collector sets and other niche catalog fare available through their online stores.

In many instances, retailers such as Target, Best Buy and Walmart have been slow to stock new-release shelves on Tuesdays, the traditional date for new Blu-ray Disc and DVD releases. Depending on the location, shoppers used to seeing updated new-release displays on Tuesday mornings now might have to wait well into the afternoon or evening, if not the next day, to find the titles they are looking for on shelves.

Discussions with store clerks point to product that might be late in arriving to stores, a side effect of lingering supply chain issues such as the number of replication facilities where the discs are made being reduced as the physical home entertainment industry continues to lose market share to digital delivery and streaming year after year.

This often leads to shelves looking empty as they haven’t been stocked with the new titles, or the limited supplies they have made available have sold out.

“While there are more titles coming out than ever, studios and replicators are having trouble getting a sufficient supply of product out to retailers on street date. So they’re all doing more business selling online,” Hunt said. “What I’m also hearing, in chatting with employees at the local Targets and Best Buys here in Orange County (Calif.), is that retail stores are having to make due with fewer workers,” Hunt said. “The stores have fewer people stocking the shelves. And the focus is on keeping shelves stocked with high-demand consumable goods — food, home supplies, medicine and personal care items. Movie discs aren’t a high priority.”

In one instance, a Walmart employee pointed to a box of DVDs sitting behind the counter and said they were waiting for a third-party vendor to arrive to set up the new-release display for that week.

A different week, a Target employee who was just getting around to resetting the shelf tags on the new-release kiosk on a Tuesday afternoon, when asked about a title released that day, said they were still in the back and that no one could have them until someone had the time to bring the box out (typically a store clerk, when asked for a specific item the computer says is in stock, will at least go to the back and pull one from storage even if no one has been able to bring the rest of the boxes out).

The week of April 27, Disney-owned Searchlight Pictures perfectly timed the Blu-ray release of Nomadland for two days after the 93rd Academy Awards ceremony at which the film won the Oscar for Best Picture. However, copies of the film were nowhere to be found at major retail shelves on the day of its release. Target, Walmart and Best Buy all relegated the Nomadland Blu-ray to their online store. It received worse treatment at Amazon, which didn’t even list it until the day it came out, and even then only as available from third-party marketplace sellers (meaning Amazon isn’t selling it directly — likely another casualty of the e-commerce behemoth’s long-running disputes with Disney over physical media availability). Best Buy at least paired the Nomadland Blu-ray with a deal to get a month of Internet TV service Philo for $1.

One title that seemed to most epitomize retailer supply issues was Paramount’s four-movie “Indiana Jones” 4K Ultra HD Blu-ray boxed sets released June 8. Many fans reported a hard time finding them at retail, and even Amazon buyers took to Twitter and Facebook to complain about shipping delays because the online retailer didn’t have copies in stock yet. Target listed the 4K edition of the “Indiana Jones” collection as an online exclusive at $86.99, while touting the standard Blu-ray set as in stores at $39.99 in its weekly ad circulars, though shoppers reported little luck in finding any. Store locations in Santa Ana and Tustin, Calif., didn’t even have shelf tags for it.

The Digital Bits’ Hunt posted on social media that a clerk at his local Southern California Target store said that since they didn’t stock the 4K version, they were worried that just putting the Blu-ray edition on shelves would confuse customers, so they kept it in the storeroom.

Some shoppers reported a bit better luck at Best Buy, finding a handful of the exclusive $99 Steelbook version of the 4K Ultra HD Blu-ray set (which included a digital copy, but not standard Blu-ray versions). Unsurprisingly, many shoppers took to social media to say the set was sold out in their area.

A Walmart in Tustin, Calif., didn’t have the four-movie set, but did have a new Blu-ray and DVD version of just Raiders of the Lost Ark (reportedly just a repackaging of previously released disc configurations). The Blu-ray (with digital copy) was readily available at most online retailers for around $14.99, but the DVD version was a Walmart exclusive at $9.96.

Exclusive editions such as Best Buy’s “Indiana Jones” Steelbook and Walmart’s Raiders DVD continue to be a valued promotional tool for retailers to attract consumers looking for new titles, even as the packaged-media industry continues to decline.

“I think the exclusives tend to be produced further in advance and in small batches, so those are easier to prioritize,” Hunt said.

Best Buy has released so many Steelbooks that most stores have a special Steelbook section in the disc aisle. Online, Best Buy created the Steelbook Collector Hub, a page to provide information about the chain’s Steelbooks and to poll collectors about which new Steelbooks to produce. The Steelbook page also includes a section profiling a Steelbook collector with a brief Q&A.

Target also occasionally releases Steelbook exclusives, though not at the frequency of Best Buy. Examples the past few months have included Lionsgate’s Sicario and 31, both catalog titles.

Instead, Target’s go-to exclusives tend to be to pack the 4K or Blu-ray combo pack with collectible art cards or a booklet of behind-the-scenes material.

Walmart’s exclusive preferences tend to the more eclectic. These may range from lenticular covers (such as for The Suicide Squad), or gift sets (for example, pairing The Boss Baby: Family Business Blu-ray with a jigsaw puzzle, or family films with plush dolls).

Recent Disney Blu-rays such as Luca and Cruella have come with Walmart-exclusive box art and paired with an e-book tie-in to the movie.

For many Warner Bros. titles, Walmart might put out a DVD version with minimal extras that runs a few dollars cheaper than the widely released DVD. Or, in cases where the wide release is only 4K or Blu-ray, Walmart will have the DVD exclusively — typically the case with DC animated superhero movies such as Injustice and both parts of Batman: The Long Halloween, but also multi-movie sets such as The Conjuring 3-Movie Collection and Space Jam 2-Film Collection. Walmart also recently released exclusive DVD collections such as Universal’s Fast & Furious 9-Movie Collection and, from Warner, the Mortal Kombat 3-Movie Collection and a Godzilla/Kong 3-Film Collection.

Walmart focusing so many of its exclusives on plain-old DVD points to the stalwart format remaining the workhorse of retail disc sales even as it approaches its 25th anniversary (the first DVD players and discs were available in November 1996 in Japan), despite the existence of several next-generation HD formats.

Whether due to consumer stubbornness, the cheaper price during the pandemic, or chains such as Walmart continuing to champion it, DVD continues to dominate market share among the disc formats.

Walmart’s exclusive DVD editions account for a considerable portion of a title’s total sales, despite being available at just one of the big three major national home entertainment retailers, demonstrating Walmart’s outsized influence on the market. For instance, the Space Jam 2-Film Collection released Oct. 15 has seen about 44% of its total sales come from the Walmart-exclusive DVD version.