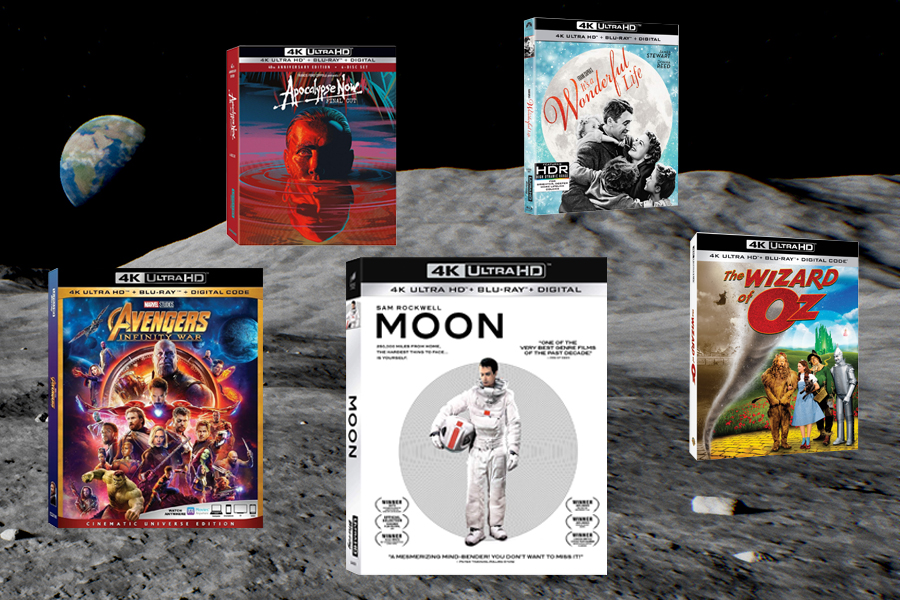 Filmmakers have long championed new home viewing technologies, but their support of 4K Ultra HD — particularly in director Duncan Jones’ case — is “over the moon.”

Jones directed Moon, a 2009 science-fiction cult favorite that won a BAFTA Award for Outstanding Debut by a British Writer, Director or Producer. And he was thrilled that Sony Pictures Home Entertainment decided to celebrate the film’s 10th anniversary in July with a 4K Ultra HD Blu-ray  release.

“Moon was a tiny little independent sci-fi film from England,” said Jones, who went on to direct Source Code (2011), Warcraft (2016) and Mute (2018). “The fact that we got a theatrical run in America at all was a thrill, but even with that run, a lot of people never would have had the chance to see the film in the fidelity of those who were able to see the screenings back in 2009. Fortunately the film has lived on and grown in cult status over the decade, but up until now has only been a shadow of its original self! Now we finally get to give our fans what they remember from those early, limited screenings.”

Jones — who also happens to be the son of the late rock legend David Bowie — is by no means alone. Directors such as Oliver Stone and others in the creative community applauded Blu-ray Disc when that format was introduced more than a decade ago, but their cheers are even louder and more enthusiastic for 4K Ultra HD — with high dynamic range (HDR), of course.

“It’s astounding how far home theater tech has come in the last 20 years,” said director Rian Johnson (Star Wars: The Last Jedi) at a recent UHD Alliance event. “I think we’re really kind of in a golden age right now of home theater technology, and it’s only getting better in every single aspect of our TVs at home. Everything in resolution, dynamic range, the size of the screens, everything has gone up through the roof recently, while prices of all the tech has gone down so it’s in the reach of most consumers, and that for me is really, really exciting. I love that my mom has a great TV that she can watch at home. I love watching movies at home.”

The resolution of 4K is four times sharper than HD, while HDR offers brighter brights and darker darks — as well as wider color gamut — to create a more vivid and lifelike picture. What that means is that home viewers can replicate the theatrical experience more closely than ever — and since directors are all about the “Big Screen,” they see 4K Ultra HD as the best way to archive their artistic vision for future generations.

“I think for anyone who spends time and effort making a film, we desperately want the audience to see all the little details and care we put into our work,” Jones said. “Especially for those who are lucky enough to make ‘world-building’ films. From production design, to wardrobe, make-up and, in Moon’s case, model miniatures, just about everything is created to hold up to scrutiny in a close up. 4K UHD with HDR gives us the pleasure of knowing you are going to see all that hard work!”

Studio executives, too, see 4K Ultra HD Blu-ray as packaged-media’s most effective bulwark against total domination by streaming media. It remains the optimum way to watch a movie, despite steady advances in bandwidth capacity.

So, apparently, do a lot of other people. Ultra HD TVs were in about 53.4 million households at the end of the first quarter, an increase of 55% from the prior year, according to CTA numbers cited by the DEG. Meanwhile, the number of households with at least one 4K Ultra HD Blu-ray playback machine rose 63% to 14 million. According to the CTA, the total TV category will ship 38.8 million units in 2019 (a 1% increase) with upgrades driven by big-screen models and sets featuring 4K UHD resolution and HDR technology. This year, 4K UHD sets will account for 17 million of those units (a 6% increase).

IHS Markit estimates that by 2022, 60% of North American households will own at least one UHD video display.

Software continues to expand as well. Nearly 600 titles have been released on 4K UHD Blu-ray Disc, according to Media Play News research. And digital outlets tout the feature, and sometimes charge a premium for it.

Indeed, consumer interest in 4K UHD with HDR continues to grow.
“I think people are definitely into it. I think interest is growing; demand is growing,” said The Digital Bits’ Hunt. “There’s no shortage of people who read my website that are eager for every piece of news on 4K.”

Retailers of both digital and physical content are serving the rabid 4K consumer. Netflix offers 4K UHD content under its premium plan for $15.99 a month (up to four screens at once). Amazon also offers 4K streaming on certain titles. At transactional VOD site FandangoNow, 4K is a major selling point, noted Fandango VP of home entertainment Cameron Douglas.

“We saw there was audience demand,” he said. “It just kept growing.”

Redbox in March reported it more than doubled the number of cities offering 4K Ultra HD movie rentals — bringing 4K to a total of 15 markets. Rental pricing for 4K UHD titles is $2.50 per night.

“Our customers have spoken — they love the quality of 4K content,” said Galen Smith, CEO of Redbox. “We’re happy to make 4K rentals available to even more movie fans, giving them more format choices than ever before so they can make the most of their movie night.”

“4K UHD continues to experience strong and steady growth across physical and digital, buoyed by the significant retail commitment and CE support, and an increasing number of titles being released,” said Eddie Cunningham, president of Universal Pictures Home Entertainment.

“4K UHD is no longer an early adopter format and has widely established itself as the best way to watch our content at home,” said Jessica Schell, EVP and GM of film at Warner Bros. Home Entertainment.

“We’re enthusiastic about the rapid consumer and retail adoption and the ability to present our films in the highest possible quality for the home,” added Lexine Wong, senior EVP of worldwide marketing at Sony Pictures Home Entertainment.

“The popularity of 4K continues to grow as evidenced by the wide range of titles now in the market,” noted Vincent Marcais, EVP of worldwide marketing for Paramount Home Entertainment.

“Sony Pictures Home Entertainment, a leader in the 4K Ultra HD market, consistently delivers premium product for the growing consumer base,” said Sony’s Wong. “To date, we have over 80 4K UHD titles available — including the global tentpoles Men in Black: International and Spider-Man: Far From Home, along with key library titles such as the commemorative 35th anniversary release of the original Ghostbusters and the fully remastered modern classic Stand By Me.”

“At Paramount, we just released Rocketman, and over 15% of our physical sales are 4K to date,” noted Marcais. “In addition, we will be releasing the perennial favorite It’s A Wonderful Life on 4K Ultra HD Blu-ray for the first time in October. The studio spent over a year restoring the film from the original negative and we wanted to make sure that enthusiasts and long-time fans could truly appreciate the vibrant and detail-rich picture, which 4K makes possible for home viewing like never before.”

“The continued diversification of content available in 4K HDR ranges across not just our new-release films, but also includes more and more evergreen classic catalog titles like 2001: A Space Odyssey, The Wizard of Oz and The Shining,” said Warner’s Schell.

“Catalog in particular has surged to become a meaningful driver of consumer engagement, with newly available classic franchises fueling a 25% growth in 4K UHD disc sales across the industry,” added Universal’s Cunningham.

Readers of enthusiast websites have feasted on new-release and a growing list of catalog classics that have greatly expanded this year.

“You had your big, splashy, superhero titles, but then you had Alien and Apocalypse Now,” noted Adam Gregorich, co-owner/editor of enthusiast site Home Theater Forum. “It’s not just new releases that people are interested in.”

“The biggest problem that people that are into 4K have is that there are titles that they want that they can’t get,” said The Digital Bits’ Hunt. “Fans are really starting to jones for those big titles now.”

Hunt’s readers are particularly looking forward to the 4K catalog releases on tap for the end of the year, including The Wizard of Oz, due Oct. 29.

“That film will look tremendous on 4K,” he noted.

“There is a ton of excitement for both The Wizard of Oz and It’s a Wonderful Life,” added Gregorich. How black and white films, such as Wonderful Life, would fare on 4K elicited “some concern,” Gregorich noted, “but then people pointed out Schindler’s List,” which translated and was enhanced very well.

Both Gregorich and Hunt agreed that the best way to experience 4K UHD with HDR is on Blu-ray Disc, which doesn’t suffer from the potential delivery dilution of streaming due to bandwidth.

“I think that discs are still more popular, but streaming has made up a huge amount of ground,” added Gregorich.

Soon, technology may offer a streaming assist, and studios are prepared to deliver 4K UHD wherever the consumer goes.

“With the expansion and adoption of 5G wireless service allowing faster access to streaming 4K UHD video, the demand for high-definition content will continue to grow rapidly,” said Warner’s Schell. “We are committed to delivering the best possible viewing experience of our wide array of film and television content, and we will continue to adapt, along with other studios and content providers, to the ever-changing technological landscape that dictates our business.”

One thought on “Over the Moon for 4K”