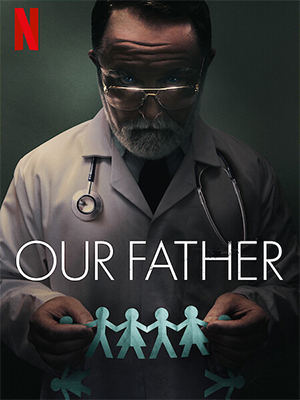 Our Father is a real-life horror thriller, exploring the disturbing results of power in the wrong hands.

The story starts with Jacoba Ballard, an only child conceived via donor sperm. An at-home DNA test led her to the discovery of not one, but seven half-siblings — a number that defied best practices in fertility medicine. As the group set out to learn more about their curious family tree, they soon found out the sickening truth: Their parents’ fertility doctor had been inseminating his patients with his own sperm — without their knowledge or consent.

Each new revelation in this film elicits an astonished gasp. The discoveries build in intensity as viewers learn the extent of this doctor’s carelessness, conceit and deceit. A well-respected member of the community with a family at home, he somehow found it necessary to break the trust of the women he treated, violating them in a most intimate way and playing God with his own offspring. These children now walk the world wondering if they may unwittingly bump into a half-brother or half-sister.

The horror is amplified by their father’s dismissive and cold attitude toward his enormous brood as they look for answers and take legal action. He seems incapable of comprehending the pain he has caused. Indeed, he remains a puzzle. Like his children, the audience is left wondering why he did it, what drove him and why he got away with it for so many years. If there is a weakness in the film, it’s that viewers are left with few answers about the man at the center of the story.

Still, Our Father brings up important moral questions and uncovers a blind spot in a legal system that was not set up to properly protect the rights of families created via fertility treatment. This left them vulnerable to a perverted man on the cutting edge of science who was fittingly caught by the availability of new technology — DNA testing.