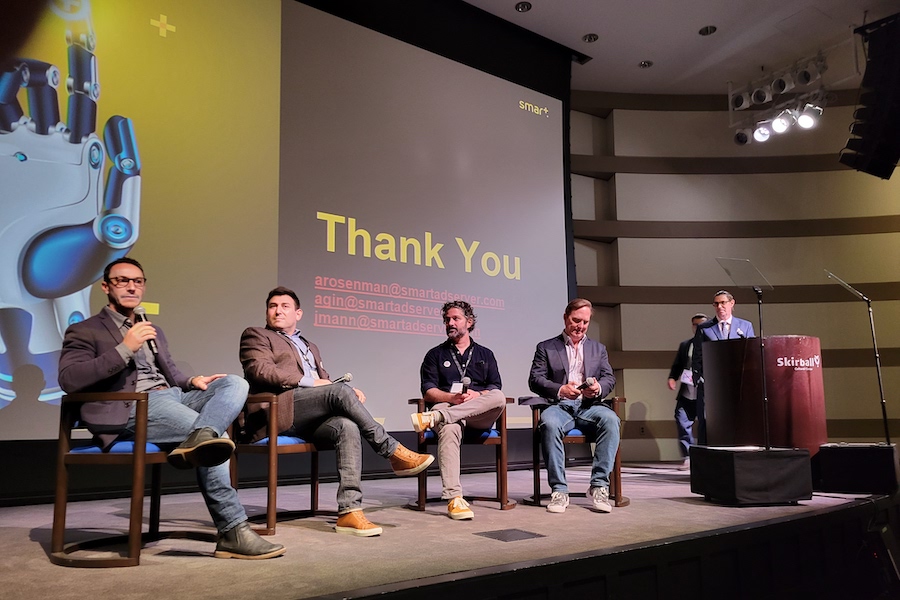 (L-R) Panelists Adam Bergman of Vizio, Sam Harowitz of Tubi, Anthony Layser of Xumo and Stuart McLean of FAST Studios with moderator Andrew Rosenman of Smart AdServer at the podium.

The event is an exchange consisting of pitches and presentations by prominent and up-and-coming AVOD and FAST (free ad-supported streaming) platforms, networks and channels to an audience of brands, advertisers and ad agencies.

In welcoming the crowd, Erick Opeka, Cinedigm chief strategy offer and one of the creators of the event, said XFronts was designed to help “build the next generation of great streaming companies.”

“For years, the [ad-supported streaming] business was tiny, incremental and frankly a rounding error,” he said. But now with Netflix and other major streamers looking at ad-supported tiers, he noted, “The rest of the industry is catching up.”

Prior to a panel titled “Is FAST Programming Moving in the Direction of Cable TV?” TelevisaUnivision’s Richard Hull said that linear streaming was indeed encroaching on traditional TV turf.

“You’re finally seeing a transition of all the linear dollars on broadcast and cable TV starting to move over to these free ad-supported platforms,” he said.

Panelists agreed that FAST services were the new frontier in the linear TV business that cable and broadcast built.

“We actually consider ourselves as being in the cable TV business,” said Stuart McLean, CEO of FAST Studios, which features numerous channels and is soon launching the Women’s Sports Network. “All of our teams come out of the cable business.”

“But there’s the data to back it up on who’s watching when,” he added.

“That’s something that cable’s never been able to do, [serve up ads] customized for the user,” added panelist Anthony Layser, VP, partnerships and programming, at Xumo, the OTT service provider owned by Comcast Corp.

Adam Bergman, VP of national ad sales for Vizio, which offers FAST services on its connected TV screens including its own WatchFree+, noted Vizio is a service just like cable “without the strings” and also pointed out streamers’ added power of data in serving advertisers.

“That’s my screen and my remote in your hand,” he said of the Vizio service. “I know more than anyone about what happens on my screen.”

Xumo’s Layser said the ad-supported business started to really take off in 2019. “The content doors started opening,” he said, noting that services such as Tubi, Pluto TV and Roku paved the way. “Since that time it’s very different in terms of the premium nature of the content,” he said, adding “more and more studio catalog is available.” Original programming in the space has also started to pop up, he said. Tubi has started to add originals, he noted with a nod to fellow panelist Sam Harowitz, VP of content acquisition and partnerships at Tubi.

“Our overarching strategy is to superserve passionate communities,” Harowitz said, noting that Tubi has a library of 40,000 titles. In measuring Tubi’s success, he looks at “the total view time that a customer is spending on our service.” Tubi is also built around machine learning, which helps to serve up better content to consumers the more they watch, he said, driving engagement.

While distribution is cheap in the marketplace, FAST Studios’ McLean said, “At the end of the day, you still have to have scale.”

As streamers jockey for distribution partners, carriage conflicts like those frequently experienced in the cable marketplace could become more common, said Vizio’s Bergman, pointing to the dustup between Roku and HBO Max.

“One will look to have the upper hand when maybe they shouldn’t,” he said, pointing out that carriers might say, “I am fine without your content if those are the terms.”

The first day of the conference also included company presentations with details about lineups, content promotion and other plans for the coming year. Presenting companies included FAST Studios, which highlighted the launch of the Women’s Sports Network with an ESPN and surf star; Cinedigm, which outlined its genre-based channels and a partnership with Roundtable Entertainment; Future Today, which highlighted its kids and family content; Plex, which spotlighted its new content discovery product; and AfroLandTV, which highlighted its African content and a move into original programming starting with an African food show.