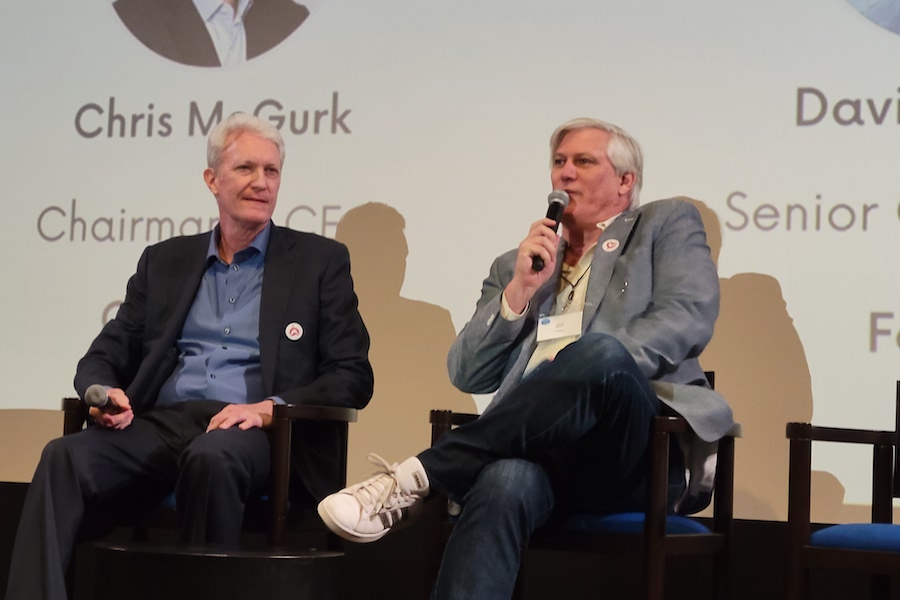 Speaking during an Aug. 31 presentation at the OTT.X Fall Summit in Los Angeles, he noted that over the years, “The one constant has been profound change.”

“In a business where the only thing for certain is rapid technological change, you’ve got to be ready every year or every two years to revisit your business model,” he said.

He recounted several key experiences during his career that involved embracing new ideas. At the Walt Disney Co. in the early 1990s, he was tasked with visiting tech giant Steve Jobs to discuss distributing Toy Story, with its innovative CGI animation. At the time, Disney was focusing on highlighting its traditional animation business.

“It was going to be the engine that was going to drive the company,” McGurk recalled, adding, “The fact is, there was a huge, raging debate going on whether we should distribute Toy Story or not.”

In a meeting with Jobs, he recalled telling the tech giant, “Some people at Disney don’t want to do this deal because they consider it blasphemy.”

“Some people at Disney are idiots,” Jobs replied, McGurk said.

McGurk noted, “We embraced the new technology and look what happened.”

In a later experience at MGM, he recalled the studio’s successful shift from trying to compete with the major studios on theatrical releases to instead focus on a newfangled product: DVD.

“We looked to technology as the answer, and right at that point the DVD business was beginning to take off,” he said. Thus, MGM made theatrical a “secondary business” and “built an operation that could squeeze more money out of DVD than everybody else.”

At Cinedigm, McGurk embraced new tech as well. After going through a transformation to a streaming company a few years ago, executives began to see that competing in the subscription business might be a “losing proposition for us” with the big players in the market.

“We began looking at the growth of connected TVs and the enhanced lean-back experience,” he said. That shifted the thinking to the free ad-supported model that the company now champions.

Now, big players are getting into the ad-supported model, including Netflix, where executive Reed Hastings had always eschewed ads as hurting the streaming experience.

Ad-supported streaming has a bright future, he said.

“It’s a given that the ad dollars flowing into the streaming business are going to escalate,” he noted.

“Our strategy is to let the big guys kill each other why we launch channels that are complementary,” he said, noting that the company has channels that are “very targeted at a very specific fan base,” such as the Bob Ross channel.

He sees coming consolidation among the big streamers.

“Those that have big debt loads and are thumbing their nose at the creative community … they’re not going to be around,” he said.

The days of just gathering loads of subscribers and pleasing Wall Street are ending, he said. Profitability and cash flow have become key.

“They look at it differently than they looked at it a year ago,” he said, noting “we were profitable last year.”

Engagement is also important so that streamers can serve up ads.

“We are trying to superserve these enthusiast fan bases,” McGurk said.

For instance, Cinedigm linked with Bloody Disgusting to beef up its horror content, with an accompanying podcast.

The Bob Ross channel, featuring the late painter, is the company’s most successful channel, he said, noting Ross is “like Mister Rogers for millennials and Gen Z.”

As part of Cinedigm’s exploration of AI, recommendation engines and other tech, the company is looking into creating a “deep fake” Bob Ross.

In addition to ad-supported models, international expansion is also a big opportunity for streamers as most countries outside the United States are behind. Cinedigm likes to partner with local operators to enter foreign markets, he said.

McGurk believes the future is bright for independent content creators. Previously, “You had a system that was controlled by six or seven major studios,” he noted. Now, there are “hundreds of opportunities to get access to eyeballs.”

In the next three to five years, he sees consolidation.

“You’ll probably lose two or three of the bigger streamers,” he said, adding there will be “more channels and fewer companies.”