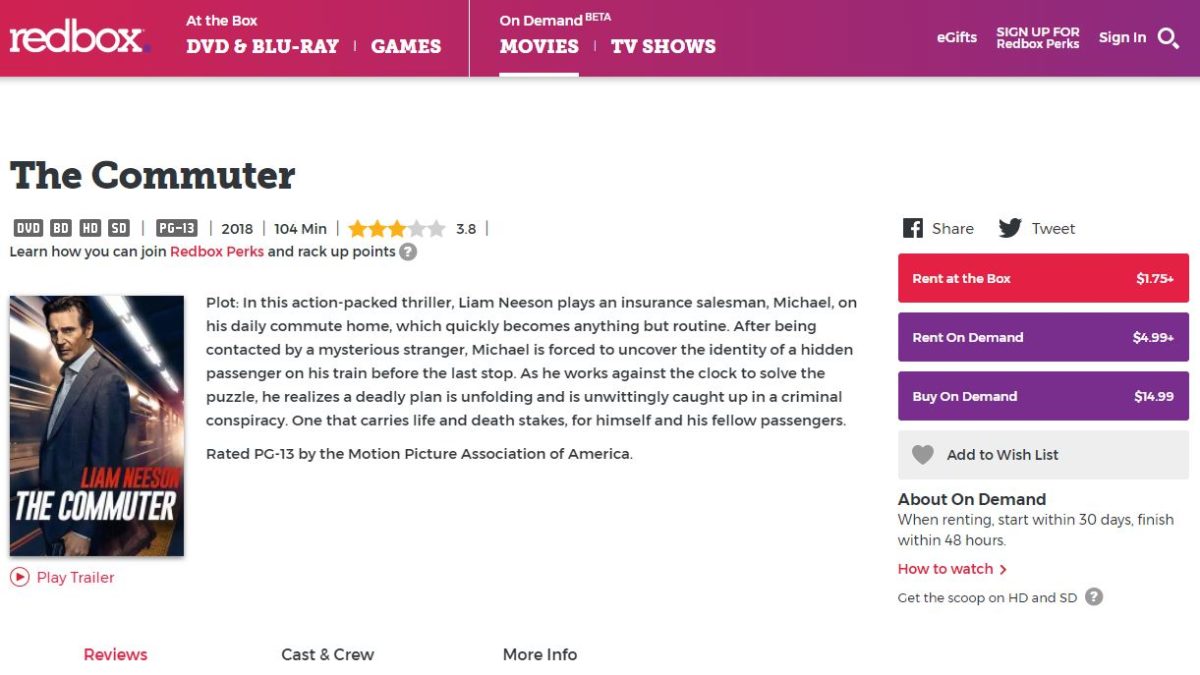 Redbox On Demand makes it easy to rent or buy movies - a great way to promote TVOD.

Getting people to buy movies and TV shows continues to be a hard sell.

Physical disc sales continue to decline, a problem partially of our own making. If we’re not excited about new releases, how can we expect consumers to be?

One studio executive recently stated, in public, that no one should be spending more than 5% of his or her time on the physical side of the business. I don’t get that — disc sales may be down, but they still generate a lot more revenue than digital sales.

Retailers, too, are snubbing the category — which only serves to accelerate the decline. The big box stores are devoting fewer and fewer square feet of floor space to DVDs and Blu-ray Discs, and the hardware end is suffering as well — despite the promise of UHD. At the local Walmart, I couldn’t find a single Ultra HD Blu-ray Disc player — unless you count a $59.95 Samsung machine that won’t play Ultra HD Blu-ray Discs, promising, instead, to “upscale” regular Blu-ray Discs.

And we wonder why consumers are disinterested — and confused.

Digital sales, meanwhile, have yet to take off because consumers simply don’t see the value proposition — not when a single new release costs more than a month of Netflix.

Back in the waning days of video rental, the industry banded together for a generic “awareness campaign.” Whether it worked or not is unclear, as DVD came along to save the day.

But I do believe it’s time to resurrect that idea, especially now that we have a gleaming white knight — Movies Anywhere — with so much promise, so much potential.

Movies Anywhere makes the digital movie purchase proposition simple, easy and appealing. Collectively, we need to spread the word.  Thanks to Big Data and analytics, targeted advertising has never been easier. Won’t someone take the lead and rally everyone together to really promote this marvelous new service in a big, big way?

We also need to recognize that just like back in the day when the video business was purely physical, there’s a rental component as well as a purchase component. Subscription streaming — which we in the industry call SVOD — is on everyone’s tongue. Transactional video-on-demand, or TVOD, is where the money’s at, and we need to promote both aspects of the transactional business and use digital movie rentals to spur digital movie sales.

Amazon and Redbox (with its recently launched Redbox On Demand service) both do a good job of this, giving consumers the option to stream a movie or buy it — but, again, more promotion is needed. Studios need to advertise their new releases and play up their availability not just for digital purchase but also for digital “rental,” as both Amazon and Redbox do on their respective websites.

Real-life example: A year ago, my kids had no idea they could buy or rent movies online — they either watched Netflix or YouTube, or ran down to see if I had gotten any new releases on disc.

Now, they’re at the point where they go online and rent movies all the time, even older ones. My youngest even rented the first Austin Powers movie for $2.99 from Redbox On Demand even though we have a physical copy in our library. He was simply too lazy to walk down stairs.

A week later, he bought all three, and they’re now living happily ever after on Movies Anywhere.

Our industry needs to take a big-picture look at TVOD and promote the whole ball of wax, not just the purchase option. Invariably, inevitably, one thing is going to lead to another.