Omdia is forecasting a further 10.5% growth in 2022 to take the figure to 1.48 billion by year’s end. With new services continually entering the market and, crucially, major players still only part of the way through their respective global expansion efforts, this means the market will continue to expand for several years and Omdia’s forecasts show the global total will exceed 2 billion in 2027.

“There are numerous reasons to be positive for online video’s prospects over the next few years, which are reflected in our forecasts,” Thomas said in a statement. 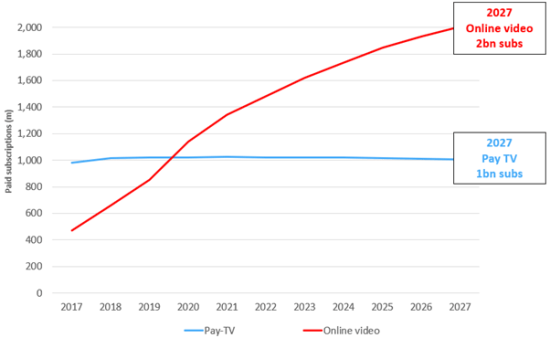 While SVOD numbers are growing just about everywhere, the scenario for pay-TV differs a great deal from country-to-country. Of the 101 markets that Omdia tracks, the outcomes show significant fluctuations, with 55 countries still reporting subscription growth, 41 reporting decline and five essentially static. Over the next five years Omdia expects those contrasting trends to continue, with countries like Indonesia continuing to post solid increases, while others — most notably the U.S. — seeing increasing declines. 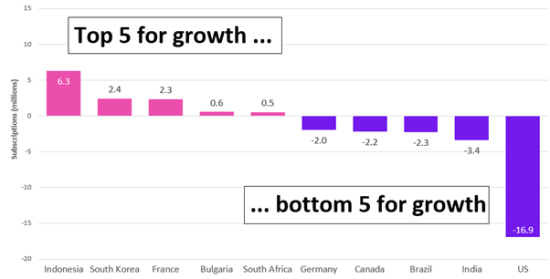 Thomas contends that with pay-TV as a whole plateauing, the TV and video business is becoming increasingly reliant on growth from online video. But with that business having been built on high content investment aligned with low subscription prices, a price-sensitive public has come to expect a lot of bang for their buck.

“The content costs versus pricing balancing act is a tricky one to navigate and we’ve already heard from Netflix that it expects to lose 2 million customers in this quarter,” he said. “It is quite clear that constant growth for online video is by no means guaranteed.”