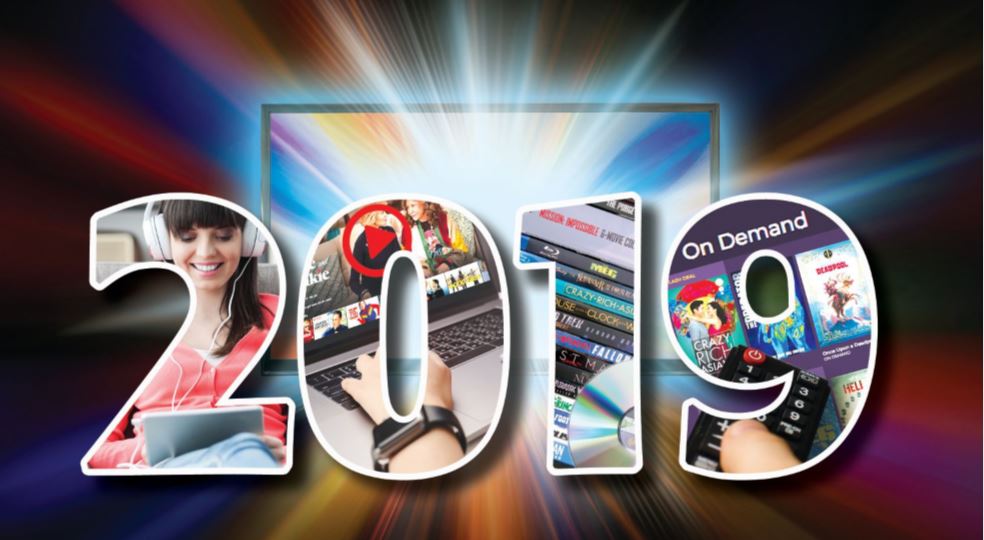 The phrase “transformational change” has been used so much it’s become a cliché — and yet there really is no better way to describe what happened in not just home entertainment, but also the entertainment industry overall, in 2019.

The completion in March of the Walt Disney Co.’s purchase of 20th Century Fox saw the number of major studios drop to five from six. Some of the home entertainment sector’s most familiar faces were suddenly gone, including Mike Dunn, the longtime leader of Fox’s home entertainment unit, and Danny Kaye, the visionary behind Fox Innovation Labs. Later, in the summer, Janice Marinelli, Disney’s home entertainment chief, also exited in a surprise move, given that she had opened an office on the Fox studio lot and was reportedly screening staffers.

Meanwhile, a new flavor of streaming gathered momentum: free to consumers, paid for by advertisers. Among the heavyweights jumping into what’s known as “AVOD” are ViacomCBS, with its Pluto TV acquisition, and Comcast Corp., which in December was reported to be in advanced talks to acquire Xumo TV, which boasts more than 140 digital channels of programming across 12 genres, including sports, news, kids and family entertainment.

The overall impact of all these developments on home entertainment: It got smaller — and bigger.

Smaller, because the traditional transactional business model that has defined home entertainment since its birth more than 40 years ago has increasingly come under fire, with subscription streaming, in particular, gobbling up more and more consumer attention — and dollars — that previously would have gone toward buying or renting movies, either on disc or through digital retailers.

But also bigger, because streaming, in its various incarnations, is now widely accepted as being part of home entertainment — which is now broadly defined as people watching what they want, on demand. There’s even a new name for all of this — direct-to-consumer — which was first adopted by Disney and is now used interchangeably with “home entertainment.”

Bob Buchi, president of Paramount Home Entertainment, says 2019 “was the year of transition.”

“From media mergers and changing consumer viewing habits to the explosion of streaming services, the landscape has shifted dramatically,” he says.

The Nov. 1 launch of Apple TV+ marked the tech giant’s entry into the content business, with nine original series. One of them, “The Morning Show,” picked up several Golden Globe nominations from the Hollywood Foreign Press Association (HFPA), a first for a new streaming service.

Less than two weeks later, Disney launched its much-ballyhooed Disney+, with a full menu of in-demand movies and series — including the “Star Wars” spinoff “The Mandalorian.” Disney said more than 10 million people signed up for the service in the first 24 hours. By the end of November, the service had 24 million subscribers, according to estimates from Wall Street firm Cowen & Co. (Netflix as of October had more than 60 million domestic subs.)

“It’s an exciting time and we believe we have a unique and significant role to play,” Ricky Strauss, president of content and marketing for Disney+, told Media Play News on the eve of the service’s launch. “Disney+ will compete based on the unparalleled strength of our brands, the quality of our intellectual property, and expertise in high-quality video streaming.”

And yet industry insiders insist that despite streaming’s growth, there’s room for transactional — largely because new theatrical films, particularly the blockbusters, aren’t available on SVOD services. This distinction has prompted FandangoNow, one of the big digital retailers, to boldly proclaim on its home page, “New releases not on Netflix, Amazon Prime or Hulu subscriptions.”

“Because we’re the first point of entry for fans to see movies in theaters, and first at home, we’ve seen a significant growth among consumers who are excited to own movies as soon as they’re available digitally,” says Cameron Douglas, head of FandangoNow. “Fans looking for high-quality content right out of theaters, including 4K HDR movies, don’t have to wait until they arrive later on subscription services, and innovative deals like rental binge bundles and the availability on new platforms keep them coming back to transactional digital services like our own.”

“New movie releases continue to be sought out by consumers during the first window in the home amidst the frenzied buzz around new streaming services,” adds Michael Bonner, EVP of digital distribution for Universal Pictures Home Entertainment. “While there’s no denying the landscape is becoming more competitive, this business has successfully co-existed with abundant availability of non-transactional content for a long time and we expect it to continue to do so.”

“There is space — and demand — for both transactional content as well as streaming — just as there is consumer interest in both digital and physical,” says Amy Jo Smith, president and CEO of trade association DEG: The Digital Entertainment Group.

Beyond new releases, streamers have a limited selection of older films and TV shows, particularly with their increased focus on original content.

“For many consumers, their streaming options are good enough,” says Mark Fisher, president and CEO of home entertainment trade association the Entertainment Merchants Association (EMA). “But just like the days when the first video rental stores opened and made it easy for the consumer to watch anything they wanted to watch when they wanted to watch it, online VOD retailers offer that same opportunity to the consumer. I know that every time I see a montage of old movie clips, I’m driven to watch titles that aren’t new releases — and these are titles not readily (or easily) found on the streaming services.”

Sales of digital movies, in particular, were a bright spot, with consumer spending up nearly 7% in the first nine months of 2019, according to trade association DEG: The Digital Entertainment Group.

“We’ve continued to see growth in EST (electronic sellthrough) — both in our new releases and in our catalog,” says Jason Spivak, EVP of distribution, for Sony Pictures Home Entertainment. “Certainly the enhanced consumer experience enabled by Movies Anywhere is part of that, as is increasing consumer connectivity in their homes. EST continues to gain prominence in our marketing planning, release data scheduling, and retailer partnerships.”

Ron Schwartz, president of Lionsgate Home Entertainment, says Lionsgate EST revenue grew 30% this year, “four to five times faster than the overall industry. With increased collaboration between studios and retailers, and more offerings such as dynamic bundling, customers are starting to build their lockers up to 10-plus titles. Recent data shows that once a customer gets to between 10 and 12 titles in their locker, their EST purchasing behavior doubles.”

In addition to selling movies, digital retailers also offer them for a la carte streaming, the digital equivalent of a physical movie rental. Redbox remains the only retailer to offer both digital and physical rentals, the former through an e-commerce site and the latter, through a network of more than 40,000 kiosks situated outside (or inside) large retailers like Walmart, convenience and drug stores, and other retailers.

“Redbox owns the transactional space with more transactions across physical and digital formats — for rental and purchase — than any other transactional provider,” says Redbox CEO Galen Smith.

In 2019, he said, Redbox expanded its offering of 4K Ultra HD discs into new markets, and stepped up promotions as well, with its Back to the Movies campaign and a joint Dinner & A Movie offering with meal delivery service DoorDash.

In addition, Redbox Entertainment, a new content acquisition and production division, has further transformed Redbox into a multi-channel content provider and programmer. Launched in October, the new division is headed by Marc Danon, who spent eights at Lionsgate, most recently as SVP of acquisitions and business development.

Disc sales in 2019 continued to decline in the low double digits, with DEG reporting that in the first nine months of the year, combined 4K Ultra HD, Blu-ray Disc, and DVD revenues were down 18.5% to an estimated $2.3 billion — exactly half what they amounted to five years ago, in 2014.

But studios continued to support the disc. And while a trend among smaller titles is to release them only on DVD and digital, bypassing Blu-ray Disc, major new releases are still getting significant marketing campaigns behind them, particularly for the 4K Ultra HD editions. The UHD disc also made headlines last August when the UHD Alliance, along with leaders in consumer electronics, the Hollywood studios and members of the filmmaking community, announced collaboration on a new viewing mode for watching movies called “Filmmaker Mode,” designed to reproduce the content in the way the creator intended. Filmmaker Mode, bowing next year, will allow viewers to enjoy a more cinematic experience on their UHD TVs when watching movies by disabling all post-processing (e.g. motion smoothing, etc.) so the movie or television show is displayed as it was intended by the filmmaker, preserving the correct aspect ratios, colors and frame rates.

“For the time being, 4K UHD is still the gold standard for at-home content,” says Jim Wuthrich, president of Warner Bros. Home Entertainment & Games. “With hardware costs dropping and television functionality such as Filmmaker Mode being made available next year, there is still a great value proposition in owning content in 4K UHD, both physically and digitally, as is still represents the best home-viewing experience.”

“As evidenced by the exceptional growth of 4K UHD to date, it is clear that there is a sizable appetite for premium high-definition products, and that format plays a meaningful role in boosting retail traffic,” says Eddie Cunningham, president of Universal Pictures Home Entertainment.

Retail partnerships are key, Cunningham adds. “Given that physical and digital transactional consumption rates are remaining steady year over year and that disc purchases are making up more than half of that consumption, there’s no question that movie buyers continue to be vitally important to retail,” he says. “At no other time in our industry has it been more critical to ensure that we work together to retain the loyalty of movie consumers, creating urgency for our products and delivering the utmost value, quality, accessibility and convenience possible.”