With most states across the U.S. implementing stay-at-home orders as concerns about the novel coronavirus pandemic swept across the country, new data from Nielsen found streaming video consumption skyrocketing.

Specifically, the consumption of non-linear content via internet-connected devices, such as smart TVs and other multimedia devices, rose week after week in March, hitting its peak the week of March 23.

Previous research found that staying put in homes can lead to almost a 60% increase in the amount of video content consumed. But a pandemic changes everything. States and cities that moved quickly to enact stay-at-home orders in mid-March, such as New York, Illinois, Washington and California, saw some of the most dramatic increases in streaming consumption between March 2-23.

Across Nielsen’s 56 largest metered markets, streaming increases have been persistent across all hours of the day. However, the most significant gains have been in the early afternoon hours. Historically, few adults would be home during these hours, but with the lifestyle changes created by stay-at-home orders, the ratings company saw more than 50% increases in streaming from 1-4 p.m. These hours are up over 100% from the same week a year ago. 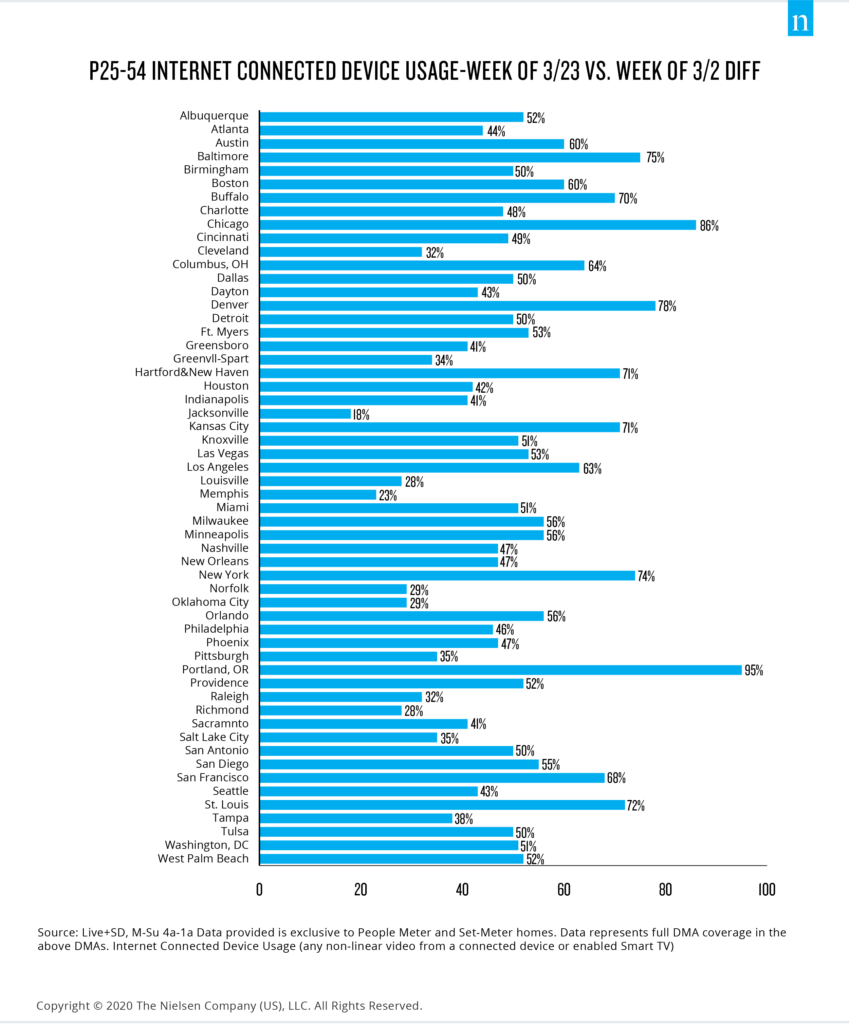 Nielsen also saw streaming of non-linear content increase across all age groups in Nielsen’s 56 largest metered markets during March. With most schools closed across the country, younger demographics experienced the largest growth, with more than 60% increases.

Even before COVID-19, organic streaming had been growing over the past few months as new subscription video on demand services such as Disney+ hit the marketplace, along with several ad-supported services.

“The current outbreak has further accelerated streaming’s growth among the key advertising demographic as consumers find themselves with more time in front of the TV glass,” Nielsen wrote, citing consumer searches for new video entertainment content categories such as fitness and wellness, gaming live streams and cooking.

“By understanding where, when and who is watching content across streaming platforms, the media industry as a whole will be better positioned to connect with viewers,” Nielsen wrote.