Steve Carell in "The Office"

Eight of the top 10 movies were kids’ titles, and “The Office” was by far the top TV show in minutes watched in 2020, according to Nielsen data presented during the virtual CES.

Meanwhile, Netflix’s “Ozark” topped streaming originals in minutes viewed. In fact, Netflix originals took nine of the top 10 on the minutes-watched originals chart, with Disney+’s “The Mandalorian” coming in at No. 5.

Americans streamed the equivalent of more than 100,000 years of “The Office,” said Brian Fuhrer, SVP, product strategy and thought leadership, Nielsen — with one episode, season four’s “Dundar Mifflin Infinity,” the most streamed episode at almost 31 years. 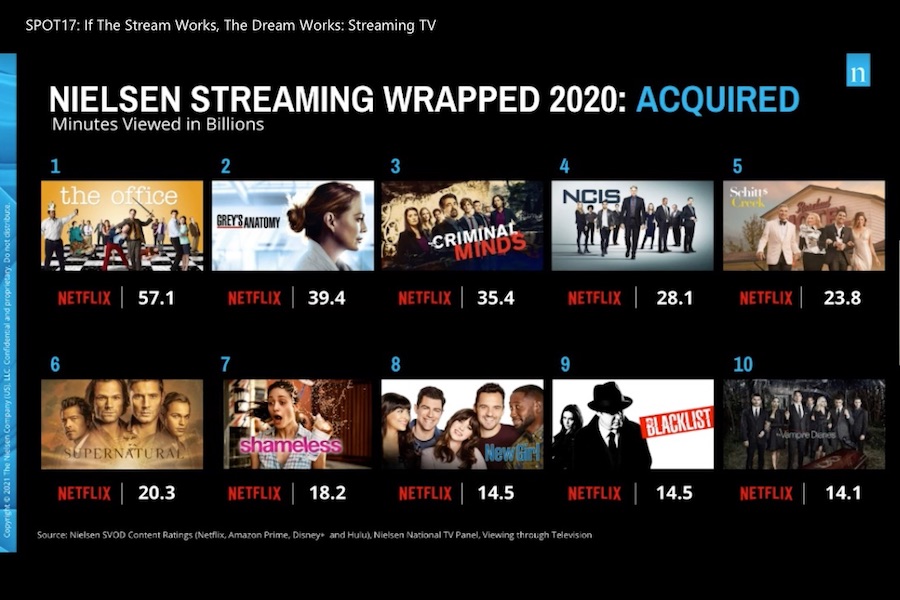 While Netflix got the benefit of devoted “Office” fans in 2020, Peacock this year acquired the rights to the NBC show.

“We don’t think ‘The Office’ is used up,” said Fuhrer, who noted fans watch the show almost as a comfort.

“The kids’ movies have the tremendous advantage of repeat viewings,” he said, as children will watch a film over and over.

The top movie in terms of minutes watched was Frozen II, followed by, in order, Moana, Pets 2, Onward and Dr. Seuss’ The Grinch. Among non-kids’ titles, only Disney+’s streamed Broadway show Hamilton and Netflix’s Spenser Confidential cracked the top 10. 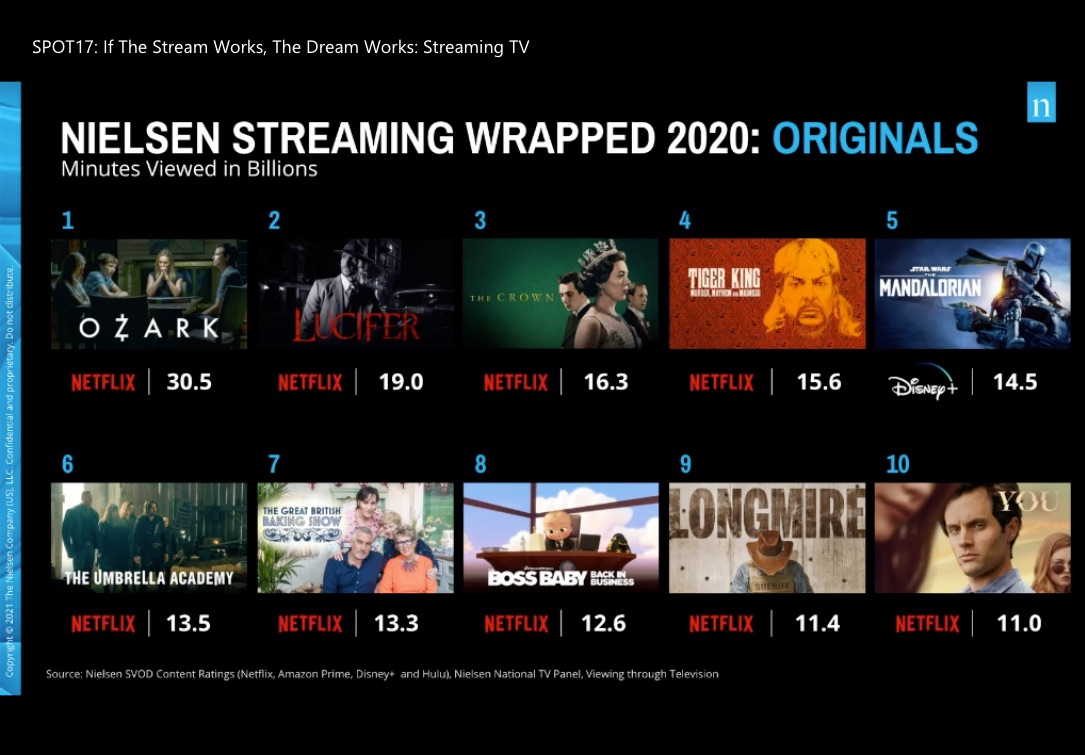 Among originals, following “Ozark,”  the top most watched programs in terms of minutes were three other Netflix shows, in order, “Lucifer,” “The Crown” and the infamous “Tiger King.” Coming in at No. 5 was Disney+’s “The Mandalorian.”

Fuhrer said the idea of stretching out episodes of a series to create “water cooler TV,” as Disney+ did with “The Mandalorian,” is a growing trend.

“I think we’re going to see more and more of that,” he said, adding “Amazon did it with ‘The Boys’ to great success.”

While everyone streamed more during the pandemic, one of the biggest changes is how it attracted older viewers, who adopted it and kept on streaming.

“As the older demographic started to stream, there was a lot of sampling,” especially of AVOD services as they were free, he noted.

As theaters closed, first-run movies hit streaming, a trend that is here to say, he said.

“One of the things I find most fascinating was the opportunity to deliver first run movies to consumers,” he said.

While cinemas aren’t going to go away, first-run streaming will become a “bigger and bigger piece of the television pie over time,” he said.

Another trend is an explosion in streaming outlets.

“Fragmentation is hitting streaming just like it hit traditional TV,” he noted.

For these services, “distribution is critical,” he said.

“If it’s not available on the device you have, it’s invisible,” he noted.

Value is another battleground in the streaming marketplace, with consumers evaluating the price versus the quality of content.