In U.S. households with over-the-top video, about 20% of residents are streaming content on a daily basis, according to new data from Nielsen.

The report, citing an online survey, found that 60% of Americans subscribe to more than one paid video streaming service. That’s important considering the influx of new OTT video services entering the market. Nielsen also found that 93% of U.S. consumers said they would either increase or keep their existing streaming services.

According to survey respondents, price is the most vital attribute for a streaming service. This puts the impetus on platforms to satisfy customers’ return on investment, while being affordable enough for the rest of their media habits.

In fact, when asked about what made them cancel a paid video subscription service, 42% of respondents said they didn’t use it enough to justify the cost.

“The proliferation of on-demand streaming services is the most profound media disruption of the last half-century,” Peter Katsingris, SVP of Audience Insights, said in a statement. “And this disruption is driving profound, real, actionable opportunity across all facets of the industry.”

Netflix accounted for 31% of household streaming, followed by 21% for YouTube, 12% for Hulu and 8% for Amazon. Another 28% was spent viewing other streaming services. 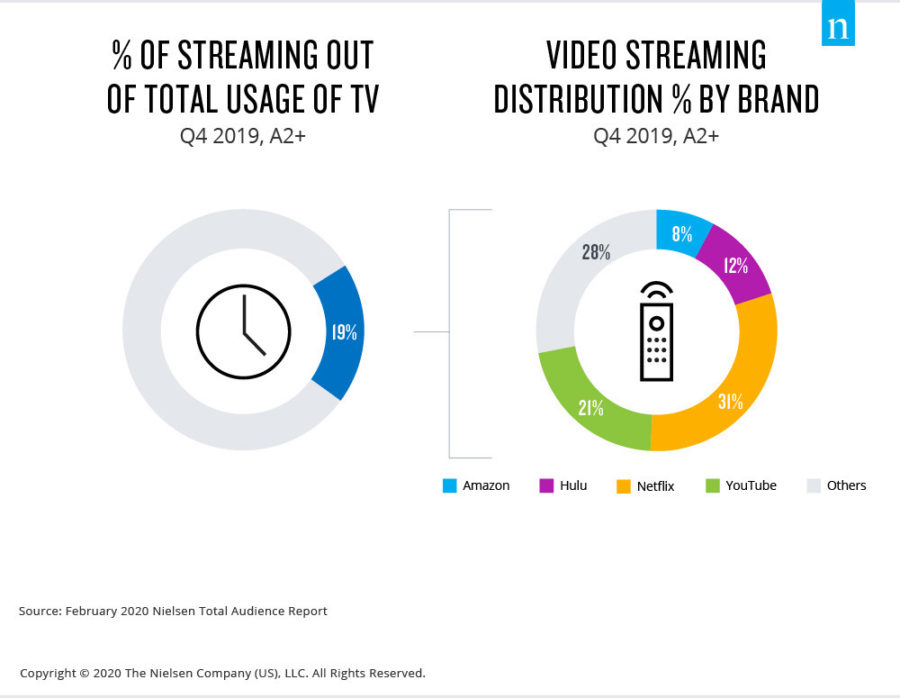 While there are myriad attributes that make a streaming service attractive to users, content, including original and proprietary, is what ultimately gets them to sign-up, according to Nielsen.

Among the top four reasons why survey participants decided to subscribe to additional streaming services were all content-based, with the top reason being to expand the content that they had available.

About 20% of respondents said they canceled a service after watching all the content that they were interested in.

“We’ve only just entered the first chapter of the ‘streaming wars,’ but rest assured that the fight will continue,” Nielsen said. “The platforms that can adapt to the marketplace may rise to the top; should they not continue to evolve nor expand their content libraries, then consumers just might replace them.”