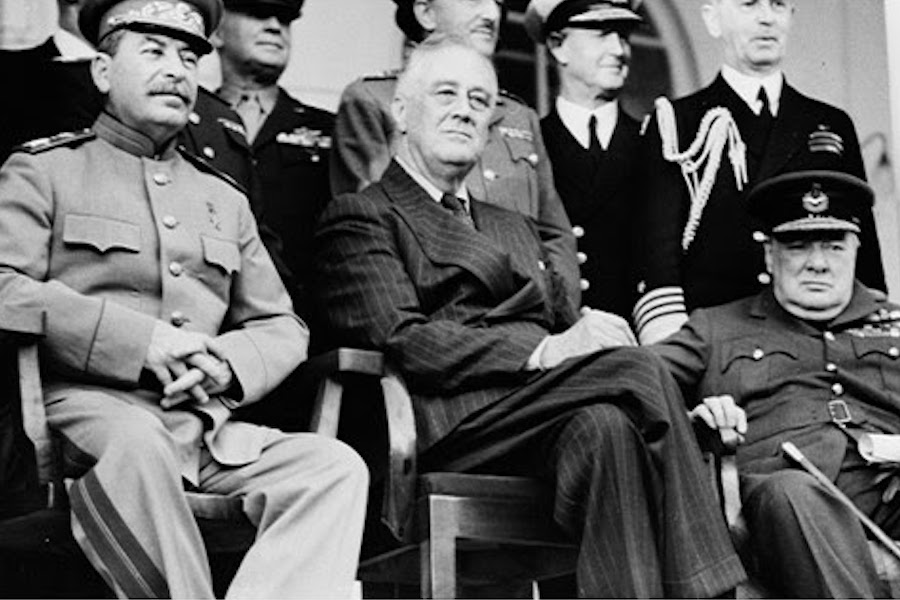 Titans of the 20th Century

Season five of “Grantchester,” the documentary Titans of the 20th Century and American Experience: George W. Bush are among the titles coming to disc and digital in July from PBS Distribution.

In season five of “Grantchester,” available on digital and DVD July 21, it’s 1957, and Will Davenport (Tom Brittney) has settled into his role as the vicar of Grantchester, preaching to a packed church. His best friend, Detective Inspector Georgie Keating (Robson Green), has come to accept (just about) his wife Cathy’s commitment to her job. Mrs. C. happily juggles her roles as the vicarage housekeeper and being a well-to-do married woman, and after a trip to Marrakech, even Leonard has managed to carve out some happiness with Daniel. But Will’s faith will be thoroughly tested as he and Geordie are reminded once more that there’s darkness lurking in their little corner of Cambridgeshire. In addition to Brittney and Green, returning members of the acclaimed ensemble include Tessa Peake-Jones, Kacey Ainsworth and Al Weaver.

Also coming to DVD and digital July 21 is American Experience: George W. Bush, a look at the life and governance of the 43rd president of the United States. The program starts with Bush’s unorthodox road to the presidency through the contested election of 2000, when a Supreme Court ruling resulted in his becoming the president. Then, the film chronicles the tumultuous events, domestically and internationally, that dominated Bush’s eight years in office — the terrorist attacks of Sept. 11, 2001, the subsequent war in Iraq, the search for weapons of mass destruction, Hurricane Katrina, and the most serious financial crisis since the Great Depression.

Another “American Experience” title is coming to DVD and digital July 21, Mr. Tornado. The Super Outbreak of 1974 was the most intense tornado outbreak on record, tearing a vicious path of destruction across 13 states, generating 148 tornadoes from Alabama to Ontario, damaging thousands of homes, and killing more than 300 people. Meteorologist Tetsuya Theodore “Ted” Fujita spent 10 months studying the tornado outbreak’s aftermath in the most extensive aerial tornado study ever conducted, and through detailed mapping and leaps of scientific imagination, made a series of meteorological breakthroughs. His discovery of “microbursts,” sudden high wind patterns that could cause airplanes to drop from the sky without warning, transformed aviation safety and saved untold numbers of lives.

The documentary The Greatest Bond is coming to DVD and digital July 14. Centered around the Patriot Paws service dog organization based in Dallas, the program follows a group of disabled U.S. veterans who are about to be given a service dog and shows their transformation as the dogs expand the veterans’ world and start to heal them.

Also due on digital and DVD July 14 is Titans of the 20th Century, a biography of some of the most significant politicians of the time, Franklin D. Roosevelt, Winston Churchill, Adolf Hitler and Josef Stalin, men who caused and men who cured the worlds most troubled times, from the last shot fired in the First World War to the victory of Mao Zedong. This program is a story of the power to lead and mislead, to inspire and to cause mass destruction. These were men who came from different parts of the world, espoused radically different political doctrines and that seem to have had no common characteristics except an ambition to lead, a taste for power and a belief that they had been chosen by destiny.

American Experience: The Man Who Tried to Feed the World debuts on DVD and digital July 28. In 1966, drought and an exploding population confronted India with the imminent threat of a severe famine that many scientists and intellectuals feared was a harbinger of global catastrophes to come. As the world’s population outstripped its ability to produce food, India turned to Norman Borlaug, an unassuming plant breeder from Iowa whose combination of scientific knowledge and raw determination had made him a legend among a small handful of fellow specialists. The Man Who Tried to Feed the World recounts and explores the story of the man who would not only solve India’s famine problem, but also would go on to lead a “Green Revolution” of worldwide agricultural programs estimated to have saved 1 billion lives. He was awarded the 1970 Nobel Peace Prize for his work, but spent the rest of his life watching his methods and achievements come under increasing fire.

Season one of “Somewhere South” comes out on DVD and digital July 28. Celebrity chef, author, restaurateur and award-winning host for the PBS series “A Chef’s Life” Vivian Howard hosts a culinary journey that explores the cultural twists on classic dishes and new traditions that are being formed in the American South. Howard examines some of the popular dishes that unite us all — dumplings, hand pies, porridge and many others — and speaks on how these dishes change from culture to culture. In North Carolina, she tries the collard sandwich, a staple of Lumbee Indian cuisine in the Carolinas. Then she goes to West Virginia to eat pepperoni rolls, a dish inspired by coal miners. Howard travels to Charleston, where rice is king, and enjoys grits along with other rice dishes that are among the favorites of South Carolina’s bustling food scene.

Finally, Viral: Antisemitism in Four Mutations comes out on DVD and digital July 28. Antisemitism in the United States and Europe is rising and worsening in ways not seen since the 1930s. It comes in the forms of vandalism, social media abuse, assault and murder. Emmy-winning filmmaker Andrew Goldberg and producer Diana Robinson explore its infectious behavior by traveling through four countries to speak firsthand with victims, witnesses and antisemites, interviewing subjects including Bill Clinton, Tony Blair, Fareed Zakaria, George Will, Deborah Lipstadt and others. With opening narration by Julianna Margulies, the film examines the far right in the United States and how it has incited such acts as the mass shooting at the Tree of Life Synagogue in Pittsburgh. Then moving to the far left in England, the documentary explores the traditionally anti-racist Labour party conflating Israel and Jews, causing tremendous harm to the Jewish community. In France, the program delves into the seemingly endless wave of violence against Jews by Islamists and radicals.