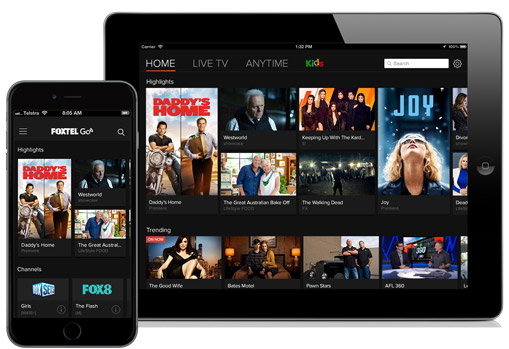 Netflix has partnered with Australian pay-TV operator Foxtel to help grow subscribers in an over-the-top video market it already dominates.

New research from Roy Morgan shows 13.36 million Australians now have access to either Netflix or Foxtel via a household subscription — which represents 64.4% of all Australians over the age of 14.

Netflix, which launched service in Australia and New Zealand in 2015, is targeting the 2 million Foxtel subs who aren’t already members.

The service, which earlier this month posted its first quarterly U.S. subscriber loss in eight years, generated little more than 50% of its projected international subs.

“Foxtel and Netflix are undoubtedly the two giants of Australian pay-TV and the plan for Foxtel to provide Netflix through the Foxtel IQ box set … carries significant opportunities for both services,” Roy Morgan CEO Michele Levine said in a statement. 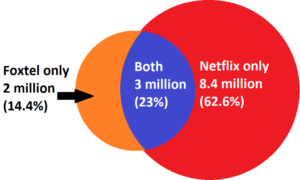 The move also appears preemptive by Foxtel and mirrors Comcast Cable’s recent decision to offer direct access to Netflix after years of ignoring the service.

“[It’s] a solid defensive measure to help prevent existing Foxtel subscribers ditching the service to move to cheaper [OTT video] alternatives and provides an extra incentive for new users to sign up for Foxtel,” Levine said.

“The proliferation of cheap streaming video services led by Netflix in recent years has provided the biggest challenge yet to Foxtel’s traditional pay-TV business model and there are more cashed up competitors on the way.”

“The more Foxtel can be regarded as the ‘gateway’ to video content from the likes of Netflix, and perhaps other rival services in future, the more access Foxtel will gain to detailed user data metrics that will help them tailor their services, and advertising, to individual viewing preferences and the more valuable their service will in turn be to advertisers looking for an audience,” Levine said.

“For Netflix, the ability to link up with Foxtel’s News and Sport services and be a frictionless option for the Foxtel viewers who don’t currently access Netflix, is an opportunity for growth in a market which may be reaching maturity.”