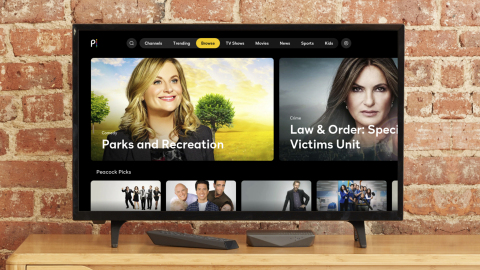 The Peacock app will be available with the nationwide, which could be moved up from its previously announced July 15 date, Matt Strauss, chairman of Peacock (and former Media Play News “Digital Driver”) April 14 told a media conference call.

Peacock Premium will be available for free to Comcast pay-TV subscribers; $4.99 monthly with ads to non-subs; and $7.99 with out commercials.

Strauss said NBCUniversal is “evaluating” moving up the launch date with millions of Americans quarantined in their homes due to the coronavirus pandemic.

The SVOD/AVOD platform was expected to play a major role in NBC’s 2020 Tokyo Summer Olympics coverage — plans that were turned upside down when the quadrennial event was pushed by to 2021.

“We feel even more strongly we need to bring Peacock as quickly to market as possible,” Strauss said.

The longtime Comcast executive said Peacock originals, including “Brave New World,” an update of “Saved By the Bell,” with original cast members Elizabeth Berkley and Mario Lopez, among others, would be available on the platform later this year or in 2021.

Peacock Premium showcases 15,000 hours of content, in addition to early access (by 3 1/2 hours) to “The Tonight Show With Jimmy Fallon” and “Late Night With Seth Meyers.”