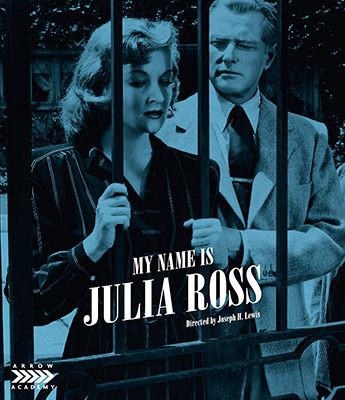 Somewhere around the time we spot George Macready cutting up women’s clothing with scissors as his elderly mother looks on, the thought is cemented for good that My Name Is Julia Ross isn’t your standard garden-variety ‘B’ from 1940s Columbia Pictures. And it wasn’t. Released around Thanksgiving 1945 just a couple months after World War II’s conclusion, JR has been regarded as its year’s dominant big-screen sleeper for so many decades that I first began reading about it as an 11-year-old in the ’50s.

Released just a year earlier, MGM’s Gaslight had won an Oscar for Ingrid Bergman, long before its title entered the modern-day lexicon as a verb for trying to convince people that things aren’t as they appear. Unlike poor ball-of-confusion Bergman in Gaslight’s earlier going, the abducted Julia character that Nina Foch plays isn’t having any of it because she knows that she’s in the hands of charlatans. She just doesn’t know why.

Aside from those occasional plot holes without which speedily efficient ‘B’-pics likely couldn’t have existed, the feminist blueprint here (screenplay by Muriel Roy Bolton from a novel by male pseudonym Anthony Gilbert) gave director Joseph H. Lewis fairly sturdy material with which to fine-tune some stylish touches. In fact, the very first fog-filled shot aptly establishes Foch/Julia’s isolation in London: no parents, no gal-pals and no boyfriend after a thought-to-be-contender ends up choosing another woman. And in terms of work, she also has no prospects, and the landlady would really like to get her back rent.

Suddenly, there emerges a miracle newspaper posting from a job agency unknown to her (and, as it turns out, no one else). An elderly type (Dame May Whitty) needs a live-in secretary, and lonely Julia strikes her as perfection, presumably setting the table for a mutually beneficial union. What’s more, actress Whitty momentarily conjures up warm audience feelings, given all that (then and still) screen currency she built up from her sympathetic performances in Hitchcock’s ever-popular The Lady Vanishes and the lesser-seen but still remarkable Night Must Fall (original version). Then, a little later, Whitty’s son turns around from a window gaze to reveal that’s he’s George Macready — an actor who was just a year away from his unforgettably creepy turn opposite Rita Hayworth and Glenn Ford in Gilda and one who was once described by the late film historian Doug McClellan as “Columbia’s all-purpose degenerate of the ’40s.” (Now, that’s turning a phrase.)

No good can come of this, and before we can blink, the agency has flown the coop while mom-son-maid and their small band have fled their London digs for a Cornwall near-mansion where Julia wakes up in bed as waves crash below on rocks below. The joint wouldn’t be a bad R&R spot under different circumstances, but in this case the confused abductee is in a bad dream that keeps getting worse. Not helping is the fact that the initials “M.G.” are everywhere (monograms included), while everyone is telling Julia that her name is really Marian Hughes and that she’s the mentally shaky wife of Macready.

He’s no prize, to be sure, and Julia hasn’t even seen him scissoring the clothing — that act certainly a window into his odd personality, along with a fiery temper that tends to manifest itself in women’s bruises. The rest is mostly cat-and-mouse dealing with the prisoner’s attempts to escape, resulting in a highly competent co-feature of the day whose onetime potency has diminished somewhat over the years due to screen subsequent variations (William Wyler’s knockout take on John Fowles’ The Collector, this is not). Helping things out a lot is cinematographer Burnett Guffey, who like all those workhorse old-timers seemed to shoot about 17 pictures a year, though they obviously didn’t. I’m always impressed by camera whizzes who pulled off Oscar wins in both black-and-white and color, as well as in different screen eras. Guffey did both (From Here to Eternity and Bonnie and Clyde), and in Julia Ross, I never once think I’m anywhere on Columbia Pictures’ backlot.

Director Lewis gets a lot of credit for this, as well he should. This was his breakout picture, along with 1946’s So Dark the Night, which Arrow has just released on Blu-ray as well. (And I’d better take an immediate look at this because the packed bonus section features Glenn Kenny, Farran Smith Nehme and Imogen Sara Smith — or “all the stars in heaven,” as they used to say at MGM). Not that anyone’s slumming here: In addition to a detailed print intro by critic Adrian Martin as part of Arrow’s always slick-in-the-good-sense packaging, this Julia Ross release features recent Michael Curtiz biographer Alan K. Rode for its own bragging rights, and he’s as amused at Macready slicing up women’s clothing as I am.

In keeping with his commentary on the recent Blu-ray of the Raymond Chandler-scripted The Blue Dahlia, Rode is adept at sleuthing old studio records to reject inaccurate claims that have been made about the movie — as with Lewis’s assertion that his picture’s enthusiastic reception led Columbia Pictures to move it to the top of double bills, which never happened. For all of Lewis’s skill with scant budgets (he later did Gun Crazy and The Big Combo), he was apparently one who inflated certain accomplishments, as many do in later years if they’re not careful. On the other hand, Lewis’s swan song Terror in a Texas Town (secretly scripted by still blacklisted Dalton Trumbo) should by itself put him on some map. It’s presumably the only Western whose climactic dusty-street gunfight pits a gunman against Sterling Hayden heaving a whaling harpoon.

Also featured is Nora Fiore (aka The Nitrate Diva), whose feminist-oriented critical take is the kind you can bet the film didn’t get at the time (though with a late ’45 release date, the picture hit just as many reluctant women were being forced back into domesticity from the wartime factory work they had enjoyed). I suppose it’s a thought-provoker linking these two events, though one has to wonder if Columbia chief Harry Cohn had these kind of lofty ambitions on his mind for a second feature whose shelf life he couldn’t envision. For Cohn, male feminism probably amounted to chasing one less starlet around his desk.