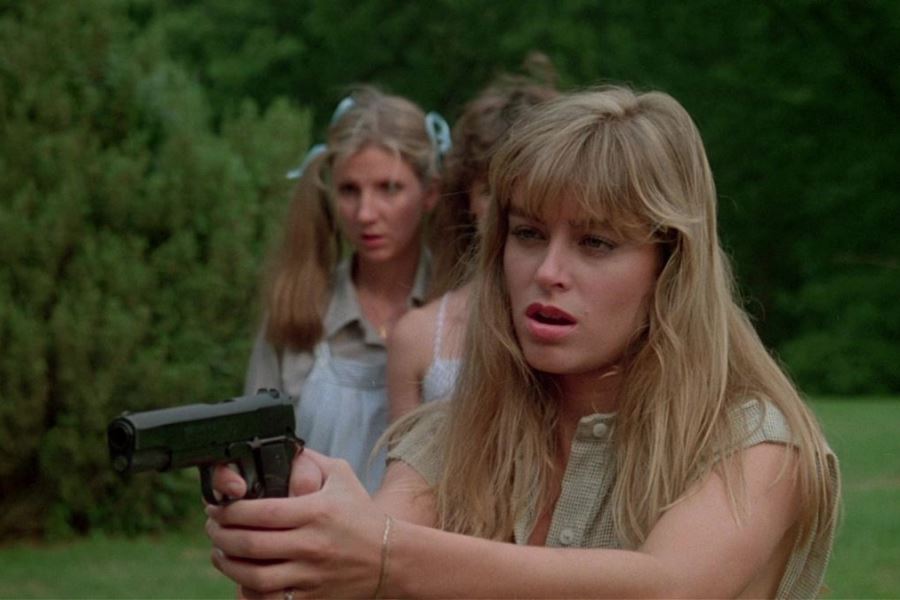 The House on Sorority Row

MVD Entertainment Group has added five classic films on Blu-ray and DVD to its MVD Rewind Collection, which celebrates video store culture. They include Action U.S.A. (1989), Drive (1997), Mortuary (1983), The House on Sorority Row (1982) and The Go-Go Boys: The Inside Story of Cannon Films (2014), each loaded with extras.

“I’m excited to be working with our great content partners to bring both Drive and The Go-Go Boys to Blu-ray for the first time, and to give collectors a second chance to pick up Action U.S.A., Mortuary and The House on Sorority Row on disc once again,” Eric D. Wilkinson, MVD director of acquisitions and producer of the MVD Rewind Collection, said in a statement. “I’m a geek for video store culture and our packaging reflects that. It gives fans that lived through the video store era an opportunity to enjoy the nostalgia, and for our younger collectors, they get to experience these for the very first time, just as they were.”

Due May 11 is Action U.S.A. In the 1989 film, after her boyfriend is murdered by the gangsters whose diamonds he stole, a girl is protected by two FBI agents who plan to keep her from sharing the same fate. It stars Gregory Scott Cummins (“It’s Always Sunny in Philadelphia,” Cliffhanger), Ross Hagen (Armed Response), Cameron Mitchell (How to Marry a Millionaire) and Barri Murphy (Armed for Action). Originally released on VHS by Imperial Entertainment, MVD Rewind Collection brings this cult classic action film to disc in conjunction with Verdugo Entertainment. Blu-ray bonus material include audio commentary with director John Stewart, star Cummins and cinematographer Thomas Callaway moderated by filmmaker Steve Latshaw; an interview with Stewart; a behind-the-scenes stunt featurette; the theatrical trailer; a mini-poster; reversible artwork; and, for the first pressing only, a limited edition retro slipcover that celebrates the rental packaging of legendary video store chain Erol’s Video (1980-1990).

Also due May 11 is Drive, which follows a prototype enhanced human from Hong Kong who enlists help from a hostage and a free-spirited woman to evade killers-for-hire in a race against time in order to get from San Francisco to Los Angeles. Originally released in 1997 from A-Pix Entertainment, Drive makes its debut on Blu-ray with a brand new 4K HD scan of the original camera negative of the extended director’s cut of the movie. The cast includes Mark Dacascos (John Wick 3: Parabellum), Kadeem Hardison (White Men Can’t Jump), Brittany Murphy (Clueless), Sanaa Lathan (Alien vs Predator), Tracey Walter (Repo Man) and Ron Yuan (Mulan). Special features on Blu-ray include audio commentary by director Steve Wang, fight choreographer Koichi Sakamoto, and stars Dacascos and Hardison; the “Drive: The Force Behind the Storm” documentary; six deleted scenes; an interview gallery with cast, director and crew, including stars Dacascos and Hardison, Wang, second unit director Wyatt Weed and stunt coordinator Koichi Sakamoto; two versions of the film, the director’s cut and the original theatrical version; the original theatrical trailer; reversible artwork; a mini-poster; and, for the first pressing only, a limited edition retro slipcover. The Drive: Director’s Cut will also be released on a standard edition DVD.

Coming July 6 is Mortuary. In the film, convinced that her father’s death was not accidental, Christie Parson decides to investigate to find out the truth. Her sleuthing draws her to a local mortuary, where deadly secrets are revealed. Originally released on VHS from Vestron Video in 1984, the film’s cast includes Lynda Day George (TV’s “Mission Impossible”) in her final film role, Christopher George (Pieces), Bill Paxton (Aliens), Mary McDonough (“The Waltons”) and David Wallace (Humongous). The special edition Blu-ray features bonus material courtesy of Scorpion Releasing and includes an interview with composer John Cacavas; the original theatrical trailer; a mini-poster; and, for the first pressing only, a limited edition retro slipcover.

Also due July 6 is The House on Sorority Row. In the film, after a seemingly innocent prank goes horribly wrong, a group of sorority sisters are stalked and murdered one by one in their sorority house while throwing a party to celebrate their graduation. Originally released on VHS from Vestron Video in 1983, The House on Sorority Row stars Kathryn McNeil (Sudden Death), Eileen Davidson (“Days of Our Lives”), Harley Jane Kozak (Arachnophobia) and Jean Schertler (Runaway Bride). The special edition Blu-ray features bonus material courtesy of Scorpion Releasing and includes audio commentary with director Mark Rosman; audio commentary with director Rosman and stars Davidson and McNeil; interviews with cast and crew, including Rosman, Kozak, Davidson, McNeil, composer Richard Band and producer Igo Kantor; the original pre-credit sequence; alternate ending storyboards; TV spots; the theatrical trailer; reversible artwork; a mini-poster; and, for the first pressing only, a limited edition retro slipcover.

Available July 20 is The Go-Go Boys: The Inside Story of Cannon Films. This definitive documentary about Cannon films follows Menahem Golan and Yoram Globus, two Israeli-born cousins who, in pursuit of the American Dream, turned the Hollywood power structure upside down, producing more than 300 films and becoming the most powerful independent film company in the world. Directed by Sundance Grand Jury Prize nominee Hilla Medalia (After the Storm), The Go-Go Boys is an up close and personal documentary that examines the complex relationship between two contradictory personalities whose combined force fueled their success and eventual collapse. It features interviews with Jean-Claude Van Damme, Michael Dudikoff, Eli Roth, Boaz Davidson and more, along with Golan and Globus themselves, as well as archive footage of Sylvester Stallone, Charles Bronson and Chuck Norris. Blu-ray special features include the original theatrical trailer; reversible artwork; a mini-poster; and, for the first pressing only, a limited edition retro slipcover.