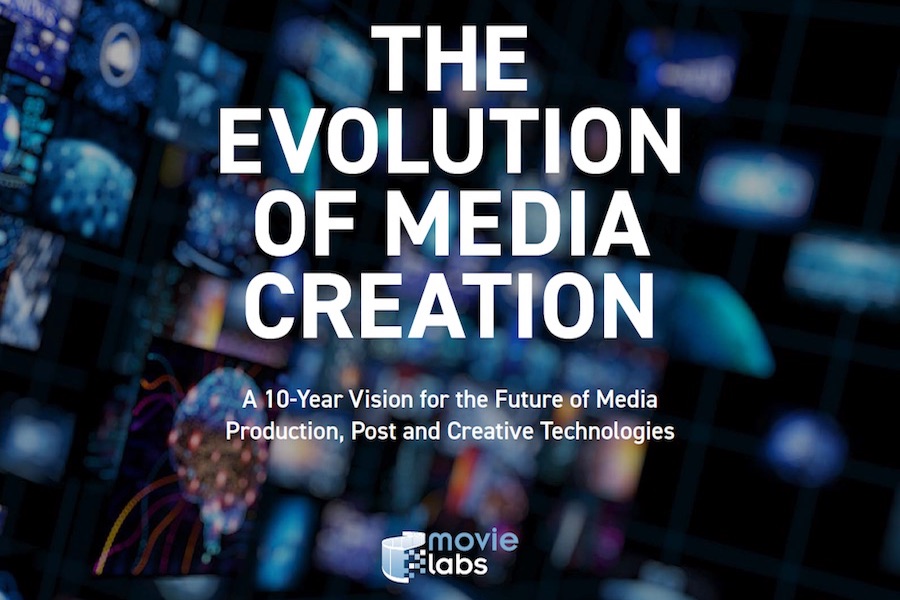 Motion Pictures Laboratories (MovieLabs), together with member studios, has published a white paper presenting an industry vision for the future of media creation technology by 2030.

The paper, jointly authored by MovieLabs and technology leadership teams from Hollywood studios, paints a picture of future technology and discusses the need for the industry to work together now on new software, hardware and production workflows to support and enable new ways to create content over the next 10 years. The white paper is available for free download on the MovieLabs website.

The 2030 Vision paper lays out key principles to form the foundation of this technological future, with examples and a discussion of the broader implications of each. The principles envision a future in which:

The paper predicts that many mundane or repetitive production tasks will be accomplished through artificial intelligence-enhanced tools, automation, bots and processes.

The publication of the paper will be supported with a panel discussion at the IBC Conference in Amsterdam. The panel, “Hollywood’s Vision for the Future of Production in 2030,” will include senior technology leaders from five major Hollywood motion picture studios and will take place Sept. 15 at 2:15 p.m. at the IBC Conference in the Forum room of the RAI Amsterdam Conference Centre. More details can be found here.

“While the next 10 years will bring significant opportunities, there are still major challenges and inherent inefficiencies in our production workflows that threaten to limit our future ability to innovate,” said Richard Berger, CEO of MovieLabs, in a statement. “We have been working closely with studio technology leaders and strategizing how to integrate new technologies that empower filmmakers to create ever more compelling content with more speed and efficiency. By laying out these principles publicly, we hope to catalyze an industry dialog and fuel innovation, encouraging companies and organizations to help us deliver on these ideas.”

“The MovieLabs 2030 Vision Paper is the culmination of the technological opportunities emerging today that the major stakeholders in entertainment — particularly movie studios — are committed to making available for mainstream productions over the next decade,” said Anthony Guarino, EVP, worldwide technical operations, Paramount Pictures, in a statement. “Ideally, the white paper becomes a catalyst for all participants in our industry to confidently make the technology development investments needed to underpin the next-generation workflows and guiding principles. Paramount Pictures looks forward to working with production service partners to encourage development efforts that will bring forward solutions that support this vision.”

“Sony Pictures Entertainment has a deep appreciation for the role that current and future technologies play in content creation,” said Don Eklund, CTO, Sony Pictures, in a statement. “As a subsidiary of a technology focused company, we benefit from the power of Sony R&D and Sony’s product groups. The MovieLabs 2030 document represents the contribution of multiple studios to forecast and embrace the impact that cloud, ML, and a range of hardware and software will have on our industry. We consider this a living document that will evolve over time and provide appreciated insight.”

“With film production experiencing unprecedented growth, and new innovative forms of storytelling capturing our audiences’ attention, we’re proud to be collaborating across the industry to envision new technological paradigms for our filmmakers so we can efficiently deliver worldwide audiences compelling entertainment,” said Michael Wise, SVP  and CTO, Universal Pictures, in a statement.

“Disney looks forward to working with the industry to strategically integrate technology developments into the production process over the next 10 years,” said Shadi Almassizadeh, VP, motion picture architecture and engineering, Walt Disney Studios, in a statement.

“In today’s entertainment landscape, creativity and technological innovation are inextricably linked,” said Vicky Colf, CTO, Warner Bros. Entertainment, in a statement. “The MovieLabs 2030 vision does the important work of focusing on technology tools and processes which enable content creator artistry and ingenuity, while delivering efficiency, agility, and security to the ever evolving production environment.”