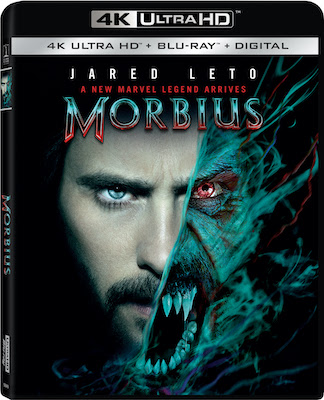 For its latest attempt at an expanded “Spider-Man” cinematic universe that doesn’t seem to have Spider-Man in it, Sony has once again turned to a character that seems more akin to a horror movie villain than the protagonist of a superhero movie. But just because Venom manages to attract an audience doesn’t mean the formula can be applied to just any of Spidey’s historical comic book baddies who became antiheroes after catching on with audiences. And so we are presented with the tale of Morbius the Living Vampire.

The thing about comic books is, that while sometimes a character becomes iconic, more often than not they are pretty goofy, rising to a level barely above cult status if not altogether forgotten. Back in the day, when publishers needed stories to tell about the popular ones, any number of bizarre concepts were introduced into the monthly books, just to see which ones might stick.

Morbius was introduced into “Spider-Man” comics back in the early 1970s as essentially a costumed villain version of Dracula for Spidey to fight.

Interspersing strange characters and fantastical adventures with more-serious fare could hardly be considered unusual for the comic book page. At one point, Marvel Comics actually made Dracula and Godzilla part of its canon when it had the rights to them. Heck, Spider-Man even crossed paths with The Transformers at one point.

The point being, it’s easy enough for a comic book to get away with these things. Translating them credibly into live-action is quite another feat.

Morbius tells the story of Dr. Michael Morbius (Jared Leto), a brilliant scientist with a crippling, unspecified blood disorder. He creates a serum for his affliction by splicing genetic material from bats into human DNA, temporarily curing his condition but giving him an insatiable thirst for human blood, without which his sickness returns. Morbius quells this thirst with a form of artificial blood he created.

In becoming a pseudo vampire, he gains the abilities of echo-location, superspeed and flight.

This basic premise could be the setup to any number of low-budget direct-to-video horror movies. But in those, the mad scientist would transform into the killer, only to be opposed by a love interest or fellow scientist, or maybe even a superhero, in some parable against technology run amok.

This being a Spider-Man movie without Spider-Man, and being called Morbius, the story has to find some way to make Morbius the hero. So, we get the benefactor of his research, a childhood pal named Milo (Matt Smith) with the same disease. He also cures himself with the serum, but gives into his bloodlust, killing innocents to maintain his power. This brings him into conflict with Morbius, who vows to stop him. And yet another comic book movie in which the bad guy is a mirror to the good guy.

There’s no message here, just an attempt to get more characters from the page to the screen in the hopes of future movies. Hence a pair of end-credits sequences that feel tacked on and, ultimately, pointless, given how poorly the film fared at the box office.

In addition, the attempt to ground Morbius’ powers in science rather than the supernatural just raises more questions that would just be answered by the nature of comic books themselves on the page, but are rather glaring in live-action outside the context of the source material. The serum granting bat-like powers is one thing, but why do the characters look like they are dissolving when they move fast? Last I checked, real bats couldn’t teleport. It does make for some funny gags about vampire lore, however.

Ultimately, Morbius is a creature of two genres, catering unsatisfactorily to both of them — too grim for comic book fare, and too beholden to the superhero formula for a vampire story.

The Blu-ray includes a handful of extras, mostly behind-the-scenes featurettes totaling about 25 minutes. These are pretty typical or this kind of movie, mostly involving the filmmakers discussing the stunts and visual effects. There’s also a two-and-a-half-minute blooper reel, a two-and-a-half-minute look at comic book references in the film, and six minutes of promotional materials, including a three-minute recap of the press tour and a funny 36-second spoof of detergent ads.