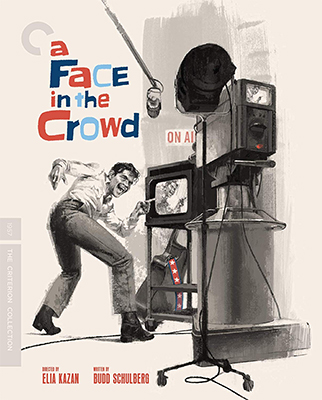 A Face in the Crowd

Criterion, Drama, $29.95 DVD, $39.95 Blu-ray, NR.
Stars Andy Griffith, Patricia Neal, Walter Matthau, Anthony Franciosa, Lee Remick.
1957. Elia Kazan’s warning shot about how broadcast mass media might be able to “package” political candidates the way Madison Avenue had done for antacid TV spots may be one of the most prescient of all American movies, and was Andy Griffith’s screen debut.
Extras: The Criterion bonus extras are illuminating, as they especially need to be on a movie like this. Interviewed historian Ron Briley strengthens the undeniable case that Kazan’s work got better and more committed after he named communists to HUAC, while an excellent 2005 featurette doc is carried over from the old Warner DVD release, which this 4K transfer puts very much in the shade. In addition to critic April Wolfe’s beauty of an essay, there’s a lengthy excerpt from Kazan’s introduction to the published Crowd screenplay from 1957, as well as the same year’s New York Times profile on Griffith.
Read the Full Review