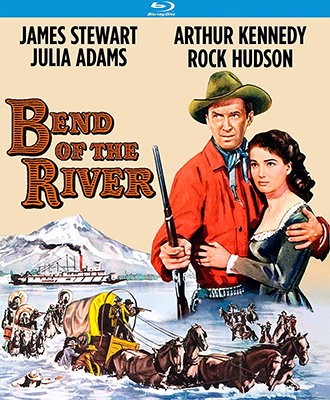 Bend of the River

Kino Lorber, Western, $29.95 Blu-ray, NR.
Stars James Stewart, Arthur Kennedy, Julia Adams, Rock Hudson.
1952. This second of the five revered James Stewart-Anthony Mann Westerns, Bend of the River has the “elements”: two great lead actors playing characters who are alternately friendly and adversarial with each other; a supporting cast of young screen players who were getting early career breaks on the way to expanding their fan bases; older character actors (sub-category: Western) who are not anyone’s pretty faces; and excellent Technicolor locales once we get by a shoddy-looking set-bound exterior during some an early nocturnal combat between white settlers and Shoshones.
Extras: Includes a commentary by Toby Roan.
Read the Full Review 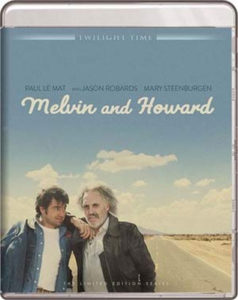 Available via ScreenArchives.com
Twilight Time, Comedy, $29.95 Blu-ray, ‘R.’
Stars Paul Le Mat, Mary Steenburgen, Jason Robards, Pamela Reed.
1980. Despite several accolades, M&H might not even work were it not for lead Paul Le Mat as dreamer-to-a-fault Melvin Dummar, a Utah chronic hard-luck case who claimed to have picked up an injured old derelict in the desert who turned out to be Howard Hughes — who, upon his 1976 death supposedly left 1/16th of his assets to Dummar in his will.
Extras: Includes a commentary carried over from the old DVD of director Jonathan Demme and production designer Toby Rafelson.
Read the Full Review