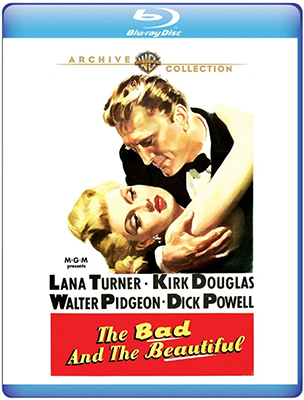 The Bad and the Beautiful

Available via Warner Archive
Warner, Drama, $21.99 Blu-ray, NR.
Stars Lana Turner, Kirk Douglas, Dick Powell, Gloria Grahame, Walter Pidgeon.
1952.The Bad and the Beautiful, a critical/commercial hit in its day, is tops of its kind if you’re into Vincente Minnelli’s specialized approach to sometimes gasket-blowing melodrama. A dissection of Hollywood’s underbelly all dressed up in MGM slickness, the relativelycalm-side B&B is both savvy and the next thing to over-the-top, without much attention paid to what was really going on in the industry at the time.
Read the Full Review 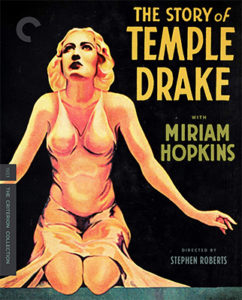 The Story of Temple Drake

Criterion, Drama, $29.95 DVD, $39.95 Blu-ray, NR.
Stars Miriam Hopkins, William Garage, Jack La Rue, Florence Eldredge.
1933. Paramount’s The Story of Temple Drake remains one of the more obscure Hollywood releases to the masses when it comes to making a list of the ones that caused a scandal in their day.
Extras: The always persuasive Imogen Smith makes a thoughtful feminist case about Miriam Hopkins’ title character, while acknowledging certain ambiguities. Film critic Mick LaSalle also is a bonus interviewee. Rounding out the bonuses are cinematographer/Motion Picture Academy president John Bailey — who joins Matt Severson (head of that organization’s Margaret Herrick Library) to look at the original storyboards, which (again) suggest a horror movie.
Read the Full Review