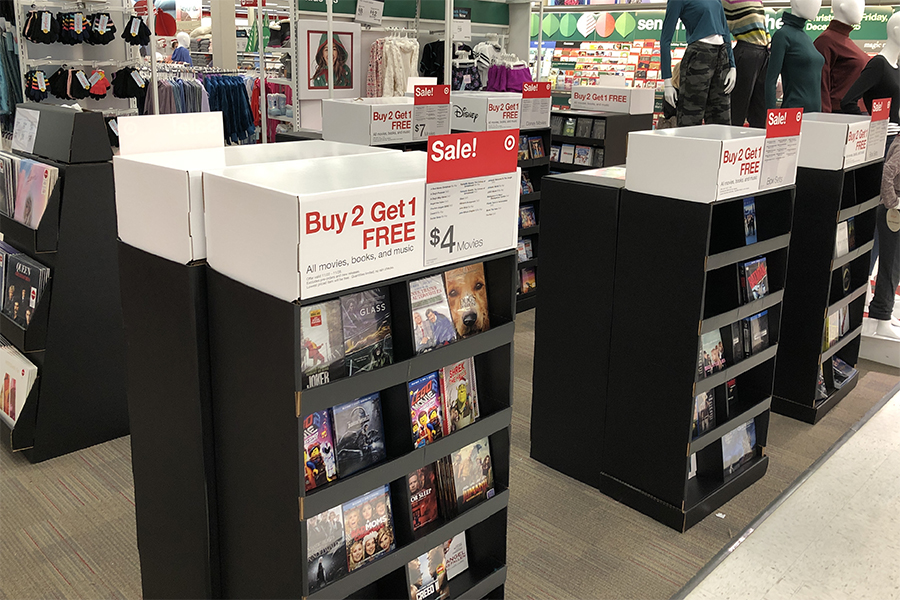 DVD and Blu-ray Black Friday 2020 sale displays at a Target in Tustin, Calif.

Preparations for annual Black Friday sales left retailers mostly ignoring the new DVD and Blu-ray disc releases of Nov. 24, not that the list had many notable titles to begin with.

Due to the coronavirus pandemic and a desire to cut down on the massive crowds that typically show up for the bargains offered the day after Thanksgiving, stores have been offering special discounts for most of the month already. This week, however, has seen merchandise configurations more akin to what a Black Friday would typically look like.

For instance, a Target in Tustin, Calif., set up cardboard displays of catalog DVDs and Blu-rays near the front of the store in what is usually an area for women’s clothing. Target is running a buy-two-get-one-free promotion on books, movies and music. Blu-rays and DVDs could be had for as low as $4, $7 and $9.

A Best Buy in Costa Mesa, Calif., had a sizeable line the evening of Nov. 24, which is likely more due to a resurgence of pandemic restrictions limiting the number of guests allowed in the store. Best Buy’s deals include select Blu-rays for $5.99; Blu-rays and 4K Ultra HD Blu-rays for $7.99 or $9.99; Disney movies starting at $9.99; and collectible Steelbooks for $14.99.