Even a pandemic can’t prevent major Hollywood titles from getting their retailer exclusives. Warner’s Birds of Prey and the Fantabulous Emancipation of One Harley Quinn landed at retail May 12 with exclusive packaging options from all three of the major national home video retailers.

Best Buy offered its typical Steelbook packaging for the 4K Ultra HD Blu-ray combo pack of Birds of Prey, at $34.99.

The nation’s largest electronics chain, which has been primarily serving customers through online orders and curbside pickups during the pandemic, also offered a promotion allowing customers to save $5 on another Warner movie with the purchase of Birds of Prey.

Target offered the Blu-ray/DVD combo pack at $24.99 with exclusive box art touting a digital comic book. The cartoony art style likely inspired Target to include the phrase “This is a live-action movie” on its “Only at Target” sticker placed on the outside wrapping.

Walmart had a couple of options for Birds of Prey. First was a single-disc DVD edition with exclusive box art for $16.96, contrasted with the regular two-DVD version available everywhere else for $17.99. Walmart didn’t offer the wide-release DVD on its shelves, but did sell it online.

The Walmart DVD includes just the “Birds of a Feather” featurette, rather than the full array of extras fans could get for just $1 more. 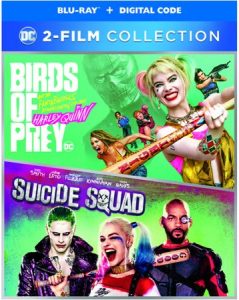 Also available at Walmart were Blu-ray and DVD double features of Birds of Prey with 2016’s Suicide Squad, the previous appearance of Margot Robbie as Harley Quinn.

Among other titles, Fox’s The Call of the Wild arrived on disc May 12 as well, though the disc versions of the film are nowhere to be found on Amazon. Likewise, preorders for the May 19 disc release of Fox’s Downhill are absent as well. Amazon has had longstanding issues with listing new Disney titles, and it appears some of those problems have now carried over with the Disney-owned Fox releases as well.

Interestingly, one of the biggest concerns about Call of the Wild among online commenters at sites such as Blu-ray.com is that it was being released without a slipcover.