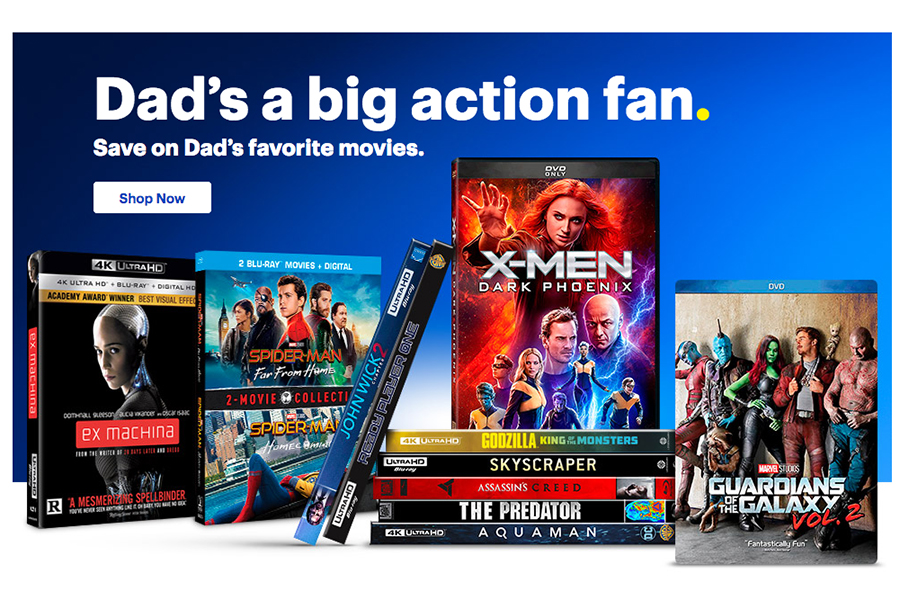 Best Buy's Top Deals ad for the week of June 9

The impact of the coronavirus pandemic on theatrical shutdowns is starting to be felt at retail as the lineup of major new releases is beginning to dwindle week after week. June 9, the only title of note to make it to shelves was Universal’s controversial The Hunt.

But retailers didn’t offer anything special for the title, instead using their weekly promotional space to list sales on catalog titles and some recent releases in advance of the June 21 Father’s Day holiday.

Target, for example, promoted 20% off a selection of 4K movies.

And Best Buy had another prominent Father’s Day-themed ad on its website, this time proclaiming “Dad’s a big action fan. Save on Dad’s favorite movies.” The sale included a a selection of $9.99 Blu-rays and $14.99 4K Ultra HD Blu-rays.

While not touted as a Father’s Day promotion per se, Walmart now has a section of Warner titles at $5 for DVD and $7.50 for Blu-ray, with special slipcovers displaying a iconic item and quote from the film. Among the selection was Gone With the Wind, which was just pulled down from the HBO Max streaming service in a nod to racial sensitivity.