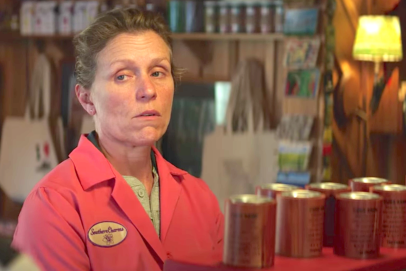 Frances McDormand won high marks for her acceptance speech in a Fandango survey.

In the hours after the Academy Awards, Fandango surveyed more than 1,000 Oscar-watching moviegoers on their feelings about the show, host, speeches, snubs and surprises, and Best Actress winner Frances McDormand (Three Billboards Outside of Ebbing, Missouri) gave the best acceptance speech at the Oscars, according to the survey, leading the field with 37% of the fan vote.

As for the biggest omission of the night, 44% of moviegoers point to the virtual shutout of Lady Bird as the Academy’s top snub. At the same time, 48% of fans claim Jordan Peele’s Best Original Screenplay win for Get Out was Oscars’ happiest surprise.

According to the survey, the biggest Oscar snubs were: Lady Bird, for a total shutout in all categories (44%); “This Is Me” (The Greatest Showman), Best Song (20%); and War for the Planet of the Apes, Best Visual Effects (14%).

The happiest Oscar surprises were, according to the survey: Get Out, Best Original Screenplay by Jordan Peele (48%); The Shape of Water, Best Picture (29%); and Call Me by Your Name, Best Adapted Screenplay by James Ivory (11%).

About the show itself, according to survey respondents:

— 72% enjoyed the Oscar stars surprising moviegoers at the theater next door.

— 61% said Kimmel should host the Oscars again next year.

“Film fans were hoping that Greta Gerwig’s fresh and funny coming-of-age tale Lady Bird would bring home some gold, but at the same time, moviegoers are happy to see Get Out get proper recognition as the most strikingly original screenplay of the year,” said Fandango managing editor Erik Davis in a statement. “It makes perfect sense that moviegoers would pick Frances McDormand’s unforgettable acceptance as the evening’s most memorable speech, as ‘inclusion rider’ has been trending on Twitter ever since she introduced the concept to many at the Oscars.”

The majority of Oscar-winning movies are already available on Fandango’s premium on-demand video service FandangoNow. Fandango is also offering its Awards Season Gift Card here, good for catching up with all the Oscar winners on the big screen (via Fandango) or at home and on-the-go (with FandangoNow).