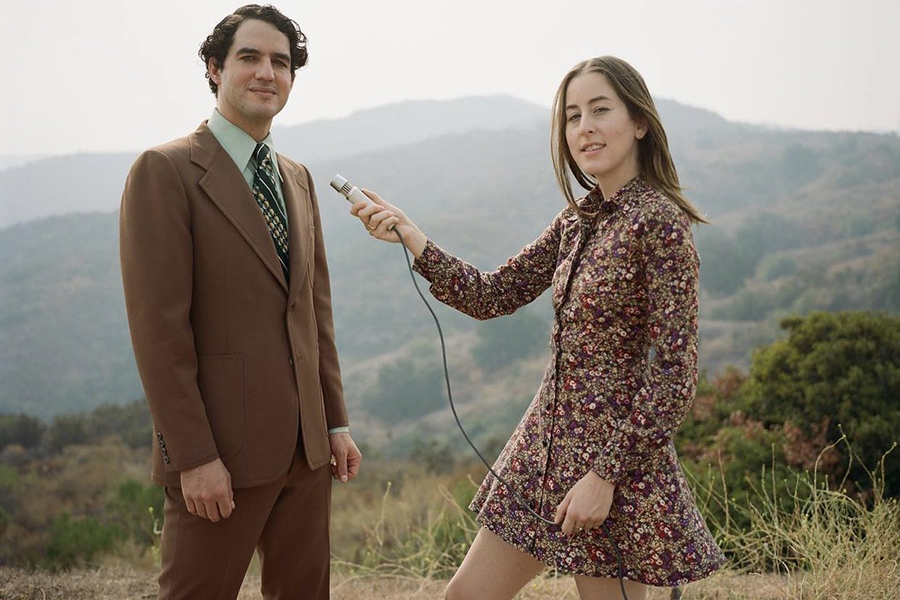 Titles new to DVD and Blu-ray Disc May 17 include Licorice Pizza and Infinite, while Morbius becomes available through digital retailers. 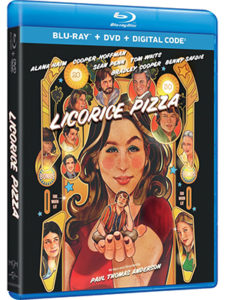 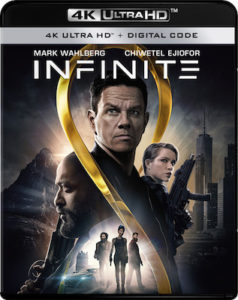 The sci-fi actioner Infinite will arrive for digital purchase April 12 and on 4K Ultra HD, Blu-ray and DVD May 17 from Paramount Home Entertainment. Starring Mark Wahlberg and Chiwetel Ejiofor and directed by Antoine Fuqua, the film is based on the book The Reincarnationist Papers by D. Eric Maikranz. The film follows characters who must use memories and skills from past lives to protect the future of humanity in a race against time in the fight between good and evil. Wahlberg plays Evan McCauley, who is haunted by skills he has never learned and memories of places he has never visited. As he is self-medicated and on the brink of a mental breakdown, a secret group that call themselves “Infinites” comes to his rescue, revealing to him that his memories are real — but they are from multiple past lives. The Infinites bring Evan into their extraordinary world, where a gifted few are given the ability to be reborn with their memories and knowledge accumulated over centuries. With critical secrets buried in his past, Evan must work with the Infinites to unlock the answers in his memories in a race against time to save humanity from one of their own (Ejiofor) who seeks to destroy it. The film also stars Sophie Cookson, Jason Mantzoukas, Rupert Friend, Liz Carr, Toby Jones and Dylan O’Brien.

The third season of “Succession” will be released on DVD and digital May 17 from Warner Bros. Home Entertainment. Season three of “Succession,” the HBO original series that follows the saga of a powerful media family, includes all nine episodes. The drama series tracks the lives of a wealthy patriarch and his four grown children who control one of the biggest media and entertainment conglomerates in the world.”Succession” explores themes of power and family dynamics through the eyes of patriarch Logan Roy (Brian Cox) and his children Kendall (Jeremy Strong), Siobhan (Sarah Snook), Roman (Kieran Culkin) and Connor (Alan Ruck). The series’ second season won a total of seven Emmys, including Outstanding Drama Series. Season three finds Logan in a perilous position, scrambling to secure familial, political, and financial alliances after he was ambushed by his rebellious son Kendall. After Kendall’s impulsive decision to expose the company’s sprawling scandal, the family is left to each contemplate their own future. Tensions rise as a bitter corporate battle threatens to turn into a family civil war, with the Roy family navigating the looming questions of who will take over in a post-Logan world.

The Marvel Comics-based action film Morbius will be released for digital purchase May 17 from Sony Pictures Home Entertainment. In the film, Oscar winner Jared Leto plays the enigmatic antihero Michael Morbius, who is dangerously ill with a rare blood disorder. Determined to save others suffering his same fate, Dr. Morbius attempts a desperate gamble. While at first it seems to be a radical success, a darkness inside him is unleashed. It arrives on 4K Ultra HD, Blu-ray and DVD June 14.

Season one of the History series “Great Escapes With Morgan Freeman” arrives May 17 on DVD from Lionsgate. Hosted and narrated by Morgan Freeman, the series takes a deep dive into the inner workings of some of the most notorious prison escapes in history throughout the world. The eight-part docuseries explores prison escapes from Alcatraz and Rikers Island to Germany’s Stalag Luft III and HM Prison Maze in Belfast. Featuring recreations and cutting-edge visual effects, along with interviews with some of the prisoners themselves, their families, their cell mates and guards who were there, “Great Escapes with Morgan Freeman” uncovers every step of the most intricate and daring escapes — by convicted criminals, POWs and political prisoners — and the exhaustive manhunts that ensued.

The Western The Man Who Shot Liberty Valance will arrive May 17 for the first time ever on 4K Ultra HD with high dynamic range (HDR) as part of the Paramount Presents line from Paramount Home Entertainment. Four-time Academy Award-winning director John Ford brought together an all-star cast for what is considered by many critics to be a quintessential — and yet pioneering — Western late in his storied career. Starring James Stewart and John Wayne (together for the first time), alongside Vera Miles, Lee Marvin, John Carradine and Lee Van Cleef, the film tells the story of a senator (Stewart), his old friend (Wayne), and a despicable outlaw called Liberty Valance (Marvin). Adapted from a short story by Dorothy M. Johnson, the screenplay by James Warner Bellah and Willis Goldbeck gave us the often-quoted line “When the legend becomes fact, print the legend.” 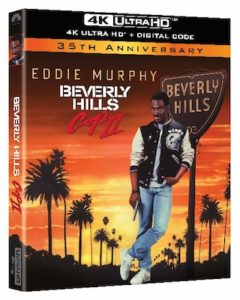 The Eddie Murphy action-comedy Beverly Hills Cop II will be released on 4K Ultra HD Blu-ray May 17 from Paramount Home Entertainment for its 35th anniversary. Directed by Tony Scott, who followed up Top Gun with this sequel, Beverly Hills Cop II was originally released on May 20, 1987. Produced by Don Simpson and Jerry Bruckheimer, it was a box office success, earning more than $153 million domestically and becoming the No. 1 film of 1987. The movie also earned Academy Award and Golden Globe nominations for Best Original Song for “Shakedown.” In the film, Axel Foley (Murphy) is back where he doesn’t belong, this time going “deep, deep, deep undercover” to stop a gang of international munitions smugglers. Also returning are Judge Reinhold and John Ashton as Murphy’s crime-busting sidekicks. The release includes Dolby Vision and HDR-10 and Dolby 5.1 DTS Master Audio. 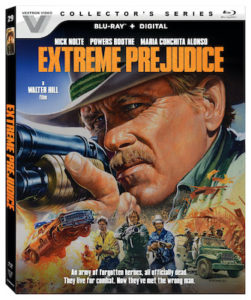 Vestron Video’s 1987 action Western Extreme Prejudice, starring Nick Nolte, is being released on Blu-ray Disc May 17 from Lionsgate. In addition to Nolte, the film, directed by Walter Hill (The Warriors, 48 Hrs.) with a story co-written by Academy Award nominee John Milius (1979, Best Writing/Screenplay Based on Material from Another Medium, Apocalypse Now), also stars Powers Boothe, Maria Conchita Alonso (The Running Man, Predator 2, Spread), Michael Ironside (Starship Troopers, Total Recall, Top Gun) and Rip Torn. The gritty, modern Western follows Texas Ranger Jack Benteen (Nolte) who locks horns with a former friend, Cash Bailey (Boothe), now a ruthless drug kingpin. Though they’re on opposite sides of the law, they share a love interest in the sensual Sarita (Alonso). When a crew of rogue soldiers descends upon the border town for an off-the-books mission, all roads lead to a bloody, to-the-death showdown, as loyalties shift and the lines between good and evil are blurred.

no Lorber May 17 releases the 1970 revenge thriller Violent City, starring Charles Bronson, Telly Savalas and Jill Ireland. The film, which predates his iconic “Death Wish” franchise, finds Bronson playing a former hitman framed by his ex-boss and left for dead. He tracks the shooter and his beautiful mistress (Ireland) to New Orleans. But when he takes both revenge and the woman, he finds himself blackmailed by a powerful crime boss (Savalas) who wants the fiercely independent gunman to join his organization. He refuses, and finds himself the target of another hit.  The two-disc set includes both the original Violent City — in a 2K restoration in English and Italian with optional English subtitles — and the 1973 U.S. cut, The Family.

Belle, the critically hailed anime film from Academy Award-nominated director Mamoru Hosoda, is available as a Blu-ray/DVD combo pack May 17 from GKIDS and Shout! Factory. A heartfelt story of growing up in the era of social media, Belle also will be available in a Steelbook edition exclusive to Target.

The foreign coming-of-age drama The Fashion Lover will be released through digital retailers May 17 from Ariztical Entertainment. In the Italian film, young Sardinian shepherd boy Giovannino dreams of becoming a fashion designer. Unfortunately, his small rural town is a long way from the bright lights. With his cheating father out of the picture, Giovanni must reckon with an angry mom. But two friends, a fashion teacher with connections and a buddy who’ll do anything for him, give Giovanni hope. Directed by Marco Pollini, the film stars Pino Ammendola, Frencesco Desogus, Mariandrea Cesari, Valentina Sulas and Davide Garau.