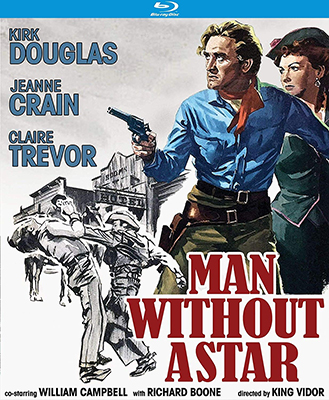 Despite a fun supporting cast (look: there’s Jay C. Flippen again) and a keen balance of humor aside from some ugly barbed-wire injuries you’d only wish on a few, 1955’s Man Without a Star is a Kirk Douglas vehicle through and through. And there’s nothing wrong with that, unless perhaps you were another performer or crew member having to put up with his famous ego.

Released without too much fanfare in March of 1955 but given some pacing oomph by a legendary director who’d found himself needing work (King Vidor), this cattle-heavy Western with sex is one of the more entertaining outdoor dustups from Red River’s Borden Chase, who shared writing honors here with D.D. Beauchamp. The latter’s credits included not just Audie Murphy pictures but also Abbott and Costello Got to Mars and Vera Ralston’s Belle Le Grand, a duo that might well spark a sense of humor on the part of anyone who had to write them for a living, assuming the chore didn’t kill him.

Back to Kirk. People don’t get to be sustained superstars by accident, so it’s instructional to see what workhorse Douglas was doing in the mid-’50s to build his base, through either luck or design, via one of the shrewder career blueprints I’ve ever seen. Star’s March release, right after nonentity The Racers came and went in February, meant that Disney’s giant squid extravaganza 20,000 Leagues Under the Sea would have been barely out of first-run theaters from its Christmas-of-’54 release and, in fact, possibly still playing neighborhood second-run houses. The Jules Verne adaptation cemented Douglas as a boomer-kid action favorite, you have to remember that in this period (Disney aside) there was far less distinction between adult and kids’ fare because of a) cleansing censorship, however waning the Production Code still was; and b) parents, and especially fathers, who’d survived both the Depression and World War II and didn’t tolerate wussie-dom in their sons.

Thus, as the ’55 bounty continued, kids saw Douglas with a wooden horse instead of a real one in October’s Ulysses (which had come out in Italy a year before) and then The Indian Fighter at the very end of ’55. Meanwhile, his portfolio was about to diversify for a more intellectual fan base by his playing Van Gogh in Lust for Life, which got him an Oscar nomination and a best actor citation from the New York Film Critics Circle — which was always the more impressive feat to me because Douglas’s acing style wouldn’t have been any shoo-in fit with the New York film establishment. This was then compounded by the super-commercial Gunfight at the O.K. Corral in ’57 (gorgeous visually, though the most soulless movie of the bunch) and Paths of Glory, which brought decades of critical street cred and is still going. Later, Paramount (which still had U.S. control of Ulysses in those days), re-issued the Homer saga in a national double bill with Cecil B. DeMille’s Samson and Delilah to reach the younger boomers it had missed the first time. Oh, and let’s not forget The Vikings, which absolutely ruled the roost in grand-school playground discussion (I speak from experience).

Douglas did all these plus forgettable Top Secret Affair in a highly compressed four-year period, so you get the idea. Star, which played first-run downtown in my city with George Montgomery in Seminole Uprising (dust off the Oscars) would have pleased both adults and kids at the time, though kids would more likely have gravitated toward Richard Boone threatening Douglas with a pick axe from a scene that got big play in the print ads. Older viewers likely gravitated more toward Douglas’s scenes with brothel babes (er, pardon me, saloon workers) and their employer madam (er, hostess) Claire Trevor. Plus all the jokes about the town’s mercenary new ranch owner Jeanne Crain (refreshingly novel casting) installing an indoor bathroom just off a bedroom with her large outlay of colognes, which cheeky Douglas sprinkles in his hair like Vitalis.

What anyone can see is that the actor’s role as a savvy ranch-hand drifter who’s not exactly awash in funds is an ideal one for him. First, Douglas gets to sing (again) on screen after his then recent performance of “Whale of a Tale” in Disney’s Leagues had spurred a Decca single. Second, he gets to show what great physical shape he’s in — though not for a while because there’s a secret under his shirt that’s not revealed for a while. Third, perhaps there’s a secret under his pants as well, though all we know for sure is that he seemingly agrees to do a favor for conniving Crain in return for sexual favors, only to renege after it’s heavily implied the deal was consummated. The censors obscure this, but, hey, it was early ’55, and Spin and Marty’s cleaned-up portrayal of ranch life (I spent parts of several Colorado summers absorbing that milieu) hadn’t even hit the airwaves yet.

Fourth, Douglas gets to deliver worldly wisdom to a green youngster (William Campbell) after they meet stealing rides on a boxcar — kind of the way Lee Marvin mentors Keith Carradine in Robert Aldrich’s Depression-set gem Emperor of the North, other than the fact that (though mixed up and prone at times to flirt with the Dark Side), Campbell’s character isn’t the crud Carradine is. Fifth, Douglas gets to wear some cool-looking Western shirts, though these so-called functional cowpoke duds look like the apparel I currently see on sale for $70 a pop. (Leaving aside one “dude” monstrosity that Campbell’s character shows up in for comedy relief, I’ve always liked the Western costuming at Universal-International during this period just on general principles — as with Donna Reed’s distinctively eye-catching garb in the Borden Chase-John Sturges Backlash.) Sixth, Douglas gets to hang out a lot with prostitutes (er, saloon girls). As for this last, James Arness may have been six months away from establishing “Gunsmoke” as the preferred pick of TV’s burgeoning “adult Westerns,” but Douglas already had the market cornered when it came to frontier frolic.

As suggested by Toby Roan’s Blu-ray commentary, Vidor was neither the first nor last director with whom Douglas didn’t always see eye to eye (I remember being at a Sydney, Australia party in the early ’80s when crew members walked in from a shoot on The Man From Snowy River grousing about him). But the narrative moves smoothly with all kinds of small but pleasing touches until things kind of fall apart in the last 10 or 15 minutes; a rushed conclusion turns an 89-minute running time into less of a virtue than it initially seems to be. Though not a deal-breaker, it also starts to get a little tiresome watching Douglas switch allegiances back-and-forth between the desperate small ranchers (who use barbed wire) and Crain (who’s for open usage) — a decision-making process made easier when Crain hires a sadistic creep played in prototypically sociopathic Richard Boone fashion and a character with whom Douglas has some history. Tenderfoot Campbell also has trouble making up his mind, though his ultimate decision is made easier by one of the small rancher’s smitten daughters, played by onetime Miss USA Myrna Hansen. She could probably keep even Maurice Chevalier down on the farm after he’d seen Paree — especially when indoor plumbing is looking like the new thing.

U-I was still utilizing the three-strip Technicolor process, and Star was one of the last movies do so before August’s Foxfire brought its glories to a close, though Roan notes that the crew couldn’t have been too thrilled about hauling those 600-pound cameras across what look like hot locations that hopefully, like Crain, eschewed outhouses. Once again compensating for the fact that Tex Ritter was the one who got to sing the title tune on screen to High Noon, Frankie Laine (who had the “High Noon” hit recording) once again made up for it via opening-credits vocal honors in a movie that followed. The historical chronology goes Blowing Wild, Man Without a Star, Strange Lady in Town, Gunfight at the O.K. Corral, 3:10 to Yuma, Bullwhip and the unforgettable opening to TV’s “Rawhide” — all setting the table for, many years later, Blazing Saddles.

The 1955 movie year also gave us Frankie starring with “Mr. Show Business” Keefe Brasselle (the only performer I can envision still yearning to do blackface even after Chuck Berry was charting) in Blake Edwards’ directorial debut, Bring Your Smile Along — a movie I believe got the Harvard Lampoon Award for the year’s most misleading advertising or something like that. In it, Laine donned railroad garb to sing his great rendition of “The Gandy Dancer’s Ball” in, I’d say, even a slightly more heartfelt version than his 1952 recording. Though in the process, he did prove again that there are some body types that shouldn’t wear overalls.