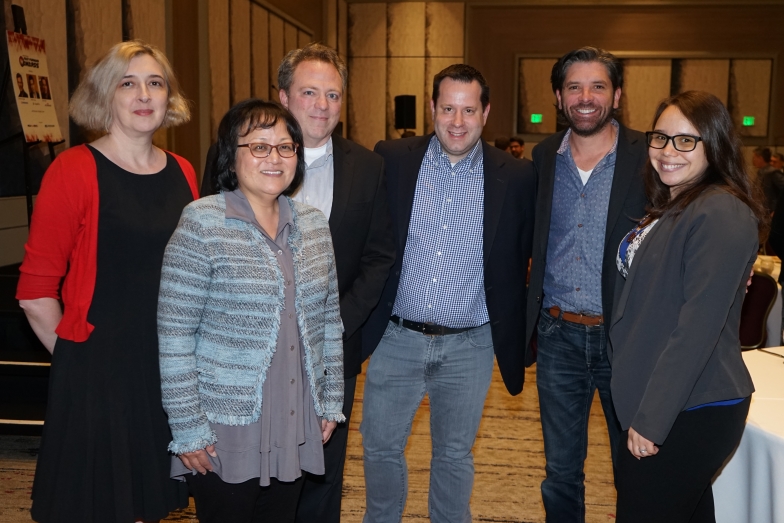 FandangoNow VP of home entertainment Cameron Douglas, Redbox CEO Galen Smith, Google Play head of media and entertainment Jonathan Zepp, and the team at Apple iTunes were honored with Fast Forward Awards at a luncheon April 4 in Los Angeles at the Universal Hilton.

The luncheon was produced by Media Play News and hosted by the Entertainment Merchants Association, which used the occasion to announce a new Leadership Development Foundation to foster executive talent.

“All of today’s honorees are truly worthy of recognition for their leadership in our industry,” said EMA president and CEO Mark Fisher.

Media Play News publisher Thomas K. Arnold noted that all of the honorees are involved in the digital transactional business. Not all consumers want to get their entertainment buffet-style with the content curated for them as offered by subscription streaming services; many consumers would like to choose the content they would like to see a la carte, he said.

Warner Bros. Entertainment SVP of sales Michael Rweyemamu presented the award to Smith of Redbox, which has nearly doubled the selection of films and TV shows available on its year-old digital movie store, Redbox On Demand, and last December announced a new deal in which its app is featured on all Vizio Smartcast TV. Rweyemamu noted the irony of the occasion, considering the rocky relationship between the studio and the kiosk company several years ago when the two fought over release windows for low-priced rentals.

“Ten years ago, had you told me I’d be presenting an award to Redbox, I’d have said, ‘Hell, no!’” Rweyemamu joked.

He praised Smith for his leadership.

“Galen, you’ve been a great partner,” he said. “We started off on a rocky road like some relationships, but we’re in a really good place right now. And a lot of that has to do with the fact that you were really tenacious. You were really disciplined, really open to conversations to allow us to be where we are today.”

Smith also noted the evolution of the relationship between the two companies.

“In a similar vein, receiving an award from Warner Bros. I didn’t think was ever going to happen,” Smith said.

The company’s Redbox on Demand digital service “is a real natural evolution for our business,” Smith said.

“We’ve got 50 million customers that rent from us every year; it’s an opportunity for us to help them move to digital,” he said. “This is the last bastion of customers who haven’t moved yet. We have an opportunity to bring them over.”

He also praised the transactional model.

“We did a stint in a more of an SVOD-type business, and it didn’t really work,” he said, in reference to a failed joint venture with Verizon. “Our consumers are transactional, and so we want to do everything we can to support the business.”

In presenting the award to FandangoNow’s Douglas, industry veteran and former DreamWorks home entertainment chief Kelly Sooter praised him for his ability to anticipate trends and forge strong partnerships and lasting relationships — and for always being in touch with the consumer.

“He knows everything about … how consumers behave,” she said.

Douglas noted he got involved in the digital business at DreamWorks when he was asked to help with a startup (M-GO, which eventually was acquired by movie service Fandango and became FandangoNow).

“As we finally refined what we were doing and launched in 2013 as a transactional service, I truly felt like I was now building the future of digital home entertainment,” Douglas said.

He noted FandangoNow’s early and strong support for 4K and initiatives such as binge bundles and the “Fresh Picks” program, which curates titles deemed “Fresh” by sister service Rotten Tomatoes.

Praising Google Play’s Zepp, who was unable to attend, Paramount Pictures president of worldwide home media distribution Bob Buchi said, “He truly has the talent and the vision to market very impressively to consumers and really change the way that they behave.”

Buchi noted that Google Play, which is in its seventh year, “really put a movie store in the hand of millions of consumers with the Android mobile platform [and] really elevated and streamlined the experience of purchasing or renting a digital product, and opened up a whole new world in literally over 100 countries.”

“They continued to enhance the product day in and day out,” he said. “It’s now on every major television manufacturer and streaming sticks, so it’s really never been easier to rent or to purchase a movie.

“They’re also super champions of 4K which is great for adoption and great for all of our futures.”

Google Play Movies & TV is currently on a big 4K push, automatically upgrading customers’ past movie purchases to the new format, so they can stream them in 4K, even if the movies were originally purchased in standard or high definition.

Google Play’s Bill Kotzman accepted the award on Zepp’s behalf and read a statement from the honoree: “Transactional home entertainment is and will remain a key part of the media and entertainment business.… Google continues to invest heavily in transactional, and we’re excited to continue to grow the category in partnership with all of you.”

The EMA’s Steven Apple accepted the award for the iTunes team. Apple’s iTunes service began the year with a game-changing deal with No. 1 TV manufacturer Samsung. New Samsung SmartCast TVs will allow consumers to access their iTunes movie and TV show libraries through a new app.

Photos of the event are here.