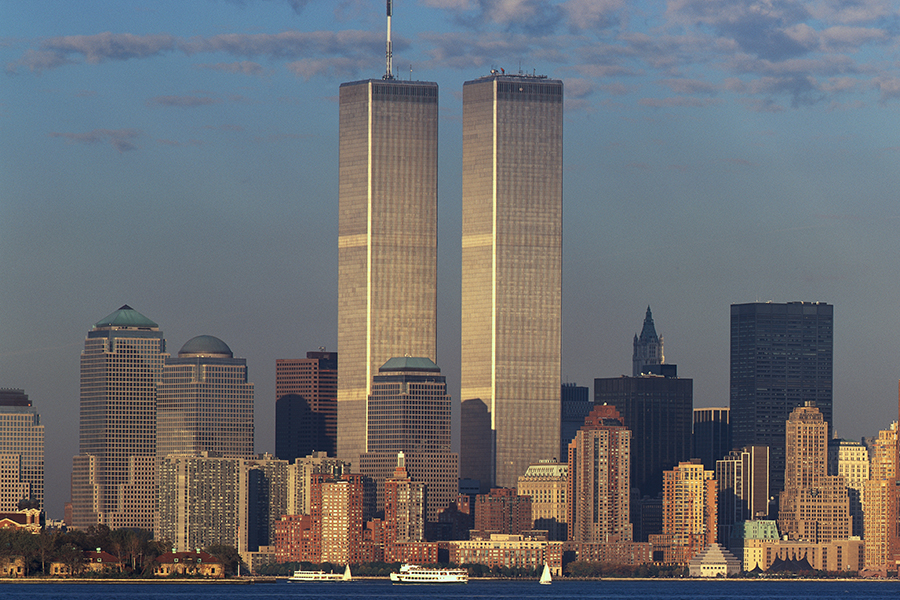 The devastating impacts of the terrorist attacks of Sept. 11, 2001, reached far and wide, beginning with the nearly 3,000 lives lost that day. The aftermath of the devastation would leave people, governments and businesses reeling to take stock of the priorities of a post 9/11 world.

In Hollywood, studios scrambled to assess productions that featured storylines and settings that could be seen as striking a raw nerve in the wake of the attacks.

With the World Trade Center’s Twin Towers collapsing after being struck by two of the four hijacked planes, a number of films planning to feature the buildings were re-edited.

Among them was Ben Stiller’s Zoolander, slated for theatrical release Sept. 28, 2001, just two-and-a-half weeks after the attacks. Stiller, who directed and starred in the film, made the decision to digitally remove the Towers from any shots of the city in the background.

Shots of the Towers were similarly removed from movies such as Don’t Say a Word and Serendipity, both of which were released within weeks of the attacks, as well as 2002 films Mr. Deeds, Stuart Little 2, Kissing Jessica Stein, People I Know and Igby Goes Down.

The shots of the Towers were eventually restored to Zoolander for its 2016 Blu-ray Disc release, while the People I Know DVD included that movie’s original Towers shots as deleted scenes.

It’s certainly not unusual for a horrific real-life event to lead to an alteration of creative content, beyond the typical preemptions or delays of episode airings.

In 1981, the TV series “The Greatest American Hero” had debuted March 18 with a main character named Ralph Hinkley. After President Ronald Reagan and members of his staff were shot March 30 by John Hinkley Jr., the character’s last name was changed to Hanley for the rest of the first season.

But the attacks of 9/11 took such changes to the next level.

The ending of Men in Black II, filmed in 2001 for release in summer 2002, was originally supposed to feature the World Trade Center, but was reshot with the Statue of Liberty instead.

Sony Pictures in July 2001 had released the teaser trailer for 2002’s Spider-Man, which featured the title superhero capturing a group of bank robbers by trapping them in a giant web spun between the Twin Towers. The film’s planned promotional campaign heavily featured the Towers as a symbol of New York City, Spider-Man’s hometown, including a poster with the buildings reflected in the Webslinger’s eyes. Sony recalled the posters and discontinued the teaser.

“When the movie trailer for Spider-Man was released and sent to us, we received a phone call from the studio that all of the product was being recalled and had to be returned ASAP, with a modified trailer being cut, to remove the World Trade Center images from it,” said Frank Rampino, VP of Flash Distributors. “It seems like just yesterday and realizing that 20 years have actually passed by is both incredible and humbling.”

For the final film, shots of the Towers were removed (though they can still be spotted in the distance in a few shots), while adding scenes of Spider-Man with the American flag, and New Yorkers fighting back against the Green Goblin with the line, “you mess with one of us, you mess with all of us.”

Disney’s Lilo & Stitch, released in 2002, altered a climactic sequence that involved Stitch flying a hijacked 747 through a city to save Lilo. It was changed in the final film to a spaceship flying through mountains, though the original animation was eventually released in 2009 as a bonus feature on the two-DVD Lilo & Stitch: Big Wave Edition.

A scene in the 2002 sci-fi remake The Time Machine was changed so that a scene set in the future of debris from the moon crashing into New York wouldn’t resemble the attacks.

The first episode of “24,” which aired about two months after 9/11, was quickly re-edited to remove a shot of an exploding passenger plane.

The attacks even impacted screenings of older movies. The 20th anniversary re-release of Steven Spielberg’s E.T. — The Extra-Terrestrial (the version that famously replaced guns with walkie-talkies) in 2002 changed a line of dialogue about a Halloween costume from “You’re not going as a terrorist” to “You’re not going as a hippie.” The release of E.T. on Blu-ray for its 30th anniversary in 2012, and on 4K Ultra HD Blu-ray for its 35th in 2017, restored the original theatrical cut.

References to terrorists were also removed from TV airings of 1985’s Back to the Future.

And the 1998 film The Siege, about the U.S. government putting Muslims in concentration camps following a terror attack, also had the Towers removed from shots of New York in some versions.

Once the immediacy of the tragedy of 9/11 subsided a bit, one of the constant reminders of the lives lost that day became the way the attacks forever altered the iconic New York skyline — especially before the empty void where the Twin Towers once stood was replaced with the Freedom Tower.

A staple of films since the early days of the industry, the New York skyline was redefined by the construction of the Twin Towers, which were completed in 1973. In the ensuing years, the Towers would appear in nearly 500 movies.

One of the first to feature them prominently was the 1976 King Kong remake, where they served as the setting for the climactic showdown, just as the Empire State Building had been in the original 1933 Kong. In the remake, the giant Kong famously jumps from one tower to the other as he is attacked by military helicopters. As noted by film historian Ray Morton on his commentary for Shout! Factory’s recent Blu-ray of the 1976 film, some of the upper levels of the tower were still being finished and painted, which can be seen as Jeff Bridges watches the attack on Kong from the top of one of the towers.

Paramount’s DVD of the film, released in 1999, used the original poster as cover art, featuring Kong standing atop the Twin Towers while being attacked by the military. When the DVD was reissued in 2005, the box art was changed to Kong holding Jessica Lange. Shout! Factory’s Blu-ray offers the original Twin Towers art as one of the options on its reversible slipcover.

John Carpenter’s 1981 sci-fi dystopia Escape From New York depicted a future (stated as 1997) in which Manhattan had been turned into a walled-off prison. The World Trade Center towers are used as an entry point for Kurt Russell’s Snake Plissken to infiltrate the island using a glider.

In 1998’s Armageddon, the Towers were among several New York City landmarks struck by a meteor shower in the opening of the film. The sequence ends with a prominent shot of the World Trade Center with significant damage and smoke flowing from one of the towers — an image similar enough to what happened on 9/11 that many TV airings of the film edited out the scene.

The other “asteroid hitting Earth” film of 1998, Deep Impact, showed the Towers surviving a tidal wave that destroys New York City because they are so tall. Some TV broadcasts removed shots of them following 9/11.

Nearly 20 years earlier, the 1979 film Meteor depicted the Towers exploding after being hit by a fireball from space.

One of the final movies to significantly feature the Twin Towers prior to the attacks was Steven Spielberg’s A.I. — Artificial Intelligence, released in June 2001. Set in the 22nd century, the film features a robot whose attempts to become a real boy take him to a flooded New York City, where the Towers are shown surrounded by water. The film soon jumps ahead thousands of years to depict the tops of the Towers as monuments to humanity among a frozen landscape — an eerie image rendered impossible by the events of 9/11 just a few months after the film’s release. Still, the film was released unaltered on DVD in March 2002.

In the 20 years since the 9/11 attacks, films and TV shows have made an effort to re-create the Towers when appropriate.

One notable example again involves Spielberg, whose 2005 film Munich, about Israeli operatives seeking revenge for the 1972 slaying of the country’s Olympic athletes by Palestinian terrorists, ends with a shot of the Towers in 1977, which some have interpreted as the film connecting protracted violence in the Middle East to 9/11 as a warning against military policies that can lead to unintended blowback.

Using visual effects to depict the Twin Towers became vital to director Robert Zemeckis’ 2015 film The Walk, a docudrama that depicts French high-wire artist Philippe Petit’s famous stunt in August 1974 of surreptitiously setting up a cable between the top floors of the towers and walking back and forth between them eight times in 45 minutes a quarter-mile above the ground.

Of course, re-creating the Towers also became central to films that actually depicted the events of 9/11, such as the 2006 films United 93 from director Paul Greengrass, and World Trade Center from director Oliver Stone. The 2010 film Remember Me, while not about 9/11 per se, uses the attacks on the Towers as a plot twist for a character drama (which many critics considered distasteful).

Depicting the Towers also became a way for creators to demonstrate a drastic alteration of reality in fiction. The 2009 film Watchmen, set in an alternate reality version of 1985, depicts the Towers in several scenes as one of the few buildings still standing after an attack levels most of New York.

Also in 2009, the Fox TV series “Fringe” used a shot of the intact Twin Towers to reveal the characters were in a parallel universe in which they weren’t attacked.

Prior to 9/11, Hollywood didn’t balk at the chance to depict the destruction of famous landmarks as a selling point for big visual effects-laden blockbusters. After Independence Day became the biggest movie of 1996 by famously showing the destruction of such iconic buildings as the White House and Empire State Building, among others, many blockbuster films quickly followed suit, including the aforementioned Deep Impact and Armageddon.

Such depictions of destruction fell out of vogue for a while following 9/11. Then in 2009 the film G.I. Joe: The Rise of Cobra featured an action scene in which terrorists in Paris destroy the Eiffel Tower, indicating Hollywood was more or less back to business as usual.