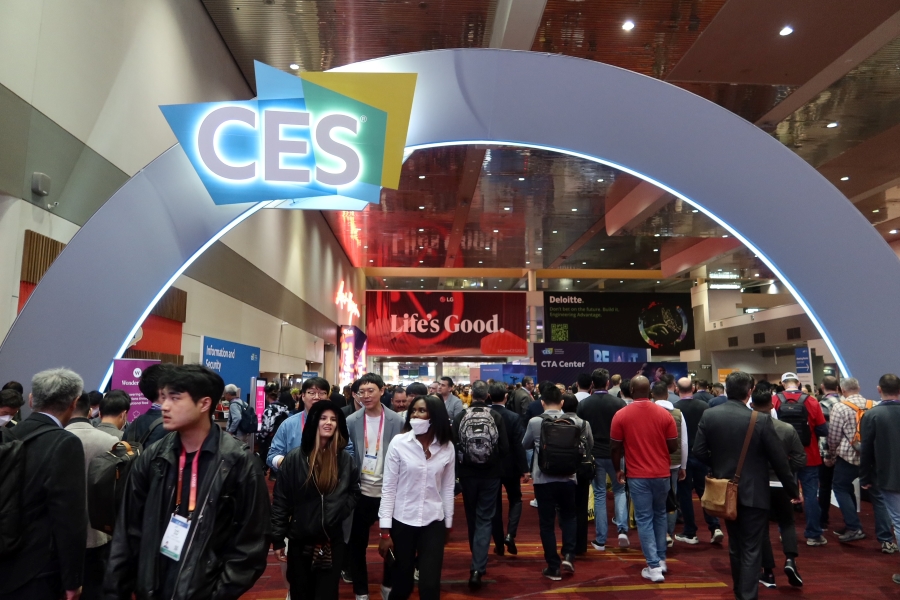 LAS VEGAS — Long lines, lots of handshakes and hardly any masks: It’s pretty much business as usual at CES 2023, which officially opened Jan. 5 at the Las Vegas Convention Center.

The show floor was packed throughout the day, and the social distancing signs and accommodations that were prevalent at last year’s show were conspicuously absent.

LG was back with its flowing video wall showing everything from tigers to whales, from oceans to spectacular sunsets.

Sony, Panasonic, Samsung and TCL also had enormous booths, showcasing everything from the latest TVs to new technologies in the worlds of gaming, health tech and smart everything. One of the centerpieces of the LG booth was “the world’s first wireless OLED TV,” while Sony trumpeted its video game properties and displayed a wealth of new PlayStation accessories, from wireless controllers to a new VR system.

Panasonic, in a twist, had a special display for new Technics turntables and CD players, both throwbacks to the 1980s when the Las Vegas confab was known as the Winter CES, as opposed to the Summer CES in Chicago.

Lines snaked through the show floor. Top draws were the immersive Knock at the Cabin (Universal Pictures) movie experience at the Canon booth, where various new technologies were demonstrated in the context of M. Night Shymalan’s latest movie; a parade of football greats, including Detroit Lions running back Barry Sanders, signing autographs and posing for photos at the TCL booth; and free skateboards being handed out by Element Case, a leader in premium phone cases and accessories. TCL was recently named an official partner of the NFL, which affords the Chinese electronics company access to the league’s massive fan base for its line of big (up to 98-inch) TV screens.

Commitments to sustainability were everywhere, including a huge wall at the LG booth outlining the company’s carbon-neutral objectives and a flashing screen in the Panasonic booth promoting green power generation and net zero C20 factories with which the company hopes to create “a world that’s greener, healthier and more equitable.”

Even Targus, known for its cases, promoted laptop bags and backpacks made from recycled plastic water bottles. The bottles are shredded for pellets, which are then converted and spun into yarn, which in turn is then threaded and died into fabric.

In tandem with the show floor opening, the Consumer Technology Association (CTA), which produces the annual CES, released its second International Innovation Scorecard, an assessment of policies and practices around the world that fuel tech innovation or stand in the way of progress.

“The 2023 Scorecard captures a surge in entrepreneurship since the last release in 2019, as innovators around the world harnessed advanced technologies to develop vaccines with incredible speed, deliver medical care across borders, create online tools for commerce and education, and navigate complex supply chain challenges,” said Gary Shapiro, president and CEO of the CTA. “This year’s Innovation Champions embrace policies that unleash innovation and empower diverse communities to bring new technologies to life and to market, improving the lives of millions.”

The Scorecard measures 40 indicators across 17 categories, including tax friendliness, environmental quality, trade policy, broadband access, and cybersecurity. The 2023 edition expanded to include nine additional countries, assessing a total of 70 nations spanning the globe, including all members of the EU and G20.