The Party, an award-winning comic drama about a gathering of friends, arrives on digital May 8 and on DVD and on demand May 22 from Lionsgate.

Directed by Sally Potter (Orlando, Ginger & Rosa), the film  follows an intimate gathering of friends that quickly spirals out of control on the heels of an unexpected announcement. The film stars Patricia Clarkson, Emily Mortimer, Cillian Murphy, Kristin Scott Thomas and Timothy Spall.

The Party won the Guild Film Prize and was nominated for the Golden Bear at the 2017 Berlin Film Festival. 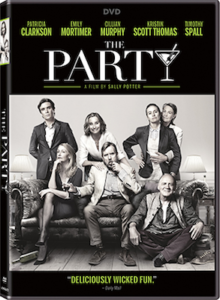