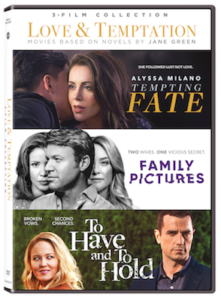 Lifetime’s Love & Temptation: 3-Film Collection will come out on DVD March 24 from Lionsgate.

Lifetime’s first steamy book-to-screen series from New York Times best-selling author Jane Green includes the movies Tempting Fate, Family Pictures and To Have and to Hold, three tales of forbidden lust, shocking secrets and desperate love. In Tempting Fate, Gabby (Milano) meets Matt, jeopardizing her marriage to Elliot, as what begins as a business opportunity develops into an emotional affair. In Family Pictures, Sylvie and Maggie are strangers living on opposite coasts with husbands that travel for work a lot, but when they befriend each other on their daughters’ college tour, they discover a shocking secret. In To Have and to Hold, Alice allows her husband to mode her into his ideal socialite wife.