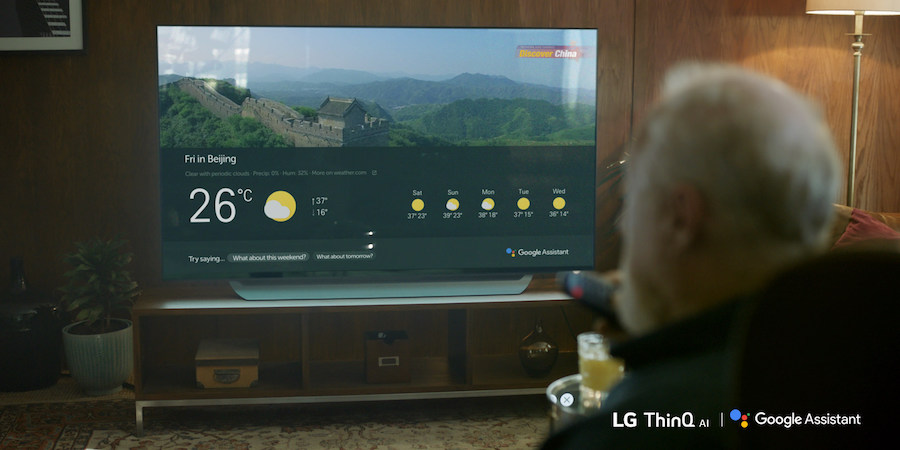 LG Electronics USA May 8 announced the launch of the Google Assistant on its 2018 AI TV line-up.

This includes both LG OLED TVs and LG Super UHD TVs with ThinQ AI, which will deliver AI features operated directly through the TV’s remote control with no additional hardware required, the company reported.

“With the Google Assistant, you can ask it to manage daily tasks, access information, control compatible smart home devices including lighting, appliances and much more,” an LG press release reads.

LG and Google are collaborating to develop a range of features and are working to expand consumer accessibility in multiple languages, the company announced. LG’s 2018 AI TVs can perform hundreds of voice commands utilizing the company’s own open smart platform as well as the built in Google Assistant. With LG’s ThinQ, users can immediately connect to external gaming consoles and soundbars, switch picture mode or turn the TV off at set times.

LG 2018 AI TVs can retrieve information or switch to a channel that offers the content requested by the viewer, according to the release. “Switch to Discovery channel” instantly connects users to information about future travel destinations. Users can learn more about their desired films by saying a character’s or actor’s name. They can tell the TV to “search for the soundtrack of this movie” or “turn off the TV when this program is over” without needing to schedule a time.

With the Google Assistant built in, LG’s 2018 AI TVs allows users to manage different tasks, find answers or control smart home devices, the LG release noted. Users can press and hold the mic button to ask for information such as the weather forecast, nearby local businesses, or check the score of a game without disturbing the viewing experience. Users can also display Google Photos and access devices such as robotic vacuum cleaners, thermostats, air purifiers and smart lighting.

“With the Google Assistant now available natively in 2018 LG AI TVs, LG has truly elevated the TV to a whole new level of AI adoption in the home,” said Tim Alessi, head of home entertainment product marketing at LG Electronics USA. “Beyond the unrivaled picture quality that LG TVs deliver, LG’s partnership with Google creates a true visual hub for information and connectivity in the home. LG has only begun to scratch the surface of what we will innovate in the AI ecosystem working collaboratively with cutting-edge, industry leading partners such as Google.”