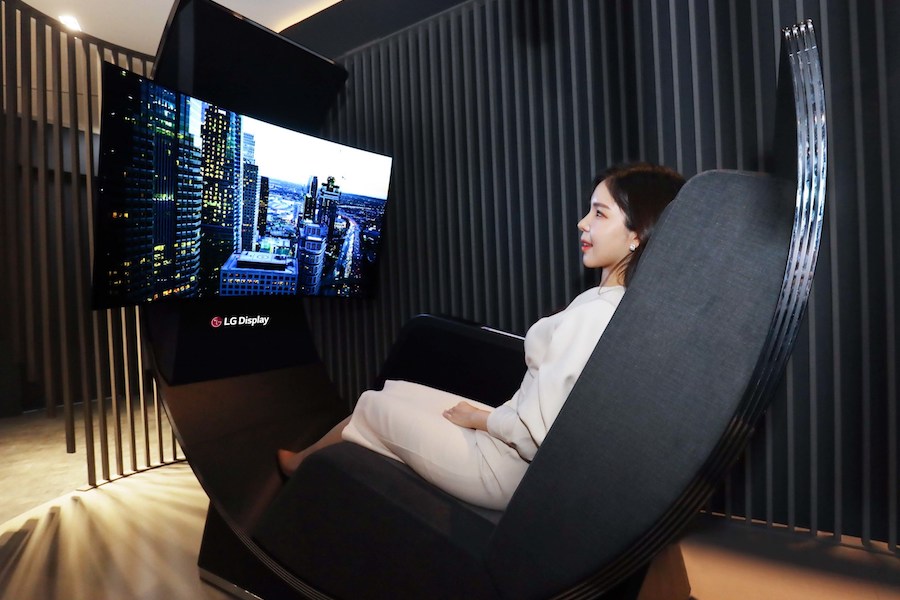 The Virtual Ride is an indoor stationary bicycle with three vertical 55-inch OLED displays in front of and above it. The advanced displays come together to form one large, curved, r-shaped display that gives users a view both forward and above. The display that bends to create the ceiling above the rider has a curvature radius that reaches 500R, or a radius of 500mm, the most among existing large displays, according to LG.

“The OLED displays provide unparalleled lifelike colors with their vivid picture quality to make you really feel like you are cycling outside in a forest or down the street of a European village,” according to an LG press release.

The Media Chair combines a 55-inch OLED TV display with a recliner. The screen boasts a curvature radius of 1,500R, the optimal angle for the user, as well as the company’s built-in sound technology Cinematic Sound OLED (CSO), which enables the display to vibrate to make its own sound without the use of external speakers, according to LG. The chair display’s pivot function allows the screen to rotate between vertical and horizontal orientations with a button on the display of the armrest. “This gives the user the unique opportunity to customize their immersive viewing experience thanks to the OLED technology to perfectly fit whatever content they want to watch,” according to the release.

The OLED display boasts tens of millions of self-emitting pixels to eliminate the need for a separate backlight, according to the release. It comes in various forms, such as bendable, foldable and rollable.

“We will continue to provide differentiated value to our customers through OLED’s infinite potential while also moving forward with integrating our business into diverse industries,”  Yeo Chun-ho, head of the business development division at LG Display, said in a statement.