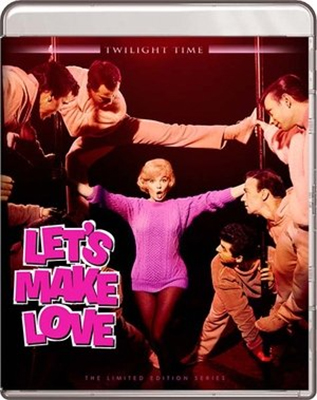 Justifiably taken seriously by then husband Arthur Miller but also by director John Huston, Marilyn Monroe was able to “go out on” that collaborative duo’s The Misfits (speaking in career terms, that is) — just as co-star Clark Gable’s did in service of that onetime critical-commercial flop whose fan base has grown in subsequent years. It was the kind of ambitiously dramatic undertaking that likely would have become more familiar in Monroe’s later career (and would have had to) had mass audiences permitted it — though, yes, she was making the fluffy Something’s Got to Give when she died.

But to backtrack: Five months before The Misfits’ release, in 1960 20th Century-Fox released Let’s Make Love, which makes it the last completed pure MM “vehicle” — though one mostly done because Fox demanded a movie to satisfy a minor little thing like Monroe’s contract, which the now freelancing superstar had been ignoring. A pop culture curiosity for sure, Love is worth seeing but not for the usual reasons: With even the vestiges of youth having disappeared from Monroe’s face, there’s a melancholy pall over the entire outing that’s hard to shake when you’re watching it. Thus, it’s at least somewhat memorable as a kind of prelude goodbye to the kind of screen outing that had made her a star before the real goodbye came a couple years later.

The great George Cukor was hired to be something of a Monroe shoulder amid the fashioning of an apparently much-altered Norman Krasna script, though as Julie Kirgo notes in her Twilight Time backgrounder for the company’s new Blu-ray Love release, the director said he just couldn’t get through to her. Though there’s nothing solid to go on here beyond viewer intuition, MM does seem a bit disengaged, while co-star Yves Montand — uncharacteristically stiff here, as he’d later be with Barbra Streisand in On a Clear Day You Can See Forever — struggled some with English in his first American film (though, as ever, he’s an agreeable presence). Basically a rack on which to hang a full array of hats, the script concerns an Old Money French billionaire secretly posing as an actor to lampoon himself in an off-Broadway satirical revue whose personnel isn’t aware that it has the real thing in its midst. Somewhere in all this, there’s a way to include 974 vocals delivered by Brit Frankie Vaughn, who must have studied at the Keefe Brasselle Institute of Tough-to-take belters. Take it, Frankie, and then say hi to Tony Newley on the way out.

Meanwhile, Monroe is the featured femme star who takes pity on one she perceives to be a struggling and mostly out-of-work performer, which naturally melts the heart of a guy to whom others automatically defer because he has so much green. Beyond looking tired, Monroe is the heaviest she ever was on screen, but as Kirgo suggests, it’s all relative; were the Monroe of this picture seated sans companion opposite most guys I know at a dinner party, their chins would still fall into the finger bowl. Her garb is, shall we say, a lot more revealing than anything Greer Garson wore the same year playing Eleanor Roosevelt in Sunrise at Campobello, and the Jack Cole choreography further pegs this as a Fox production through and through.

There’s a commercial gimmick here, and its gives Love something of an energy boost in hour two. Because Montand’s character is so out of his element as an entertainer — and about as natural on stage as John Wayne was playing Genghis Khan on screen — he hires a trio of “experts” to show him the show biz way. This provides the excuse to give us Milton Berle (as the joke expert) in 2.35:1 DeLuxe Color; it also gives us a near-miss (though missed opportunity is more like it) to see him teaching Wilfrid Hyde-White how to walk on he sides of his feet. You can almost hear Montand thinking to himself, “Talk about the wages of fear.”

Then it’s Bing Crosby — prototypical hat and pipe soldered to his face — possibly strolling over from the set of Fox’s High Time, figuring it would be easier to teach Montand than Fabian how to sing. For dancing, it’s Gene Kelly, and in more comfortable surroundings than those provided by the same year’s Inherit the Wind (at least he didn’t have to do his scenes here sweating under a ceiling fan). A potent added touch might have been John C. Holmes for instruction in Step No. 4, but the historical chronology was off and Fox shareholders would have likely balked.

Love was, for those who remember, the lead-in for a real-life Monroe-Montand fling, and it’s been noted that Montand looked a little like pre-Miller husband Joe DiMaggio. Somewhat surprisingly, the two don’t exhibit a whole lot of chemistry on screen, yet their characters are likable enough individually, which is just enough to carry something of a high-profile oddball whose Blu-ray rendering is more successful than not at fighting DeLuxe limitations of the period. (I’ve noticed that the very earliest color Scope movies from Fox — say, ’53 through ’57 — always look better than expected in high-def, but not so much the ones from later in the decade and early in the next). The picture was kind of a hit but just not a very big one — an indicator, perhaps, that ’50s taste was showing hints of waning as a new president (and Monroe fan, matter of fact) was about to take the reins.