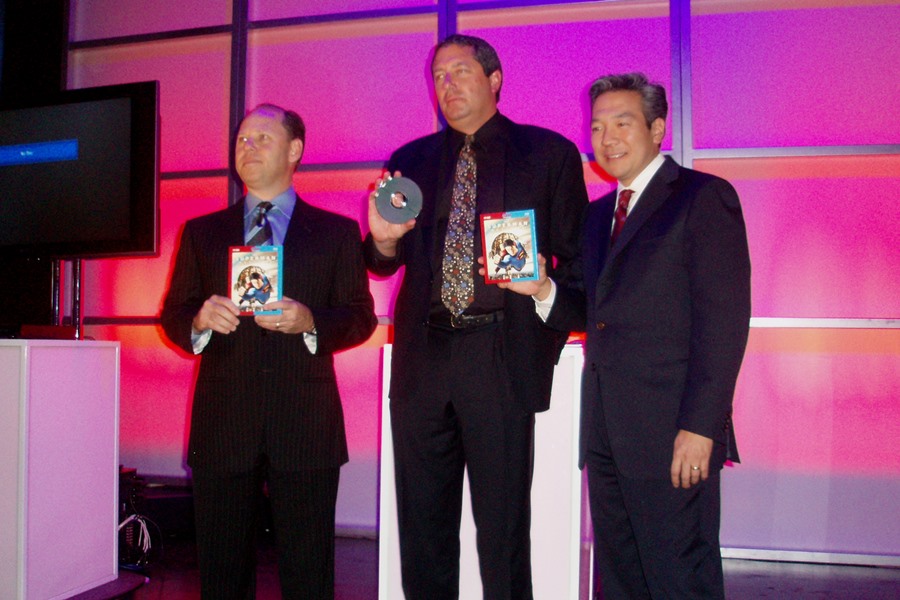 At the January 2007 CES, Warner Home Video unveiled a hybrid disc with Blu-ray Disc on one side and HD DVD on the other. Showing off the new product are (L-R) WHV executives Ron Sanders, Steve Nickerson and Kevin Tsujihara.

Ever since Media Play News launched in January 2018, our mission has been to look ahead and not only keep our readers up to date with the latest home entertainment news, trends and development, but also to anticipate what is to come.

That’s why we report so generously on research and data analysis that tries to make sense out of where we’re going.

And yet, from time to time, it’s healthy to take a look back. We did it in our April 2019 feature on the history of 20th Century Fox Home Entertainment just as the fabled studio was being swallowed up by Disney, and, more recently, in our two-part series on 25 years of digital entertainment, which began with the March 1997 U.S. launch of DVD.

Sometimes, things come full circle. Historical articles present us with lessons we can apply to future challenges or opportunities. As the great writer and philosopher George Santayana once said, “Those who cannot remember the past are condemned to repeat it.” In our history of digital entertainment, for example, the overriding takeaway is to never let the quest for short-term profits get in the way of long-term strategy.

In this month’s feature we take a look at 10 of the most notorious failures of the home entertainment era — and each one, I hope, has a lesson of some sort. In the early 1990s, hoping to get a jump on putting movies on a five-inch disc, Philips put a lot of time and money into developing the CD-i and Video CD. But both formats were half baked and never really caught on with the public; they were smaller and more convenient than the clunky videocassette, but the quality didn’t impress. Just a few years later, the DVD delivered the much-needed “wow” factor, underscoring the fact that it’s best not to rush things.

The bad timing curse hit again a decade and a half later with the emergence of Digital VHS, the videocassette’s last stand. Digital VHS promised true high-definition content, unlike the DVD, which had launched the year before, in 1997. But with everyone but Fox pushing the digital video disc and consumers salivating at the prospect of buying new movies three months after their theatrical debut instead of only being able to rent them on VHS, Digital VHS never even had a chance.

It could be argued that every new technology that comes along is a failed technology, since sooner or later everything becomes obsolete. But that’s not really true. VHS had a long, successful run and is what gave the home entertainment business its start. The LaserDisc allowed movie fans to buy and collect movies on an archival format long before DVD. And while DVD and Blu-ray Disc sales are a fraction of what they once were, both formats enjoyed remarkable success and are still being produced today.

The 10 “flops and follies” that are profiled in this month’s feature all had very limited lifespans, and were done in not by advancing technologies but, rather, by inherent flaws in either the product itself or in the marketing, the concept, the presentation or the timing.