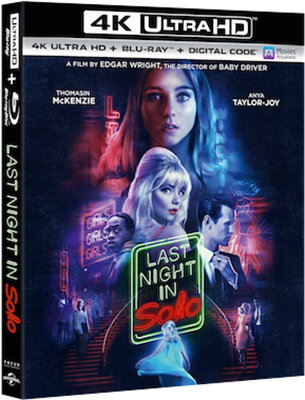 Viewers heading into director Edgar Wright’s Last Night in Soho expecting to soak in more of his unique style and penchant for classic rock might be in for a bit of a shock when he veers a seemingly mundane story about a girl struggling with college life into an intense psychological horror film.

Eloise (Thomasin McKenzie) heads to London to pursue her dreams of becoming a fashion designer. New to the big city, she finds comfort in her love of the music and aesthetics of the 1960s — imparted unto her by her late mother. After a personality clash with her roommate, she decides to rent a room from an elderly woman (Diana Rigg) whose rustic style and strict moral code seem to suit Eloise just fine.

However, Eloise soon begins to have vivid dreams in which she lives in the 1960s as an aspiring singer named Sandie (Anya Taylor-Joy), whose own ambitions are quickly shattered when she’s pimped out by her potential manager (Matt Smith) to fulfill the sexual desires of potential benefactors.

When Eloise encounters landmarks from her dreams in real life, she begins to suspect she’s experiencing visions of events that really happened, and uncovering the mystery of what happened to Sandie consumes her life — even as those around her suspect she may be falling victim to the same mental illnesses that eventually led her mother to commit suicide.

The film starts innocently enough, with Eloise being something of a stand-in for Wright in terms of wanting to live in an idyllic version of the 1960s. Eloise’s seeming descent into the madness of reliving the tragedy of Sandie, however, makes for a very disturbing journey when all is said and done.

The Blu-ray offers some rather extensive extras, including a number of in-depth behind-the-scenes featurettes. The 10-minute “Meet Eloise” focuses on McKenzie’s character and performance, while the nine-minute “Dreaming of Sandie” focuses on the performances of Taylor-Joy and Smith. The eight-and-a-half-minute “On the Streets of Soho” delves into filming on location in the real Soho neighborhood of London, while the 12-and-a-half-minute “Smoke and Mirrors” and the 11-minute “Time Traveling” focus on the film’s visual style, visual effects and re-creating the vibrant energy of the 1960s.

Also included are four animatic versions of sequences, running 13 minutes, plus hair and makeup tests, lighting and VFX tests, and some interesting footage of the rehearsal and filming of one of the film’s key dance sequences.

Viewers should also enjoy the two detailed commentary tracks, one with Wright and co-writer Kristy Wilson-Carnes, which is focused more on story development and the ideas that influenced the film, and a second with Wright alongside editor Paul Machliss and composer Steve Price, which offers more technical details.

In addition, there are six deleted scenes that run a total of just over nine minutes.

Rounding out the set are some of the film’s trailers and a five-minute music video of Taylor-Joy singing a slow-tempo version of the 1964 Petula Clark song “Downtown.”