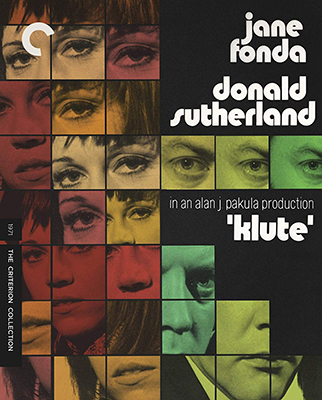 Released in relatively stealth fashion during a unforgettable movie summer in 1971 that put and puts the last 10 (at least) to shame, Alan J. Pakula’s Klute is a psychological drama wrapped in thriller/mystery trappings rather than a thriller/mystery per se — which possibly resulted in its being underrated at the time. Don’t get me wrong: Almost everyone save Jane Fonda bashers thought it some degree of good or better. But speaking for myself and not in isolation, it paled somewhat next to the concurrently released McCabe and Mrs. Miller, Carnal Knowledge and Walkabout (and let’s not forget that Two-Lane Blacktop is pretty close to a deity to the carburetor set and/or blackbelt cultists).

Blasting out of the gate with a new 4K remastering of Gordon Willis’s trademark anti-solar cinematography, Criterion’s new Klute release is one of the best-produced Blu-rays I’ve ever seen (Susan Arosteguy). And its combined package of nary-a-dud bonus extras now pounds it into me how unusual this film was — though credit as well half-a-century of the Women’s Movement, which was more or less in its torch-lighting phase around the time Klute came out, especially in and around where I had the good historical fortune to be: NYU. Of course, it always had what seems even more impressive today: an Oscar-winning Fonda performance that is among the significant ones of the modern screen era.

Criterion always seems to know what kind of supplemental material we want to see and, equally important, how or where to get them — so we get two remarkable Fonda interviews, conducted decades apart, that artfully operate in tandem here. The first was when she was young, pregnant and amid a personal political controversy (“Hanoi Jane”) that has abated only a sliver to this day. The other sit-down is a recent one, conducted by Illeana Douglas specifically for this release, in which Fonda (who is really smart regardless of where you stand on her politics, which were mostly way ahead of their time) talks about what she went through to research the role. And how she wanted to bolt the project on the eve of shooting because weeks spent with real-deal parties had convinced her that no one would accept her as a call girl.

This is what her “Brie” character is and a New York one as well, though she’s moved from more fashionable clientele and digs in a better part of town to something a few rungs down — she’s by no means a street person, or barely better, which is what some of her old colleagues have become. This is the New York before Giuliani turned it into Disney World (no value judgments here; I like Disney World) when “litter” was a cottage industry and even on the Upper West Side where I lived, I could see a guy urinating in the street late at night as I came home to my apartment after a double feature at the New Yorker or Thalia rep movie houses, which all the NYU film students regarded as second homes. Into this world comes the title small-town cop (Donald Sutherland) hired to investigate the year-long disappearance of a friend and possible onetime Brie client. Hers is not a profession, though, where one remembers customer physical descriptions, even of the ones who beat her up.

There’s some evidence that the missing man is one who did just that, yet this kind of violence is or was against his character, depending on whether he’s now still alive. Beyond this, someone has been recently barraging Fonda with frightening phone calls (no caller I.D. in this era, folks), the kind where the caller breathes into the receiver like an asthma victim. Thus, Sutherland/Klute — whose backstory isn’t defined, which in this rare case, may be to the dramatic good — becomes both a sleuth and a bodyguard as the two odd acquaintances retrace her old haunts in an attempt to follow up on scanty hints. One of these involves a former pimp (compared to many, “polished”) played by Roy Scheider, about four months before he broke through with an eventually Oscar-nominated performance in The French Connection.

A major player in the movie is one john’s sinister-sounding collection of portable tape recordings of Brie/Fonda on the job, a techno side issue that became dramatically cutting-edge for its day (three years, even, before Coppola’s The Conversation). This eerie invasion of privacy subtext — and the participation of cinematographer of Willis on all three films — made Klute the first of Pakula’s oft-termed paranoia trilogy, preceding The Parallax View and All the President’s Men. (Parallax is nowhere to be found on Blu-ray because its rights controller is hapless Paramount, who’d prefer to bring out Grease XLVII if it could.) This was only Pakula’s second feature after a fairly distinguished producing career, and though Willis had already shot at least two worthy-plus commercial flops since his debut the year before, Klute was his first wave-maker. Visually and audibly (the picture has great mono sound and Michael Small scoring), the print caliber here is comparable to what might have been shown at the first critics’ screening in the Warner screening room, 1971.

What makes the movie (we know the mystery with an hour to go) is the manner in which it takes dramatically risky time to examine Brie’s very confused psyche. It’s divulged not just by her actions but by monologues to her psychiatrist — something we didn’t see much in major studio cop movies of the day (see Clint Eastwood’s thematic fourth cousin Coogan’s Bluff as a reference point). This is a person who’s totally confident in her trade where she controls the situation but an emotional shambles outside the bedroom — especially in actress/modeling auditions that end in rejection, even though from the evidence we see, she ought to be garnering more respect.

This is a woman who likes to needle and even ridicule cop Klute, who responds negatively just once. But he gets under her skin, and she sometimes feels an extremely cautious emotional attachment. In off hours, she ditches the party scene and curls up in bed with a hardback book — not the best choice, but this a crowd where you don’t see much reading oaf any kind; she’s stylish about her clothes but can’t keep the rubble off the floor of her apartment. Ultimately, all this is much closer to what the movie is really about, which is a major reason it has aged so well.

Michael Chapman was the camera operator here (I didn’t know that), and he supervised the transfer. Vanity Fair’s Amy Fine Collins gives the full rundown on the film’s fashions and Brie’s character-enhancing accoutrements, and delivers a massive amount of revelatory info seemingly off the top of her head. Pakula gets his day via a documentary that includes Annette Insdorf and Steven Soderbergh just for starters — and there’s a half-hour of the director on a Dick Cavett show right after his reunion with Fonda on Comes a Horseman (or “How To Look Fab Out on the Trail in Jeans and No Makeup”). Mark Harris wrote the essay (you don’t get any classier than that), and even the thrown-in promotional featurette that Warner did at the time is pretty good. (Where did these play? They were too long for a TV spot, and I never saw one in a theater — only several in 16mm years after the fact.)

Pakula had a much more scintillating visual style than his ex-partner Mulligan did, though I suppose that having Willis as cinematographer (he shot five of the 16 Pakula features) could have turned Lesley Selander into an auteur. Before his wretchedly flukish 1998 death on the Long Island Expressway, Pakula definitely had his share of bombs — several of which I’d like to see again for reevaluation. But he had a highly praised track record with actresses (Fonda, Meryl Streep, Maggie Smith, Liza Minnelli), which is noted on one or more of the bonus extras. Of course, with All the President’s Men (by far my favorite movie of his career), he didn’t do too shabbily with male actors, either.