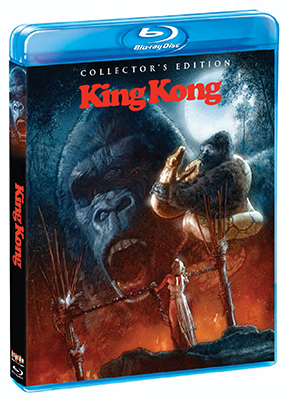 As cinema in the 1970s turned toward gritty realism and bold, thematic filmmaking, producer Dino De Laurentiis decided to stage a remake of the 1933 classic King Kong, updating the story with a contemporary setting and modern visual effects.

The original Kong had famously used stop-motion animation for the giant ape, blended into the live-action sequences to depict an expedition to a mysterious island in the Pacific Ocean, where the crew encounters Kong, who becomes infatuated with the only woman in the group. Kong is captured and brought to America to be put on display, but quickly escapes and rampages through New York, finding the blonde from the island and climbing with her to the top of a skyscraper.

In the 1933 version, it was a film crew seeking exotic locations that discovers Kong, who winds up climbing the just-completed Empire State Building at the end.

For the update, director John Guillermin and screenwriter Lorenzo Semple Jr., who was best known for developing the 1960s “Batman” TV series, played into current events by making the expedition about an oil company looking for resources to fight the energy crisis. The basic story would play out much the same way, with Kong at the end scaling the Twin Towers of the World Trade Center, which had just been built in the 1970s.

A young Jeff Bridges would play a primatologist and photographer interested in investigating rumors about the island. And the blonde love interest would be played by Jessica Lange, who gives an extremely sexy turn in her screen debut.

The visual effects would be a mix of green-screen composites, rear projection and makeup effects whiz Rick Baker in an ape costume, with rather obvious giant mechanical ape hands for close-ups when the ape is holding Lange.

While praised in their day, the effects are rather dodgy by today’s standards, and the problems in scaling are rather obvious.

The visual effects team even constructed a life-size animatronic Kong, but it didn’t work very well and only appears in a handful of shots (it’s most visible in the wide shot of the scene in which Kong is unveiled to the crowd in New York wearing a crown).

Still, the visuals speak to the ambitious nature of the project, which had a lot more luck in the gorgeous cinematography of the island’s beaches and jungles before Kong shows up. This is an unmistakably ’70s picture, and the luscious romantic score by John Barry further cements its identity as a production of its time.

Notably, when Peter Jackson did his own remake for Universal in 2005, he maintained the characters and settings of the original version and made it a period piece set in the 1930s. Interestingly enough, 2017’s Kong: Skull Island, which is one of the the precursors to Godzilla vs. Kong and as such is essentially the first half of the traditional Kong story, showcasing his discovery on the island but not his capture or exploitation in America, is also a period piece, set in the 1970s.

Shout! Factory’s new two-disc Blu-ray presents two versions of the 1976 version. First is the theatrical cut that runs about two hours 14 minutes and features a restored stereo audio track in addition to the 5.1 DTS-HD track. The film looks great, though some scenes tend to be grainier than others due to the different types of film stocks used at the time.

The theatrical cut disc also includes an informative commentary from film historian Ray Morton, author of King Kong: The History of a Movie Icon. While he does comment on specific scenes from time to time, his presentation reads more like a prepared essay about the making of the film and its context within the overall legacy of the Kong character.

The disc also includes a gallery of marketing images, and a collection of trailers, TV spots and radio ads.

The second disc contains the three-hour TV broadcast version of the movie, in which 45 minutes of deleted scenes have been added back in. This version has been reassembled using 2K scans from the internegative so it can be shown in high-definition. TV standards from the 1970s and 1980s would have only required a lower-resolution workprint for broadcast. The TV version isn’t presented as a single movie, but rather in the two parts that the network would have shown over a two-night span, with the recap of night one that led off the second part intact. While the option for a single three-hour presentation would have been welcome, it’s still nice to have the extended cut as a viewing option in better quality than from someone’s VHS of taping it when it aired.

This disc also includes a 2016 panel discussion of the film from a 40th anniversary screening conducted at the Aero Theater, featuring some of the same filmmakers who are interviewed on the first disc.