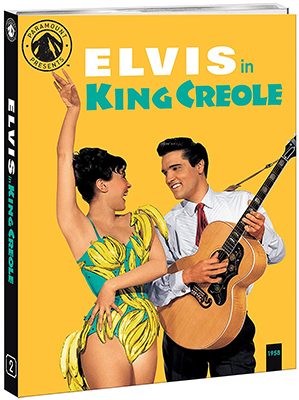 Well known to even cursory fans as Elvis Presley’s fourth and final film before Uncle Sam got him — and also, in the opinion of many, his best film — 1958’s King Creole was, like three of his four pre-army screen outings, shot in black-and-white. But there was nothing stingy about the production, and the New Orleans locales that producer Hal Wallis sprung for add immeasurably to the ambience right from the opening, synching beautifully with the studio-shot material that makes up the bulk of the drama. A lot of writers claim that KC is in VistaVision as you’d expect a Paramount realease of that time to be, but neither posters nor the on-screen credits say this, nor does it look like VistaVision to my eyes. It does, though, boast a first-rate cinematographer, Russell Harlan (Red River and To Kill a Mockingbird are two of many shot by him).

One of several seemingly endless projects intended for James Dean and taken over by other actors upon his death, Elvis’s character was changed to a busboy-turned-nightclub-singer caught between competing owners and two very different women. Of the latter, Carolyn Jones — heavily into that “kookie” phase that defined her entire career — is a bag of neuroses as mistress to the drunken nasty one of the two club rivals (Walter Matthau in one of the best of his early movie roles). The other woman is a dreamboat “nice girl” played by Dolores Hart, still my absolute favorite of that era’s newcomers, lover of porcelain beauty that I am. Working the counter at a local five-and-dime, she seems surprisingly OK with wanting to date Elvis, even though she’s the one employee who picks up on the fact that his singing-troubadour stroll through the store for the customer’s enjoyment is in reality a planned distraction so that his so-called colleagues ran rifle the joint.

Ahhhhhh, Sister Dolores, who is what Hart became after leaving Hollywood to become a nun in the early ’60s, but that’s for another time. Other than to note that this was the second time she’d performed heart-melting labors in an Elvis pic, following the previous year’s Loving You (which, by the way, is in VistaVision and badly needs a restoration.)

Elvis has, as they used to say, “fallen in with a bad lot” — partly in response to his proclivity for being forbidden from graduating from high school (this time, he pops a guy on school grounds before the very last day of classes). And partly in response to the lifelong wimp-dom of his pharmacist father (Dean Jagger), which was exacerbated by the death of the Elvis character’s mother, which led to the loss of the old man’s pharmacy and his worsening life reality of taking the worst kind of guff from everyone. (Including his new boss, something that Elvis covertly witnesses. This is after dad preaches unyielding adherence to the idea of graduation from school in lieu of the much bigger bucks his son can make headlining as a singer. Elvis sees how far that got him.

Of course, he’s hardly a headliner right off the bat and has to take patronizing guff himself of the kind busboys sometimes endure — until, in standard showbiz movie fashion, Matthau tries to humiliate him by asking him to sing for the customers, whereupon he’s a smash. At this point, what has been a straight drama becomes a drama with lots of music — too much for my taste, given that the score has its share of clunkers. Oddly, the tune that RCA Victor elected to release as an RCA Victor single — “Hard Headed Woman” (b/w “Don’t Leave Me Now”) is totally thrown away, though it went to No. 1, as did the soundtrack LP. Of course, this isn’t to say that winners don’t abound as well, including the title tune, also “Trouble” (which he reprised to kick off his 1968 comeback TV special), and “As Long As I Have You,” one his best ballads ever, which contributes to one of the most emotionally satisfying movie wrap-ups I know.

Man, no wonder this is Elvis’ longest picture because his sister is falling for Matthau’s owner rival (Paul Stewart) despite a 20-year age difference (I love it that no one in those days, morals police or otherwise, gave a damn). To say nothing of mistress Jones going off the rails increasingly by minute, Matthau now trying to pimp her out, a needless production number by Liliane Montevecci, whose big-screen appeal I never got, and Elvis’s punk buddies (led by a very young-looking Vic Morrow) back in the alley with weaponized broken bottles trying to reengage him in crime. Maybe this is an argument for staying in school, but the money is suddenly good.

Directing this is veteran onetime superstar Michael Curtiz, whose career kind of fell apart after the collapse of the studio system, but he did manage White Christmas, this semi-ringer and my very soft spot for swan song The Comancheros, but by that time Curtiz was dying, and star John Wayne reportedly took over as director. Elvis responded with enthusiasm to having a name filmmaker, and both the star’s smirkily amused reactions to Jones’s machinations and reciprocated affection are credible. As natural as Elvis’s raw talent was, I doubt if frequent director and career-long albatross Norman Taurog could have gotten nearly as much out of him.

For the launch of “Paramount Presents,” its sparse so-called Blu-ray “line,” Paramount has employed my old bud Leonard Maltin to give about a seven-minute overview — a pro job, obviously, but hardly an example of hoopla. He opines himself that this is Elvis’ best movie, but by a sliver-and-a-half, I think I’ll go with the second movie he made back from the army (Don Siegel’s Flaming Star), which was a commercial flop but tighter.

King Creole was Elvis’s only predominantly serious drama to catch on and sent him off to the army with great screen promise that Colonel Parker ultimately wouldn’t let him fulfill upon his return.