With growing competition in the streaming space, Netflix is increasing its program budget in this and the coming years, according to Kagan, the media research unit of S&P Global Market Intelligence.

For 2021, Kagan forecasts the company could amortize about $13.6 billion in total content costs, including $5.21 billion positioned for originals.

The launch of new subscription video-on-demand players, such as The Walt Disney Co.’s Disney+, AT&T Inc.’s HBO Max, Comcast Corp.’s Peacock and ViacomCBS Inc.’s Paramount+, resulted in swaths of content being held back as each looks to populate their own services, Kagan noted. Kagan expects that distributors will continue to reserve rights for their own SVOD services, more so from territories where they are soon to launch. However, some rights deals have lengthy contracts and would either require buying out the contract or waiting for it to expire. 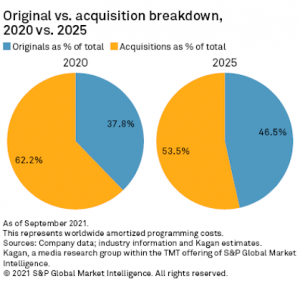 Netflix has prepared for this trend since entering the originals market in 2012 as it expected studios would eventually hold back programming, according to Kagan. By 2014, about 6.8% of spend came from new orders and increased to about 37.8% of the budget in 2020. As the service focuses more on new content, Kagan expects that percentage to grow closer to 50% by 2025.

Total amortized spending may increase to more than $18.92 billion in 2025. Over that period, Kagan predicts that more focus will be put on originals, with growth at 14% annually, while the acquisition CAGR could be 4.8%.

The company had a significant amount of content ready at the beginning of the pandemic, but production delays affected the latter half of 2020 and persisted into early 2021, according to Kagan. Netflix continues to concentrate on scripted series and movies with the highly anticipated return of “The Witcher” (season two), “Stranger Things” (season four) and the movie Red Notice coming in the next several months.

The streamer has placed more emphasis on unscripted programming as series nearly doubled in 2020, according to Kagan. While this was due in part to the production shutdowns on the scripted side, reality has given strong results, including “Too Hot to Handle” with Netflix ordering two additional seasons and producing the format in other countries, according to Kagan.

On the acquisition side, theater closures left a plethora of films on the table for streamers, with Netflix snagging The Trial of the Chicago 7 and Enola Holmes. Netflix has several premium network output deals in place. With the exception of Disney, the majority of studio animated films land at Netflix during that window. Netflix will also take over the Sony output deal from Starz beginning with films released next year, Kagan noted. 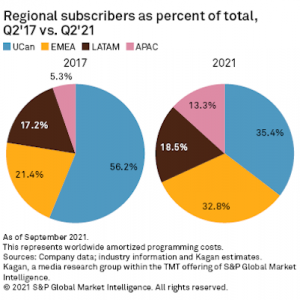 Spending on local content has been a strategy for the company in recent years as more subscribers come from non-U.S. markets. Top titles include Spain’s “Money Heist,” Germany’s “Dark” and South Korea’s “Kingdom.”

Subscriber data indicates some payoff in the localization focus. Second-quarter statistics show that subscribers from the United States and Canada made up about 56.2% of total subscribers in 2017 compared to just 35.4% in June 2021. 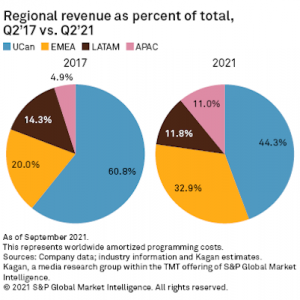 The U.S. and Canada delivered 60.8% of revenues in 2017 compared to 44.3% in second-quarter 2021. This points to the strong pricing in the United States and Canada — including frequent price bumps — which can also be seen in much of Europe, the Middle East and Africa versus lower pricing in Latin America and Asia-Pacific, according to Kagan.