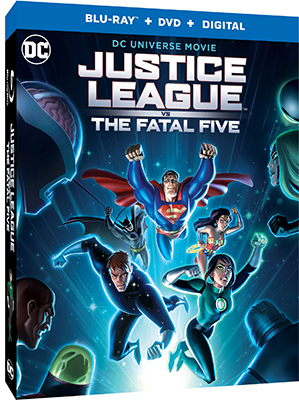 At first glance, Justice League vs. The Fatal Five would seem to be a return to the world of the “Justice League Unlimited” animated series, with the voice casting of Kevin Conroy, Susan Eisenberg and George Newbern as Batman, Wonder Woman and Superman respectively.

The film’s aesthetic is based on the series and even the music returns to some of the iconic themes from the show.

The movie’s place in canon is the subject of a discussion in the commentary track, which acknowledges that some continuity issues with the series would have to be dealt with, but that enough time has passed since the final episode to allow for some adjustments if viewers want to make that connection. The decision to use the “JLU” style mostly came down to budgetary constraints, as they didn’t have time to create a new style to differentiate the film from DC Universe animated movie series that share their own continuity, of which this is not a part. Sharp-eyed viewers may notice the movie borrows design elements from other previous DC animated works, such as the “Green Lantern” animated series.

Whatever the case, the movie isn’t written to depend on a connection with a previous work, and is certainly entertaining enough to stand on its own. The movie offers some nice action and a few unexpected surprises, both in terms of references to comic book lore and some genuine laughs stemming from the characters and dialogue. It is a bit harder edge than the “JLU” series as well.

The story involves the 31st century super team The Legion of Super-Heroes battling three members of the villainous Fatal Five, who want to steal a time machine to go to the 21st century to free the other two members of their team from a prison.

The villains end up making it past the Legion’s defenses, but not before Star Boy (Elyes Gabel) hitches a ride back with them in an effort to stop them.

The wrinkle to Star Boy’s plan is that he requires medicine to maintain his mental stability, and without it he comes across as unhinged to the authorities, who put him in Arkham Asylum.

However, the Justice League uncovers his true identity and recruits him in their effort to stop the Five, whose plan is to kidnap a Green Lantern so they can access the prison to free the two trapped members of their team.

The Green Lantern in this case is Jessica Cruz (Diane Guerrero), who is dealing with anxiety over the stress of being a superhero.

The common bond of mental disorder unites Cruz and Star Boy, as they must learn to overcome their illnesses to become the heroes they need to be.

An eight-minute “Battling the Invisible Menace” featurette further explores the topic of mental illness and its role in the story.

Another featurette, the 15-minute “Unity of a Hero,” focuses on the diversity of characters depicted in the film.

The disc also includes a couple of episodes from previous DC animated series with similar storylines, and a nine-minute preview of the next DC Universe animated movie, Hush, an adaptation of a Batman comic book storyline.