Jurassic World: Fallen Kingdom, the latest installment in the celebrated “Jurassic Park” franchise, will be released for home audiences as a digital purchase (and through the digital movie app Movies Anywhere) Sept. 4 from Universal Pictures Home Entertainment.

Two weeks later, on Sept. 18, the film — with a domestic gross of just under $385 million, the fourth-biggest theatrical hit of the year — will be issued on DVD, Blu-ray Disc, 4K Ultra HD Blu-ray, 3D Blu-ray and on demand. 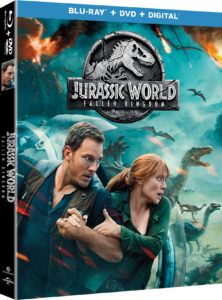 All home versions of Jurassic World: Fallen Kingdom come with more than an hour of bonus content, including Chris Pratt’s behind-the-scenes “Jurassic Journals; an inside look at the genetically designed Indoraptor; and a behind-the-scenes featurette with Jeff Goldblum, an original cast member from the first Jurassic Park movie, which was released theatrically in 1993. He also appeared in the 1997 sequel The Lost World: Jurassic Park, and this year reprised his role as Dr. Ian Malcolm in Jurassic World: Fallen Kingdom.

The “Jurassic Park” franchise is now one of the top grossing franchises of all-time, with a worldwide box office gross of more than $4.7 billion.

Jurassic World: Fallen Kingdom was directed by J.A. Bayona (The Impossible, The Orphanage) and executive-produced by Steven Spielberg and Colin Trevorrow. The film follows Owen Grady (Pratt) and Claire Dearing (Howard) returning to Isla Nublar three years after the destruction of the Jurassic World theme park to rescue any remaining dinosaurs on the island from a catastrophic volcano that threatens to leave dinosaurs extinct once again.

Grady is driven to save his lead raptor, Blue, while Dearing makes it her mission to preserve the creatures she has grown to respect. When the lava begins to rain down, they soon discover terrifying new breeds of ferocious dinosaurs along with a conspiracy that could threaten the entire world.

All five “Jurassic” films also will be available in a five-movie collection on Sept. 18 on DVD, Blu-Disc and 4K Ultra HD Blu-ray.

The Blu-ray Disc, 4K Ultra HD Blu-ray and digital purchase come with several exclusive bonus featurettes, including “The Kingdom Evolves,” in which filmmakers discuss how the second chapter in the “Jurassic World” trilogy pushes the franchise in a new direction; “Return to Hawaii,” in which cast and crew discuss shooting the film in Hawaii; “Island Action,” a behind-the-scenes look at the bunker scene and runaway gyrosphere sequence; “Aboard the Arcadia,” in which cast and crew talk about working with the animatronic dinosaurs; and “Start the Bidding,” a behind-the-scenes look at the auction scene.

Jurassic World: Fallen Kingdom will be available on 4K Ultra HD in a combo pack which includes an 4K Ultra HD Blu-ray, a Blu-ray Disc and a digital copy.

View an exclusive behind-the-scenes clip from the new bonus feature “On Set with Chris and Bryce” here: