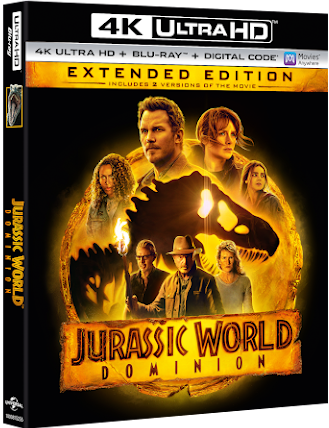 The supposedly final ‘Jurassic’ movie arrives home with an extended version that adds 14 minutes back into a film that looks great but is something of a convoluted mess.

The previous film, 2018’s Jurassic World: Fallen Kingdom, had ended with the prospect of the cloned dinosaurs first introduced way back in 1993’s Jurassic Park finally making their way to civilization (though this was also teased at the end of 2001’s Jurassic Park III and subsequently ignored).

Director Colin Trevorrow, who kicked off this sequel trilogy with Jurassic World in 2015, returns to direct the third installment after missing out on the middle chapter because he was slated to direct Star Wars: Episode IX (which he subsequently left).

There are actually a lot of similarities between the “Jurassic World” trilogy and the “Star Wars” sequel trilogy. Both started by hearkening back to the original with directors who would skip the second movie but return for the third (J.J. Abrams in the case of “Star Wars”). And both would offer concluding chapters that try to tie in all the previous movies with the return of a villain, a storyline that seemingly comes out of nowhere, and the retconning of the origins of a key female character.

In Dominion, we are introduced to a world that now has dinosaurs living in it and a society debating what to do with them.

The film’s plot, on the other hand, has to do with genetically engineered locusts that are eating all the crops from the farms that didn’t buy seed from the corporation that created the locusts.

Oh, and there’s dinosaurs too. They’re mostly just obstacles to the characters infiltrating the corporation to prove malfeasance.

That corporation is BioSyn, whose CEO, Lewis Dodgson, appeared in the original Jurassic Park trying to steal the genetic secrets of dinosaur cloning (and inadvertently triggered the dinosaurs-run-amok tropes that continued into each subsequent film in the franchise). He’s played by Campbell Scott here, replacing the original actor.

In addition to creating illegal prehistoric super-locusts, BioSyn has also set up a dinosaur preserve in the middle of Europe, providing for a convenient locale for the main characters to have to run from hungry dinosaurs through forests and caves, just like in all the other movies.

To stir the pot a bit more, the film brings back the trio of Jeff Goldblum, Laura Dern and Sam Neill from the original “Jurassic” trilogy to team up with the new trilogy’s core characters played by Chris Pratt and Bryce Dallas Howard (Goldblum appeared in Fallen Kingdom but didn’t interact with anyone important).

Pratt and Howard’s characters end up at the BioSyn sanctuary searching for their adoptive daughter, the clone girl from the previous film who is kidnapped by BioSyn hoping to use her genome to create a cure for the locusts or something.

Some characters meet their poetic ends, some get redemption, and there are a few fleeting moments of actually effective nostalgia involving the original trio.

Oh, and did I mention all the dinosaurs trying to eat everyone?

The extended cut adds a lot of nifty little character moments back into the film, but the most notable addition is the prologue set 65 million years ago that depicts a battle between a Tyrannosaurus Rex and a Giganotosaurus that will carry on into modern times after they are cloned. It’s a cute sequence and well rendered, but there are a few obvious problems with it. First is the fact that all the dinosaurs look like their clone versions, when it’s said in the first Jurassic World that the cloned dinosaurs probably don’t look much like the original versions since their DNA was completed using modern animals, and genetically manipulated on top of that.

Also, the T-Rex and Giganotosaurus lived 30 million years apart and half a world away from each other, but whatever.

In addition to the extended and theatrical cuts, the Blu-ray also includes the short film Battle at Big Rock, about a family on a camping trip that gets attacked by dinosaurs. It was originally released in 2019 as a prelude to the idea of dinosaurs in the real world (and notably features zero super-locusts).

Also included are a six-minute featurette about the film’s new visual effects techniques, and a 47-minute behind-the-scenes documentary. Some digital retailers such as Vudu have this presented as its component parts individually — ranging from a look at the return of the original cast, to some of the action sequences, to using animatronics and puppetry for some of the dinosaurs, to wrapping up the saga.