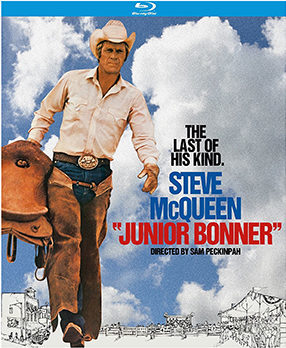 To hear a welcome barrage of familiar Sam Peckinpah experts accurately tell it as part of Kino’s ample-plus Blu-ray bonus features, not many moviegoers were waiting for Junior Bonner in 1972 at a time when lead Steve McQueen (coming off his Le Mans debacle) needed a hit. I was an exception — and in one of the more folkloric stories in my personal movie-going history, drove 75 Ohio miles (each way) from Columbus to Dayton to see it in an early booking, only to discover that its too-brief engagement had wrapped the previous day. Something must have been in the water (or, given my peer group’s age at the time, firewater): Not long before or after this, a close friend of mine tried to impress a woman by driving the two of them from Columbus to Cleveland to see if they could score tickets for the day’s Browns-Giants game — rudely unaware that the Browns were playing in New York that day.

Both of us could have used the Internet, and Junior Bonner could have used an ad campaign that sold its maker’s most gentle movie as a family drama and not another of the rodeo sagas that were flooding the market at that time. McQueen, Robert Preston and Ida Lupino are three of my favorite screen performers ever, and here they are as a wayward son and his estranged parents, with Joe Don Baker (as the more responsible “Curly” Bonner) as a brother trying to make a go with a (so far) lucrative Prescott, Ariz., real estate development. What more could anyone want — and this at a time when The Wild Bunch, The Ballad of Cable Hogue and Straw Dogs in quick succession had established Peckinpah as possibly the most dazzling U.S. director then going — though rebuttals were intelligently advanced by disciples of Robert Altman and also Mike Nichols, who’d come back big-time from his Catch-22 stumble with the oddly not-on-Blu-ray Carnal Knowledge).

For a movie that bombed at the box office during its release, a lot of people revere Junior Bonner — including Ali MacGraw (also a part of this Blu-ray’s bonus features), whose The Getaway with McQueen opened four months after JB to become what I am virtually certain was Peckinpah’s biggest commercial hit. (She also did Convoy, the director’s penultimate film.) MacGraw is one of many who’ve advanced, or at least implied, the sentiment that Peckinpah’s more characteristic big-screen bloodbaths only told half the story; in other words, where were all you clowns who put Sam the Man down as reprehensible when the still underseen Cable Hogue and then this unpretentious beauty were showing an entirely different side?

Via a lovingly constructed Jeb Rosebrook screenplay that Peckinpah fleshes out with a couple of show-stopping extended set pieces, Junior (McQueen) returns to his hometown to compete in a contest that necessitates his doing well in front of parents and old acquaintances, even though he’s been banged up from getting bucked and is otherwise no longer the competitor he used to be. Papa “Ace” (Preston) is an irresponsible mental child — albeit a onetime real-deal rodeo star as well, who keeps eating up Curly’s money-tree generosity in grand schemes that may probably will not extend to his latest: prospecting for minerals in Australia. Meanwhile, the siblings’ heard-it-all-before mom Lupino, who long ago fled the marital coop, is running the knick-knack register at one of Curly’s “shops” in a construction endeavor that earns him no little money but perhaps not a whole lot of respect. Junior matter-of-factly balks at the offer of a cushy job with the business, apparently preferring to nurse body bruises from unfriendly four-legged creatures.

The movie exudes an extraordinary sense of community, with added autobiographical touches here and there, including one McQueen-Preston gesture involving a hat that I’ve never forgotten over the years. Both virtues come through in Rosebrook’s authentic dialogue (sparked by actors who can really deliver it) — and the predominantly nonverbal flair of an elaborate barroom brawl and an earlier parade sequence that’s the best of its type I’ve ever seen on screen. These kinds of sequences are not easy to shoot (the brawl packs a few dozen participants into a cramped widescreen frame), but Peckinpah gave them lots of coverage, which at least one of his editors had always stressed was the way to go.

The project, which came together quickly, is one that McQueen especially coveted as one that would make certain audiences take him seriously as an actor when, in actuality, he had one of the most readably nuanced screen faces of anyone who ever stepped in front of the camera. This is one of his best jobs ever, but rodeo pics were inevitably a tough sell in taste-making geographical regions (I suspect that Nicholas Ray’s as extraordinary The Lusty Men had troubles of its own knocking down 1952 turnstiles). Peckinpah’s take on the genre is extraordinary as well but in quiet ways that camouflage its full virtues. This said, the included coming attraction and TV trailers make it look like a feature-length bundle of clichés and fail to emphasize the extraordinary cast Peckinpah had at his disposal.

Thus, it has always remained for revisionists for trumpet its considerable virtues, and, in fact, Junior Bonner was the very first movie I ever programmed upon launching nearly a decade of daily programming and almost as many whiplashing calendar changes at the AFI Theater in Washington, D.C. Offering the commentary are definitive Peckinpah experts Nick Redman, Paul Seydor, Garner Simmons and David Weddle, who long ago established themselves as the go-to crew on Sam-related voiceovers, no matter which distributor is behind the home release. Rosebrook, who can easily spin an anecdote, rates a half-hour of his own, and another featurette of similar length features an array of actors (L.Q. Jones, Ernie Borgnine and the expected usual suspects) who worked with Peckinpah and lived (though perhaps at times without their livers) to tell about it. One Kris Kristofferson anecdote — about Bob Dylan’s reaction to Peckinpah’s creative response to some faulty lab work on Pat Garrett and Billy the Kid — is by itself worth the price of admission.