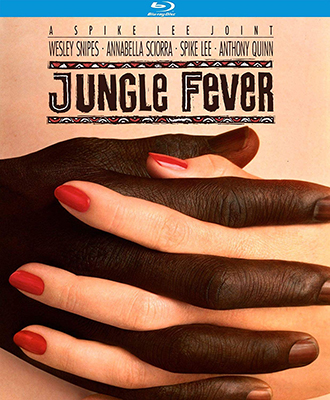 A whole big bunch of things are much easier to accomplish than figuring out just what the genre of this ambitious 1991 Spike Lee potpourri is, which means that “Romantic Social Drama” will have to do for now. Though Jungle Fever is a movie I really like and possibly more to the point, really enjoy, I do wonder about the second feature Lee made after the outrageous failure of Do the Right Thing to win the Best Picture Oscar a couple years earlier. Yet if I overrated Fever in my original USA Today review, it still scintillates for me in a way that several best picture winners of the past 20 years have not (though, no, this wasn’t the case with Parasite). Yet, it’s on the messy side, as well as the first historical indication I had of a problem that has plagued the writer-director’s features throughout his career (though not, I would add, his great documentaries).

This is the tendency of Lee to overstuff his narratives (and the running times that usually go along with this) to a degree that would altogether wreck a lot of pictures that lack most of his filmography’s redemptive drive, dependably provocative subject matter, imaginative smorgasbord-like casting and sheer filmmaking passion. Never has that been more true than here, where there are two distinctive storylines that Lee can’t find a way to mesh without large 1.85 seams showing — even if they do feature (but don’t always emphasize to equal degree) at least some of the same characters. In fact, even within the same storyline, the movie sometimes stops to digress, as when a spurned light-skinned Harlem wife (Lonette McKee) and her women friends spend maybe 10 minutes bandying about the frequent tendency of black men to pursue white women in a way that complicates matters for everyone. It doesn’t quite stop the picture but just misses doing so.

Interracial “jungle” attraction is indeed Fever’s main thrust, as McKee’s otherwise sturdy architect husband (Wesley Snipes) shoots past the 98.6 standard with his new Italian temp/secretary (Annabella Sciorra), a Bensonhurst native whose hiring he initially resisted. This is all happening during a period of Snipes resentment toward his white superiors, who are going the namby-pamby route to foil his partnership aspirations despite the highly visible contributions he has made to the firm. Tim Robbins and a cleaned-up Brad Dourif have these roles, and can Robbins ever play this kind of smoothie in his sleep. Snipes ends up getting himself in what one would assume to be financial peril from the accumulation of these events, though this presumed cause-effect is curiously unaddressed.

What is addressed is the racist cretinism of Sciorra’s father and brother, Italian stereotypes of a certain sub-breed who unfortunately don’t come off as stereotypes here — or at least in the way that an unbridled Anthony Quinn (one of those Quinn performances where he risks a hernia reading his dialogue) does playing John Turturro’s oppressive father. Turturro, as the spurned Sciorra boyfriend who works the counter in the family neighborhood drug store, is the sole voice of reason despite getting no help from his own black-hating buddies, who include the Sciorra brothers. Turturro will have nothing of the latter vitriol and despite his pain over having been dumped, is toying with asking out a frequent black store customer who encourages his self-improvement regimen (the exceptionally attractive Tyra Ferrell).

The movie’s in-name-only other half rates significantly less than 50% screen time but nonetheless provides Jungle with its one indisputably great claim to fame. Nowadays, Samuel L. Jackson is so ubiquitous that if you’re in bed having one of those surreal Melatonin dreams at night, he’s as likely as not to show up in it, even if the dream’s setting is, say, your boss’s toddler daughter’s birthday party. But there was a time when he wasn’t well known, and his performance as Snipes’ crackhead brother so ambushed critics and audiences that, to give one example, the Cannes Film Festival created its first supporting actor award just so that Jackson could be recognized. He’d been around in small roles — there’d even been an appearance in GoodFellas the year previously — but nothing like this. It was something akin to when a relatively obscure Morgan Freeman got cast as a pimp in 1987’s Street Smart from the more often than not ignominious Cannon Films and made such a striking surprise impression that he eventually got an Oscar nomination.

Compared to brother Snipes and, for that matter, nearly everyone else in the picture, Jackson is the bad seed — regularly putting the financial touch on his desperate but enabling mother (Ruby Dee) after his father (Ossie Davis) long ago forbade him even to enter their home. Sometimes, mom’s out of enough cookie-jar money, so dad’s color TV will have to do, whose theft will provide either solace or the funds to go up his nose in a street-side crack den in the company of his companion (Halle Berry — does this movie have a cast or what)? This leads to the movie’s most powerful set piece when Snipes, as a favor to mother Dee, pounds the pavement to find Jackson as Stevie Wonder’s timeless “Living for the City” provides the musical backdrop.

I would have thought, by 1991 and with an entire Wonder score, the movie would have a stereo track, and matter of fact, there’s one listed at the end of the glorious end credits (more on these in a second). This Blu-ray doesn’t, nor is there any commentary nor much to speak of in terms of chapter stops, which I’m speculating is true as well with other Universal-released Lees that Kino has just issued and that I’m hot to re-see: Mo’ Better Blues; Crooklyn; and Clockers. Also not here is (and I think it would have been) is that great sweaty blacksmith coda — amusingly purloined from Jack Webb’s old Mark VII Productions — that signified one of Lee’s 40 Acres and a Mule Filmworks productions.

But in any rendering, Fever’s exit music is “Feeding Off the Love of the Land,” my favorite Stevie ballad ever and for some reason a song not on the original soundtrack CD, an omission that rated a zillion-decibel string of profanities from me in 1991 before it much later showed up on a couple of pricey Wonder sets. (Motown released it as a single, but I suspect it was without the strings that Spike’s musician father Bill Lee added for the movie’s version, which I personally think “makes” the finale.)  I also love the way its lyrics splash across the screen a line at the time, an effect I don’t think I’ve ever seen in any other movie. It’s a very powerful way to send audiences home (or wrap up a viewing-room evening) — even if, as frequently compelling as Jungle is, a viewer can be forgiven for wondering what exactly he or she has just seen.